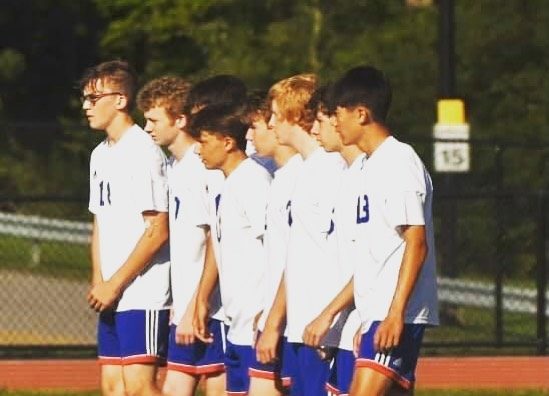 PORT ALLEGANY, Pa. – Jacob Hootfallen’s first-half penalty kick goal proved to be all No. 6 seed Coudersport needed in a 1-0 win over No. 3 seed Port Allegany in the District 9 Class 1A boys soccer quarterfinals.

Hootfallen’s tally came at the 21-minute mark of the first half.

Ethan Ross came up huge in net for the Falcons, making 21 stops, while Ty Guilds had 16 stops for Port Allegany.

With the win, the Falcons advance to play No. 7 seed Elk County Catholic in the quarterfinals. The Crusaders were a 4-2 winner over No. 2 Clarion-Limestone.

Timmy Brannock got the scoring going less than two minutes into the game for ECC, and they were off to the races.

Tanner Pasi made the score 2-0 less than 10 minutes into the contest.

The Lions got on the board as Nate Megnin scored off a Bailee Verdill corner to make it 2-1.

The Crusaders weren’t done in the first half, however, as Anthony Messineo immediately responded to make it 3-1.

KANE, Pa. – Kane’s offense was firing on all cylinders, as Josh Greville scored four goals in a 6-2 quarterfinal win over Redbank Valley.

The game was tied 2-2 at the half before Kane scored four unanswered goals over the final 40 minutes.

Ethan Illerbrun had a pair of goals for the Wolves.

Jon Mishic and Kayden Miller had two assists each for Kane, while Aidan Markert had one helper.

For Redbank, Owen Clouse, who set the single-season scoring record for the Bulldogs this season, had both goals. Ty Carrier and Owen Harmon had the assists.

TITUSVILLE, Pa. – Eisenhower jumped out to an early lead, then held off a late-game push to come away with a 2-1 win over Cambridge Springs in their District 10 Class 1A Quarterfinal match.

Julia Gesing scored less than two minutes into the match after Elley Eastman ran down a ball on the sideline deep in Blue Devils territory. Eastman sent a crossing pass right to Gesing’s foot and she buried it for a 1-0 lead.

Eastman was at it again 15 minutes later when she tracked down another deep ball. This time, she sent it to Katie Bunk who shot it over Madison Yanc to make it 2-0.

That score held until just 3:57 remained in the match.

Following a collision just in front of the net, Cambridge Springs was awarded a penalty kick. Makenzie Yanc tucked the ball in the left post just past a diving Tracey Jakubczak to cut the lead to 2-1.

The Blue Devils made a late push in the final minute, but the Knights didn’t allow them to get a shot on goal and held on for the win.

Eisenhower will face Seneca in the semifinals on Thursday at 3:30 p.m. in Titusville.

WATTSBURG, Pa. – Top-seeded Villa Maria looked every bit the part of a District 10 title favorie with a 12-2 quarterfinal win over eighth-seeded Greenville.

Ella Raimondi had a monster game for the Victors, tallying five goals and assisting on four others.

Greenville actually led 1-0 on a Tori Swank goal in the first half, but Callie Cacchione responded quickly and the Victors were off to the races.

Cacchione tallied a pair of goals, as did Alexa Tojaga.

Swank had both of Greenville’s goals.

With the win, the Victors advance to play No. 4 seed Slippery Rock in the quarterfinals.

WATTSBURG, Pa. – It took a shootout, but No. 3 seed Fort LeBoeuf was able to outlast No. 6 seed Mercyhurst Prep.

Madi Alexander got the game-winner in the shootout for the Bison.

Both team scored a goal in each half, as LeBoeuf’s Emily Samluk and Prep’s Rebecka Habursky scored in the first half.

In the second half, it was Prep’s Erin Matlock scoring and LeBoeuf’s Elisa Cacchione tying the game.

TITUSVILLE, Pa. – Eve Miller’s goal on a corner kick from Hillary Burtner proved to be the difference as Slippery Rock earned a 3-1 win over Harbor Creek.

Amanda Lewis scored the first goal of the game with 15 minutes left in the first half to give the Rockets a 1-0 lead.

Harbor Creek responded courtesy of a penalty kick goal to even things up at 1-1, setting up the go-ahead corner kick goal.

Emma Hays gave the Rockets some insurance with the Rockets’ third tally of the game.

Brooklyn Respecki scored a pair of goals for GM in the win.

Annie Thayer and Maisee Carrier scored a goal in each half for Fairview.

With the win, the Lancers advance to play No. 3 seed Fort LeBoeuf in the quarterfinals.

McDowell Rolls to Yet Another District 10 Class 4A Volleyball Championship
2021 D9 Volleyball Playoffs: Otto-Eldred, Coudersport, Cranberry Advance to Quarterfinals
We use cookies on our website to give you the most relevant experience by remembering your preferences and repeat visits. By clicking “Accept All”, you consent to the use of ALL the cookies. However, you may visit "Cookie Settings" to provide a controlled consent.
Cookie SettingsAccept All
Manage consent