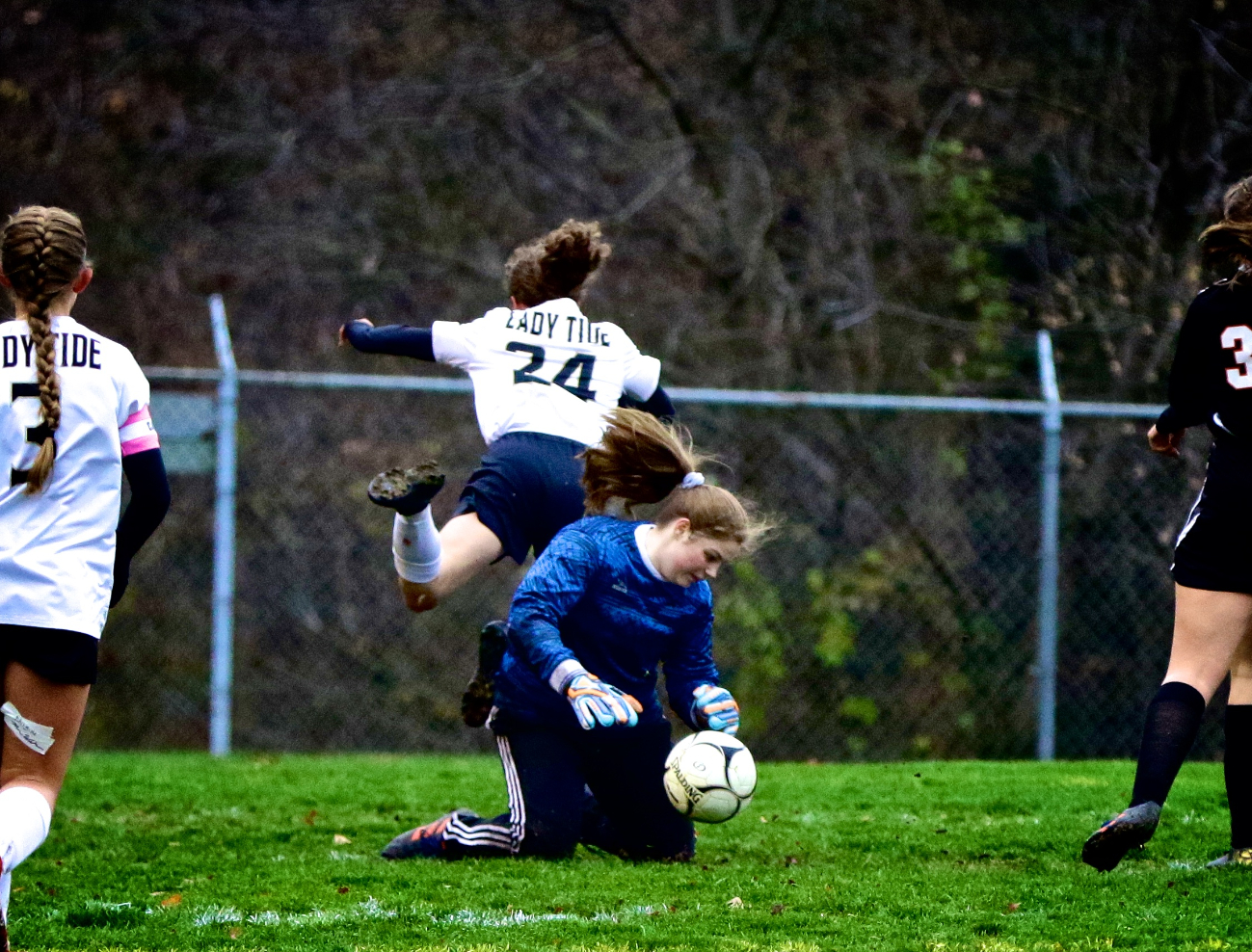 Clarion's Chesney Boggess slides to make a save. Photo couresty of Matt Lerch.

CLARION, Pa. – Lexi Coull recorded her first-half hat trick and the Clarion Area Bobcats girls’ soccer team earned what is believed to be its first playoff win since the program began, beating Curwensville 4-1 on Monday at Clarion.

In the first two minutes of the game, Alex Leadbetter crossed a pass to striker Coull, who scored top shelf for an early 1-0 lead.

Several minutes later Curwensville scored when the Golden Tide were awarded a free kick just outside the goal box. The original kick was stopped by Bobcat Goalie Chesney Boggess, but the ball bounced out of her grasp for an awaiting opponent who scored on the rebound.

The No. 4 seed Bobcats worked tirelessly, trying to make an opportunity for another quick strike. Rightwing captain Emily Grabiak took advantage of an open pass opportunity, popping the ball over the Curwensville defense where a speeding Coull found the ball and herself only facing the goalie. She scored for a 2-1 lead.

Coull still had some magic in the first half as midfielder Evelyn Lerch squirted the ball through the defense for a copycat goal again by Coull, giving her a hat trick and a 3-1 halftime advantage for the Bobcats.

Lerch intercepted the ball from a clearing attempt and shot a bullet just over the top of the goal. Coull took the ball on her possible fourth goal with the ball bouncing over the muddy and bumpy field when it was struck by her knee instead of her foot. The ball was stopped by the Curwensville keeper but Grabiak was there to clean up the rebound by shooting the ball to the left side of the goal for a 4-1 lead.

Lerch then found herself freed for one last attempt as she erupted through the defense. In hot pursuit, the Curwensville defender fouled Lerch from behind at full speed. Lerch was down and has an injury that will likely keep her out the rest of the season. A red card was given on the play.

Boggess ended the game with 15 saves on goal.

With the win, Clarion advances to play top-seed Redbank Valley in New Bethlehem at 4 p.m. Wednesday.

CLASS 1A GIRLS FIRST ROUND

PORT ALLEGANY, Pa. – The Port Allegany girls team scored three unanswered goals in the second half to knock off Elk County Catholic, 3-2, in the first round of the District 9 Class A playoffs on Monday.

No. 6 seed Elk County Catholic’ Gina Carnovale scored on a penalty kick with one second left in the first half to put the Crusaders up 1-0, but the lead proved to be short-lived.

Evin Stauffer scored five minutes into the second half, and Bree Garzel scored 10 minutes later on a penalty kick to give Port, the No. 3 seed, a 3-0 lead.

With seven minutes to play Gracie Archer scored on an assist from Garzel to make it 3-1.

Rylie Belsole got ECC back within one less than 30 seconds later, but the Gators were able to hold them off to preserve the win.

Jenn Baxter was the winning keeper with six saves, while Karalyn VanEerden made six saves for the Gators.

Port Allegany advances to play Brockway, the No. 2 seed, at 7 p.m. on Wednesday.

CLASS 1A BOYS FIRST ROUND

COUDERSPORT, Pa. – Christian Furman recorded a hat trick and the Falcons broke open a 1-1- halftime tie en route to a 4-1 win over Brookville on Monday in the first round of the District 9 Class 1A boys soccer playoffs.

Furman scored off a corner kick with 2:22 to go in the first half to give the Falcons a 1-0 lead, but Brookville responded, scoring with 1:15 to go in the half to tie it.

Owen Ott scored what proved to be the game-winning goal for the Falcons nine minutes into the second half.

Furman scored goals No. 2 and 3 with 19:14 to go and with just under four minutes remaining in regulation.

The No. 4 seed Falcons advance to play top-seeded Brockway on Wednesday at Brockway, with a 5 p.m. scheduled start time.

(Andy Close contributed to this story)

District 9 Releases Volleyball Playoff Brackets
Johnsonburg Out of D9 VB Playoffs Because of COVID-19; Issues at Ridgway Could Impact Brookville Football
We use cookies on our website to give you the most relevant experience by remembering your preferences and repeat visits. By clicking “Accept All”, you consent to the use of ALL the cookies. However, you may visit "Cookie Settings" to provide a controlled consent.
Cookie SettingsAccept All
Manage consent