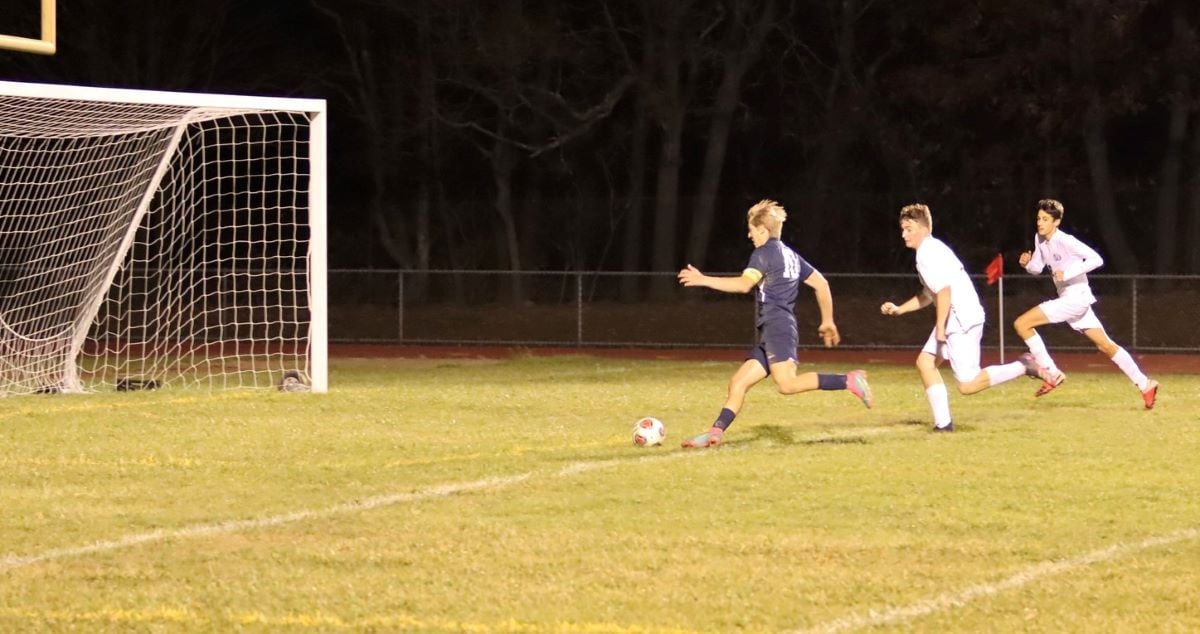 Clarion-Limestone's Bailee Verdill gets set to shoot on a breakaway against Brookville. Photo by Maria Wilson.

STRATTANVILLE, Pa. – No. 1 seed Clarion-Limestone got a balanced offensive effort in a 3-1 Class 1A quarterfinal win over No. 9 seed Brookville.

Clarion-Limestone led 1-0 at the half on Boyden’s goal.

The Raiders were playing their second game in as many days after beating Brockway 2-1 in their opening-round game.

Maddox Harmon scored to tie the game early in the second half for the Raiders, but Bettwy’s goal gave C-L the lead for good.

With the win, C-L advances to play Elk County Catholic in the semifinals.

NEW BETHLEHEM, Pa. – Jayce Lechien scored on a header off of an Aaron Myers throw in overtime to lift No. 7 seed Ridgway to a win over No. 2 Redbank Valley in the Class 1A quarterfinals.

The Elkers trailed 2-1, but tied the game with Sam McCurdy’s goal with 25 seconds left in regulation.

After a scoreless first half, Ridgway’s Jack Benninger’s direct kick was deflected by Myers and into the back of the net 10 minutes into the second half.

Redbank Valley tied the game with 11:57 remaining on Mason Clouse’s penalty kick and then took a 2-1 lead on Clouse’s second goal of the game off a feed from Owen Harmon

KERSEY, Pa. – Lance O’Neil’s second-half goal proved to be all Elk County Catholic needed in a 1-0 Class 1A quarterfinal win over Port Allegany.

Sagan Beaver had the clean sheet in net for the Crusaders.

TITUSVILLE, Pa. – A 5-goal outburst in a five-minute span midway through the first half propelled Mercer to a 12-1 win over Eisenhower in their District 10 Class 1A boys soccer quarterfinal.

Already leading 3-0, the Mustangs got three goals from Cole Cunningham and one each from Garrett Thumm and Max Ellis in 5:26 to extend the lead to 8-0 and essentially put the match away. Ellis also had a first-half hat trick.

With just under nine minutes to play, Eisenhower’s Logan Degnan got behind the Mercer defense and buried a shot near post to put the Knights on the board.

Mercer will play Wilmington in the semifinals on Thursday.

MEADVILLE, Pa. – Dakota Longo scored the game-winner in double overtime as Iroquois earned a thrilling 2-1 win over Sharpsville in the Class 1A quarterfinals.

TITUSVILLE, Pa. – For 180 regular season minutes, plus another 25:44 to start the postseason, Eisenhower and Seneca girls soccer had combined for one goal against each other.

Two goals separated by less than 120 seconds proved to be the difference Tuesday as the Bobcats held on to beat the Knights, 3-2, in their District 10 Class 1A girls’ soccer quarterfinal.

Just about 17 minutes into the second half, Elley Eastman’s goal cut Seneca’s lead to 2-1. Just over a minute later, a quick change of possession put the ball on Alara Bem’s foot. She passed ahead to Taylor Bunce who outran the defense and tucked a low liner inside the near post to give Seneca a 2-goal advantage.

The Knights got a late goal from Julie Gesing, but couldn’t get the equalizer.

Tuesday’s playoff match started much the same way both regular season matches had gone, with neither team able to find the back of the net.

The Bobcats held a possession advantage through much of the half and finally broke through in the 25th minute.

A turnover in front of the net ended with Ave Pushchak gaining possession. She sent a bouncing shot through the defense that appeared to catch Eisenhower keeper Tracey Jakubczak off guard thanks to the scrum of players in front.

Seven minutes later, the Bobcats capitalized on another turnover.

Hailee Dolph poked the ball away from Samantha Childs pinching in on the attack and played catch with Pushchak down the left side and into the offensive zone. Dolph sent a centering pass intended for Katelynn Gottschling. Gottschling couldn’t handle the pass cleanly, but the ball bounced right to Pushchak who sent a rising shot to the far post just past Jakubczak’s outstretched hand for a 2-0 lead.

With just over 3:30 to play in the first half, the Knights had a quality scoring chance. Gesing sent a long-range shot on net. Katie Bunk was in front and tried to head it in, the ball hit off the crossbar and came straight down without crossing the goal line to keep it a 2-0 game at the half.

Eisenhower got its first goal of the season against Seneca 17 minutes into the second half. Cassie Smelko took a free kick from 38 yards out. She sent a bending shot right to the front of the net. Eastman bodied the ball on the bounce to the far post. The ball hit the post, then crossed back and fell inside the net to make it 2-1.

Seneca’s Sage Slowikowski was called for a push with 11:30 to play. Smelko again took the free kick, this time from 47 yards in the center of the field. Her kick was wide of the net, but Eastman was there to collect and center. Eastman’s pass went off a Bobcat and right to Gesing who buried it near post for the final goal of the match.

The Bobcats were able to withstand additional pressure following the Gesing goal, then flipped the field and spent most of the final five minutes in the offensive zone.

Eisenhower had one last chance after Seneca was called for a handball with 20 seconds to play. Smelko took the kick and tried to set up Eastman as she had done on the previous goal. This time the ball rolled out of play and time expired.

Seneca will take on Girard, a 2-1 upset winner over defending D10 champion Mercer, in the semifinals on Thursday.

MEADVILLE, Pa. – Makenzie Yanc had two goals and an assist as Cambridge Springs blanked Wilmington, 5-0 in the Class 1A quarterfinals.

The Blue Devils led 3-0 at the half on goals by Yanc, Maggie Braymer, and Kylie Beck.

Isobel Yasenchak and Yanc scored in the second half for Cambridge Springs.

With the win, Cambridge Springs advances to play No. 1 seed Mercyhurst Prep, which received a bye, in the semifinals.

TITUSVILLE, Pa. – Madison Soudan had both Girard goals as the seventh-seeded Yellow Jackets knocked off No. 2 seed Mercer 2-1 in the Class 1A quarterfinals.

Katie Brocious had an assist for the Yellow Jackets.

Oct. 25, 2022 Pizza Hut Scoreboard: Volleyball/Soccer
Oct. 25 D10 Volleyball Playoffs: Top Seeds Maplewood, West Middlesex, Cochranton Advance in Class 1A
This website or its third-party tools process personal data.In case of sale of your personal information, you may opt out by using the link Do not sell my personal information.
×
Manage consent