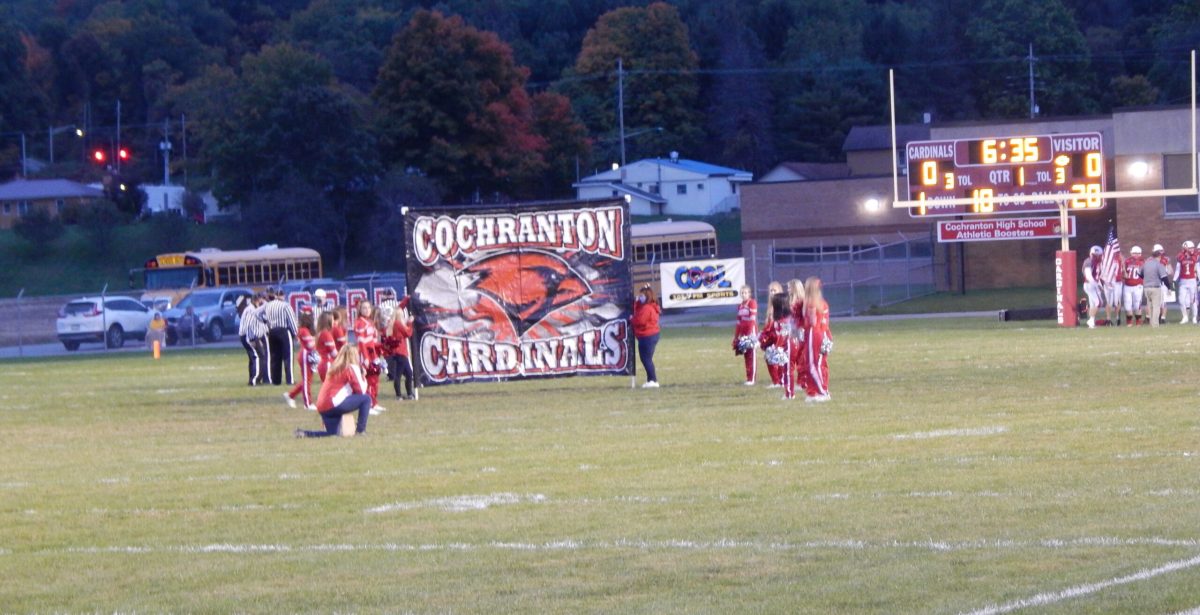 MEADVILLE, Pa. – Wakeem Page had a pair of fumble returns for touchdowns as Cathedral Prep put an end to Meadville’s shutout streak in a big way, beating the Bulldogs 62-28.

Meadville had shut out its last four opponents, all Region 5 games. The game was one of three in District 10 in Week 9 involving teams with winning records.

Carter Barnes threw for three touchdowns and rushed for two more, while Mike Parks had 142 yards and a pair of scores on the ground.

Prep led 48-14 at halftime, both of Page’s fumble returns came in the opening 24 minutes. Page also caught a 15-yard touchdown pass from Barnes.

Khalon Simmons had another big game on the ground for Meadville, rushing for 197 yards and two touchdowns – both of which came in the first half on runs of 48 and 66 yards.

Brady Walker and Griffin Buzzell also had rushing touchdowns for the Bulldogs.

GUYS MILLS, Pa. – A touchdown pass from Wyatt Lookenhouse to Camron Jakubczak on a fake field goal in the third quarter gave Eisenhower the lead for good in a muddy 15-7 win at Maplewood.

The Knights, trailing 7-3, were facing a fourth down at the Tigers’ 26 with 1:35 left in the third. Jake Venman came out, ostensibly to attempt his second field goal of the game, but on the snap Lookenhouse took the ball and threw to Jakubczak in the end zone to give Eisenhower a 9-7 advantage.

Shawn Pascuzzi’s 2-yard TD run in the fourth quarter made it a one-touchdown game and Cole Kellogg’s interception with just under two minutes to play sealed the win.

Venman’s 34-yard field goal in the second quarter gave Eisenhower a 3-0 lead, but Maplewood answered with a 2-yard Ben Giliberto run on fourth-and-goal to take a 7-3 lead.

Pascuzzi and Lookenhouse combined to go 3-10 passing for 38 yards. Lookenhouse caught a pass for 14 yards, and his toss to Jakubczak on the fake field goal went for 26 yards

GREENVILLE, Pa. – After a scoreless first half, Sharpsville outlasted Reynolds 21-7 in a defensive slugfest.

Ian Smith broke the scoreless tie for Sharpsville with a 19-yard touchdown run at the 7:51 mark of the third quarter.

Reynolds responded just over a minute later, getting on the board courtesy of a Brayden McCloskey 48-yard pass to Haydin McLaughlin.

Sharpsville put the finishing touches on the game moments later, however, as Caullin Summers tossed a 38-yard touchdown pass to Garen Levis.

Roth finished with 125 yards on the ground and Smith 72 for the Blue Devils, while Summers had 101 yards through the air.

SAEGERTOWN, Pa. – Jack Martinec had another big game to help Cochranton clinch a share of the Region 2 title with a 37-0 win over Saegertown.

The Cardinals led 22-0 at halftime.

Stephen Martinec also had a rushing touchdowns for the Cardinals and eclipsed 100 yards on the ground.

FAIRVIEW, Pa. – Ryan Tewell threw for six touchdowns as Northwestern clinched a share of the Region 2 title with a 60-8 win over Iroquois.

Three of Tewell’s touchdown passes went to Jake Kelley, while Eric Steinle, Cam Perkins and Eric Dorr were also on the receiving end of scores.

Tewell finished with 217 yards through the air.

Northwestern led 28-8 at halftime, outsourcing the Braves 32-0 in the second half.

Kelly had 75 yards receiving to lead the Wildcats.

Allen, meanwhile, had another strong game on the ground with 100 yards and a score. Ryan Montgomery and Andrew Massella also had rushing touchdowns.

FARRELL, Pa. – A week off did nothing to slow down Farrell, as the Steelers led 50-0 at halftime en route to a 78-8 win over Kennedy Catholic.

The Steelers had now outscored their opponents 354-14 on the season.

Anthony Stallworth scored on touchdown runs of 15 and 44 yards for Farrell, while Omar Stewart caught a pair of touchdown passes from Trian Holden.

Kylon Wilson had a receiving touchdown (on a pass from Holden) and also returned an interception for a touchdown.

Anthony Jackson and Lamont Samules also had rushing touchdowns for the Steelers.

Kyler Shaffer starred again for the Bears. The senior quarterback accounted for all three Union City scores, two passing and one rushing. Shaffer had 22 carries for 184 yards, including an 85-yard TD run in the second quarter. He was also 6-16 passing for 112 yards.

Shaffer connected with Jesse Kightlinger on an 8-yard TD pass in the first quarter and found Owen Keens from 10 yards out in the third.

The win kept the Blue Devils squarely in the playoff picture, while Union City finishes the season at 0-7.

Edwards rushed for 146 yards, while Tuff McConahy threw for 200 yards and two touchdown passes to Cole McCallister and Davis Phanco.

ERIE, Pa. – Anthony Nemec accounted for three touchdowns and had 100 yards on the ground as Grove City won its fifth-straight game, 42-8 over Mercyhurst Prep.

Nemec scored on a 52-yard run and 3-yard scamper and also caught a 25-yard pass from Hunter Hohman.

Hohman threw three touchdown passes, connecting with a 10-yarder to Gavin Lutz and a 60-yard strike to Anthony Pereira.

Luciano Trezona scored on a second-half touchdown run to cap the GC scoring, while Aronde Bridgett got Mercyhurst Prep on the board with a late touchdown run.

CORRY, Pa. – Logan Woods threw for six touchdowns as Hickory rolled to a 45-7 win over Corry.

Nolan Carey had a rushing touchdown for Corry.

WATERFORD, Pa. – Fort LeBoeuf scored 42 points in the first half en route to a 56-27 win over Conneaut (Ohio).

The Bison once again did all of their work on the ground, as Tristin Harris, Adam Lichtinger, Justin Leuschen and Connor McChesney all scored rushing touchdowns.

Harris had a monster game, rushing for 247 yards and three touchdowns, while Lichtinger had 100 yards and a pair of scores.

The Bison scored half of their points (28) in the first quarter.

Zack Rice scored a pair of second-half touchdowns for the Spartans and finished with 131 yards on the ground and added a third touchdown receiving. Kiefer Mandagelo also had a touchdown toss to Levi Corlew.

LINESVILLE, Pa. – McDowell scored 42 points in the first quarter on its way to a 62-0 win over Conneaut (Pa.).

Trey Goodwine had a pair of receiving touchdowns, one each from Ben Moore and Christian Santiago.

Melvin Ryan added a rushing touchdown for the Tigers and Mikey Rodriques tossed a score to Daryan Allen.

HARBORCREEK, Pa. – Greenville scored all 13 of its points in the second quarter en route to a 13-6 win over Harbor Creek.

Sasala had 100 yards on the ground for Greenville.

Heath Betza had a touchdown run for Harbor Creek in the first quarter.

District 9 and District 10 Football Live Scoreboard – Week 9 2021 (Oct. 21-23)
Keystone Claims D9 South Title
This website or its third-party tools process personal data.In case of sale of your personal information, you may opt out by using the link Do not sell my personal information.
×
Manage consent