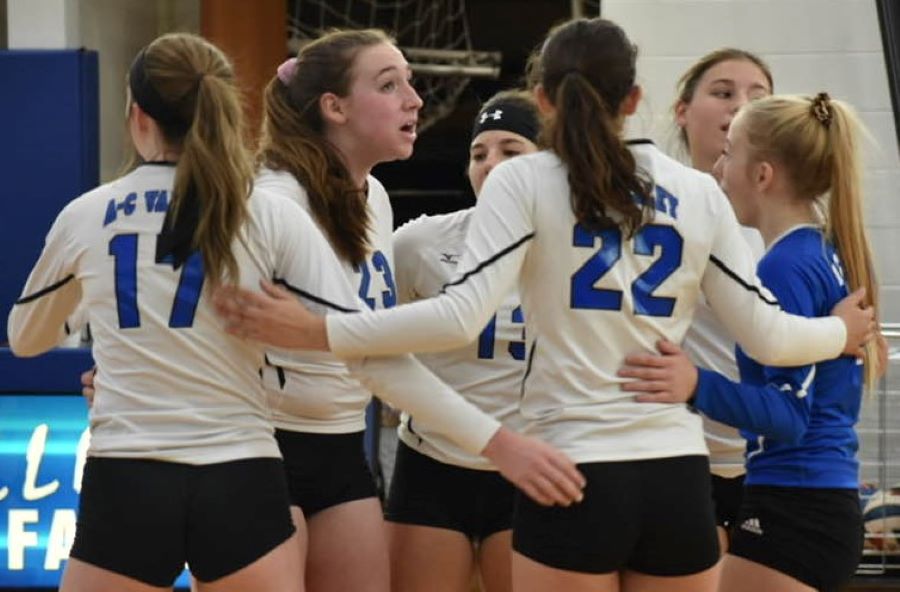 Mia Sherman added 10 kills and five digs for the Lady Falcons who also got four kills and nine digs from Meah Ielase and 14 digs from Rachel Cullen.

Tarra Stefanacci ran the offense with 27 set assists and contributed four digs and two kills in the victory.

Ivie Scott added nine kills and an ace for the Lady Warriors who also got seven aces from Sophia Tennent and seven kills and two blocks from Ciona DePrano.

Logan Barnhart ran the offense for Moniteau with 30 set assists.

Sadie Thomas added eight kills and Madison Vergona five kills for the Tigers, who also got 14 digs from Madison Crawford.

Bailey Varndell piloted the offense for Maplewood with 26 set assists.

Tami Geci led the defense for ECC with 16 digs, while Moira Stanisch ran the offense with 27 set assist while adding two kills and an ace.

Burns hit .842 in the match with zero hitting errors.

Burns led the Lady Cats with 20 kills and added eight digs, while Selfridge chipped in 16 kills and also had 13 digs. Jordan Best paced the defense with 12 digs, and Brenna Campbell ran the offense with 39 set assists while adding six digs.

Emma Toretti had 16 digs for the Lady Beavers, and Eden Galiczynski ran the offense with 32 set assists.

District 10 Tennis Championships: Singles Finalists Set In Class 3A, 2A
You Pick the D9/D10 Volleyball Performance of the Week Powered by Gc Town Properties Oct. 12-17, 2020
This website or its third-party tools process personal data.In case of sale of your personal information, you may opt out by using the link Do not sell my personal information.
×
Manage consent