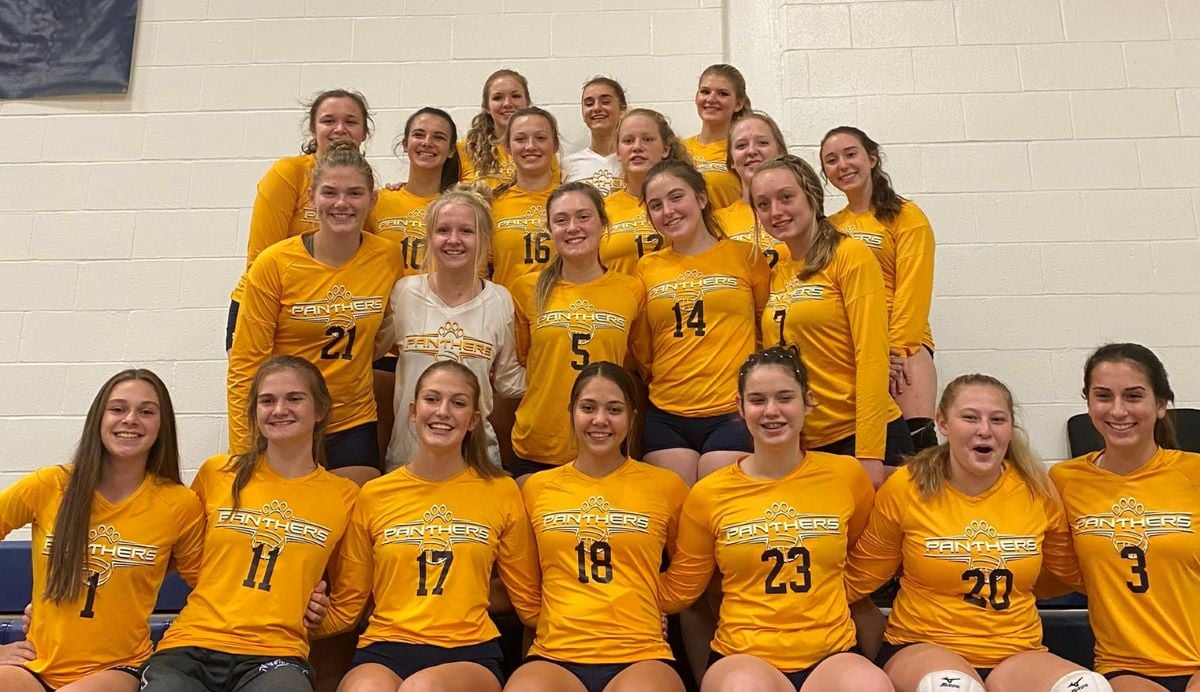 SAEGERTOWN, Pa. – For the first time since 1976, Saegertown can claim a Regional/Division championship.

Averie Braymer led the way for Saegertown with 10 kills, an ace, and a dig, while Brittany Houck had 13 digs, seven kills, and an ace. Ava Jones ran the offense with 20 set assists while adding four digs and three aces. Abby Kirdahy also had nine digs, and Amber Costello had a team-high 16 digs.

Sheeler recorded 25 set assists in the win and also had four aces.

Emmalee Sheeler with her parents Brian and Heather after recording her 1,000 career set assist in Otto-Eldred’s 3-0 win over Austin. Photo by Barb Close

Leech had 22 kills and 19 digs, while Thomas added 19 kills and five aces in the win for the Tigers.

Annabel Sheldon and Kassidy Orinko each had 16 digs for Sheffield with Kadence Steffan adding 13 digs and 26 set assists. Emily Leichtenberger led the offense for the Lady Wolverines with nine kills and Lynzie Grubbs added seven kills and seven blocks.

The victory was Redbank Valley’s eighth in 11 days and moves the Lady Bulldogs to 15-1 on the season.

Olivia English added seven kills, four digs, and an ace for the Dragons, while Isabel Wortman and Kylie Fehlman each had four kills. Fehlman also contributed a pair of blocks.

Hannah Shattuck also played a key role in the win with six kills, three aces, and three digs, and Katie Madigan had 12 digs. Halee Mineweaser ran the offense with 30 set assists and added three aces, two blocks, and a kill.

Adalyn Duncan added 11 kills for the Hornets, while Raeley Gargano had 10. Paige Griffith also played a key role on offense with nine kills.

The Lady Cats, the top-ranked team in the state in Class 1A, also got 11 kills and 10 digs from Erica Selfridge and five kills apiece from Aryana Girvan and Payton Simko. Jordan Best chipped in seven aces and six digs, and Brenna Campbell ran the offense with 34 set assists while adding four aces and two digs.

Johnson had six kills, three blocks, three digs, three aces, and a set assist with Macensky adding five kills, six aces, a dig, a set assists, and a block for the Lady Tigers.

DuBois stats weren’t available but Punxsutawney got 10 kills from Katelyn Griebel and five from Elliott Ferrent, who also had 12 digs.

Emma Smith had a match-high nine kills with Ruby Smith adding eight kills and eight aces for the Lady Lions. Kendall Dunn ran the offense with 22 set assists and also paced the defense with eight digs.

Emily Aites had six kills for North Clarion, while Alana Brooks added 20 digs. Sarah Aaron ran the offense with 12 set assists, and Brenna Thompson was strong at the net with the block.

Brooke Bauer added seven kills for the Lady Crusaders who also got six kills and six digs from Julia AIkens. Tami Geci (15 digs) and Abby Hasselman (14 digs) led the ECC defense, and Moira Stanisch had 30 set assists and three aces in the victory.

Ridgway stats weren’t available, but Bradford got 10 kills from Alix Ordiway and three kills and three blocks from Mikey Langeniese.

Mallory McKimm added four kills and four aces for the Lady Raiders who also got eight kills and three aces from Morgan Lorenzo.

Oct. 15, 2020 Soccer Recaps: C-L Boys Win Overtime Thriller
St. Marys’ Lion/Henry Claim District 9 Doubles Title
We use cookies on our website to give you the most relevant experience by remembering your preferences and repeat visits. By clicking “Accept All”, you consent to the use of ALL the cookies. However, you may visit "Cookie Settings" to provide a controlled consent.
Cookie SettingsAccept All
Manage consent