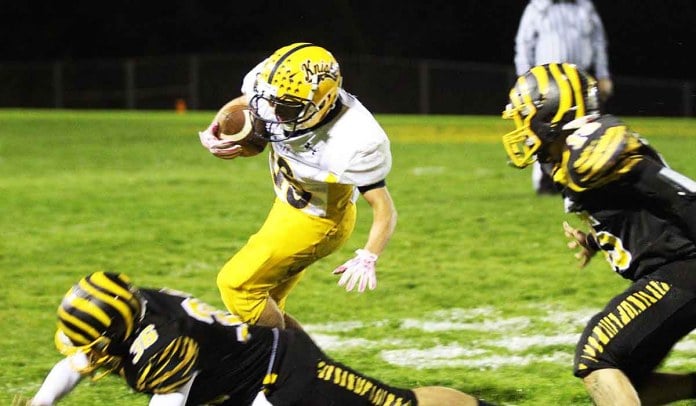 ALBION, Pa. – Shawn Pascuzzi had two rushing touchdowns in the second half and Eisenhower held off Northwestern to clinch at least a share of the Region 2 title with a 31-25 win.

The Knights remain the only beaten team in District 10 at 8-0.

The Wildcats made things interesting late, as Lloyd Fountain connected with Logan Stagl on a 5-yard score with 1:38 to play.

Northwestern recovered the ensuing onside kick and Fountain connected with Kolton Sutton on a 35-yard score with 47 seconds remaining to make it 31-25.

The Knights recovered the second onside kick, however, to preserve the win.

Garrett Jensen was named the Allegheny Grille of Foxburg Player of the Game and talked about the win afteward:

Keegan Eckstrom and Benji Bauer had rushing touchdowns in the first half for the Knights, who led 16-6 at halftime.

Fountain had a 3-yard touchdown run in the first half and his 15-yard touchdown to Landon Wayne made it 16-13 just over a minute into the third quarter.

Bauer finished with 198 yards on the ground for the Knights, while Tucker Lindell had 90.

Fountain finished with 235 yards through the air for the Wildcats, with Wayne accounting for 102 of those yards.

Ben Moore was 6-of-7 through the air for 78 yards and two touchdowns, one to Simmons and the other to Christian Santiago.

Bobby Blue had 50 yards on the ground and a pair of scores for McDowell, while Stephon Porter and Blayze Myers had one touchdown on the ground each.

Trey Goodwine also had a 22-yard interception return for a touchdown for McDowell.

SHEFFIELD, Pa. – Coudersport held Sheffield to negative 11 yards of total offense in a 30-7 victory over the Wolverines.

Ethan Ott, Xander Brown, and Vedder Conyer all had rushing touchdowns for Coudersport, while John Wright also threw a touchdown pass to Brown.

Ott finished with 212 yards on the ground in the win.

Brown had a 4-yard touchdown run in the first quarter and Ott a 54-yarder in the second quarter to give the Falcons a 16-0 lead at halftime on the strength of a safety.as well.

Wright threw a 5-yard touchdown pass to Brown in the third quarter, and Conyer’s 4-yard run to make it 30-0.

Colby Barr’s fourth-quarter touchdown pass to Dylan Hardwick put Sheffield on the board late in the fourth quarter.

Barr finished with 42 yards through the air for the Wolverines.

Watch Live: Eisenhower at Northwestern
Port Allegany’s Evens Named Week Eight District 9 Jim Kelly POW Powered by the Allegheny Grille
This website or its third-party tools process personal data.In case of sale of your personal information, you may opt out by using the link Do not sell my personal information.
×
Manage consent