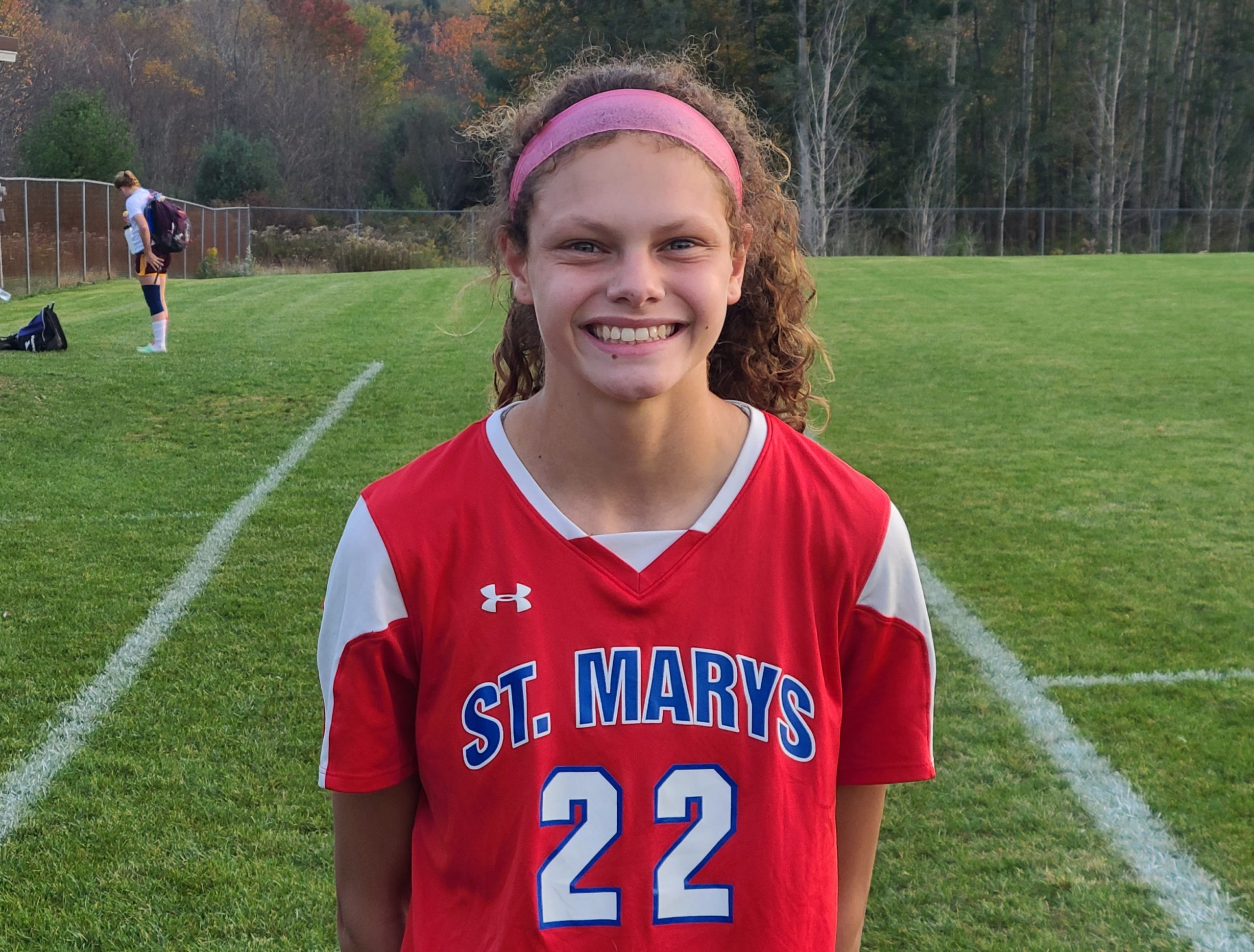 ST. MARYS, Pa. – In their ‘Pink Out’ game, the St. Marys Lady Dutch got two goals from Gabby Pistner in a 4-2 win over crosstown rival Elk County Catholic on Thursday.

Pistner got the Lady Dutch on the board just over 13 minutes into the game off a Gianna Surra corner kick, only to watch as the Lady Crusaders tied the game less than a minute later on a Rylie Belsole goal.

The scoring came fast and furious for St. Marys, as Lucy Hays got behind the defense and was able to beat keeper Allison Geci for a goal to make it 2-1 with 16:21 to go in the half.

Less than a minute later, it was the freshman Pistner who made it 3-1 with her second goal of the game.

Pistner was named the Allegheny Grille of Foxburg Player of the Game and talked about the win afterward:

That 3-1 score held until 16:40 to go in the second half, when Seanna VanAlstine scored for Elk County Catholic to make it 3-2.

The Lady Crusaders seemingly had all the momentum, but St. Marys had a quick counter that resulted in an Anna Lundin goal with less than 10 minutes to go that put the game out of reach.

It was the second win this season for St. Marys over ECC.

Olivia Eckles was credited with 20 stops for St. Marys and Geci 12 for ECC.

Alexa Tojaga and Callie Cacchione had two goals apiece for the Victors, while Kianua Ruiz and Ella Fedor had one each.

Addie Stark and Genevieve Izbicki combined on the shutout in net.

Maddie Cowburn scored two goals and had three assists for the Lady Owls, while Emily Morgan had two assists and Emily Prince one helper.

Paige Smith had the clean sheet in net for Bradford with six saves.

Morgan Miller had a hat trick for the Mustangs, while Devyn Bailey and Mallory White added two goals apiece.

NEW WILMINGTON, Pa. – Ashley Wignall and Reese Walker had three goals each as Wilmington pitched a shutout against Kennedy Catholic.

Henry Kisler had the lone marker of the game for Port Allegany.

Ty Guilds was big in net for the Gators with 22 saves, while Jacob Maze had one stop for the Rovers.

Adam Smith had a difficult-angle goal for the Gremlins and also assisted on one of Smith’s goals. Karns City improved to 11-2 with the win.

FAIRVIEW, Pa. – Josh Howells, Noah Skelly and Nathan Kisiel all had goals as Fairview earned a 3-1 win over North East.

Mike McGuigan had the lone goal for North East.

Keaton Fiddler added three goals for the Yellow Jackets, while Isaiah Schoonover, Nate Edwards and Braxton Johnson had one goal each.

Oct. 14, 2021 VB: Cranberry Gets Big Win over Redbank Valley; Mercyhurst Prep, Fort LeBoeuf, NoPo, ECC Claim Victory
Watch Live: Iroquois at Eisenhower Football Powered by the Allegheny Grille of Foxburg
We use cookies on our website to give you the most relevant experience by remembering your preferences and repeat visits. By clicking “Accept All”, you consent to the use of ALL the cookies. However, you may visit "Cookie Settings" to provide a controlled consent.
Cookie SettingsAccept All
Manage consent