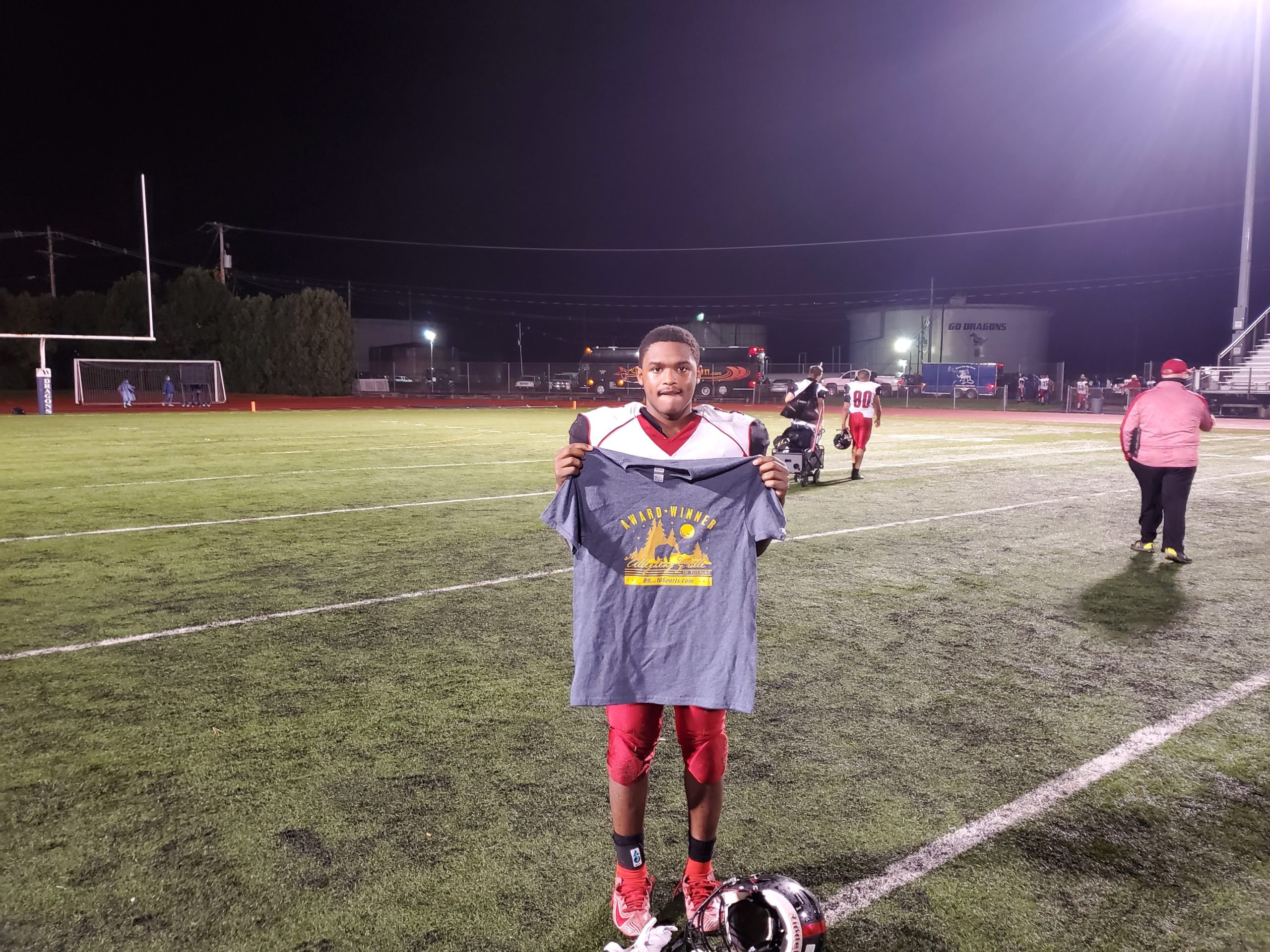 FARRELL, Pa. – Wilmington stopped Farrell on 4th-and-3 from the Greyhounds’ 10-yard line late in the fourth quarter to preserve a 21-20 win.

The win was the second this season for the Greyhounds over the Steelers and gives them the outright Region 1 title.

Trailing 14-13 in the third quarter, Darren Miller broke free on a 40-yard touchdown run for Wilmington (5-0) that, coupled with the 2-point conversion, made it 21-13.

Farrell’s Anthony Stallworth scored his third touchdown of the game on an 8-yard run to make it 21-20 with 8:02 to go in the game, but the extra point attempt was blocked.

Stallworth had another monster game for the Steelers (3-2), as he scored on a 16-yard run in the first half and had a 76-yard receiving touchdown on a pass from Christian Hartley. Stallworth had 167 yards on the ground and Hartley completed five passes for 157 yards.

Luke Edwards and Miller both scored on 4-yard runs in the first half for Wilmington. Ethan Susen had 110 yards rushing for the Greyhounds and Miller 106.

Simmons was one of three Bulldogs (4-1) to surpass 100 yards rushing, as Griffin Buzzell had 161 yards and a score and Tamaj Lyons-Glover had 170 total yards (146 rushing, 34 receiving), a 77-yard rushing touchdown and a receiving score.

Simmons scored a pair of touchdowns in each half on runs of 49 and 15 in the first quarter and 16 and 61 yards in the third quarter.

Leading 14-0 late in the second quarter, Sam Burchard connected with Lyons-Glover with just seven seconds left in the half to make it 21-0.

Simmons was named the Jim Kellly Player of the Game Powered by the Allegheny Grille in Foxburg.

Landon Douvlos had a big second half for the Dragons (1-3), throwing for 161 yards, including a 43-yard touchdown pass to Alex Borger in the fourth quarter.

ALBION, Pa. – Northwestern has been one of District 10’s most pleasant surprises this season, and the Wildcats added to that on Saturday, beating Lakeview to clinch the outright Region 4 title.

The Wildcats (5-0) wasted no time against the Sailors, as Dawson Fiesler returned the opening kickoff for a touchdown and they were off and running.

Calogano Wilkins tied the game with a 45-yard touchdown run, but Cole Bish gave Northwestern the lead back, 14-7, on a 3-yard run in the second quarter.

Preston Runser’s 24-yard field goal made it 17-7, but Lakeview cut the lead to three at the half after a 42-yard touchdown pass from Gavin Murdock to Lane Barber.

Quarterback Ryan Tewell called his own number in the third quarter, scampering in from 18 yards out, followed by a Tewell to Eric Steinle 27-yard touchdown pitch and catch.

GIRARD, Pa. – Jared Gennuso rushed for 115 yards and a touchdown, Tyler Corbin 77 and two scores as Fairview picked up its second win of the season over Girard.

Girard’s Austin Barrett struck first on a 12-yard TD run, but Corbin answered with an 11-yard score of his own to make it 7-7 after a quarter.

Corbin’s 20-yard run in the fourth quarter made it 20-13. Barrett scored late on a 14-yard run, but the 2-point conversion failed.

Barrett had 96 yards on the ground and Bax 80 for Girard.

FRANKLIN, Pa. – Nate Bortnick scored three rushing touchdowns and intercepted a pass on defense as Conneaut (3-1) rolled to a 60-21 win over Franklin.

Bortnick scored on runs of 21 and 19, and his third score made it 54-14 with over eight minutes to go in the third quarter.

Conneaut scored early and often, taking a 41-14 lead at halftime en route to the win.

Watch Live: Meadville at Warren Football
Central Clarion’s German Named Week Five District 9 Jim Kelly Player of the Week Powered by the Allegheny Grille
This website or its third-party tools process personal data.In case of sale of your personal information, you may opt out by using the link Do not sell my personal information.
×
Manage consent