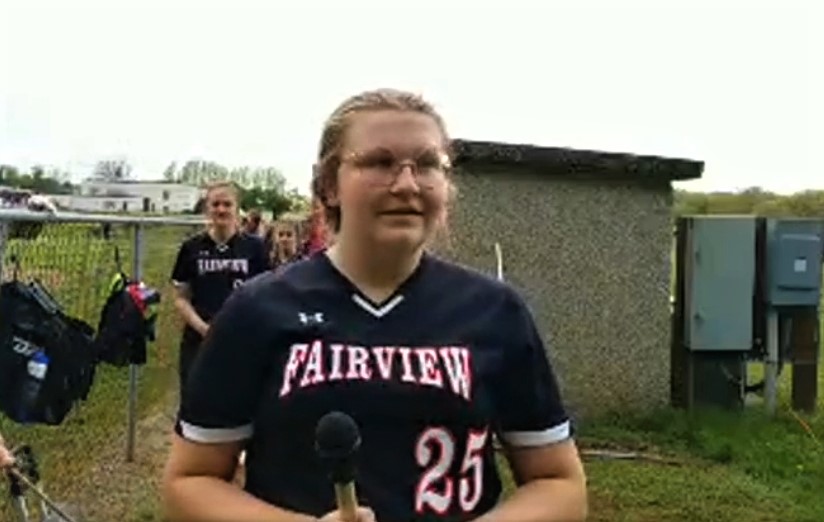 FAIRVIEW, Pa. – Fairview scored two runs in the bottom of the first inning of Tuesday’s Region 3 showdown against North East. Cami Munson made sure they held up.

Munson was brilliant in the circle for the Tigers, tossing a shutout as Fairview beat North East, 2-0.

Yes, those two runs in the first proved to be the only two tallies of the game.

“I thought we would get more runs throughout the game, but the fact that it ended 2-0 worked for us,” Munson said.

Munson was named the Allegheny Grille of Foxburg Player of the Game. You can see her full interview here:

Deena Masterson led off the game with a bunt single, and, on the second pitch of her at-bat, Taylor Polach laced an RBI triple into the left-center gap.

Believe it or not, those were the only two hits that Prather allowed in the game.

Jenna Hanas followed with an RBI groundout, and that was it as far as runs.

Prather retired 14 of the next 16 batters she faced, with the only two Tigers’ to reach base in that span coming courtesy of an error in the second inning and Prather hitting Chloe McManus in the fourth.

Munson breezed through the early innings and was able to escape out of several jams later in the game to keep North East (6-4, 6-4) off the scoreboard.

Prather, who reached base in all four plate appearances, got on via a fielder’s choice and Amelia Svetz walked with two outs in the third, but Munson induced a flyout to end the threat.

In the fifth, Julianna Coletta walked and Prather singled with one out, but Munson got a strikeout and a line out to shortstop Chloe McManus to finish the inning. North East had runners on first and third with one out in the sixth, but again Munson was able to induce a pair of line outs to end the frame.

And she did it again in the seventh.

With one out, Prather singled and Svetz was hit by a pitch. Another two-on, one-out situation was no problem for the Tiger sophomore, as she got fly out and a ground out to end the game.

It was a different game with the same result from the first time the two teams met back on April 8, a 10-9 Fairview win. In that game, there were a combined 23 hits. In this one, there were just six.

Prather was excellent in defeat, allowing just the two hits, walking one, and striking out eight.