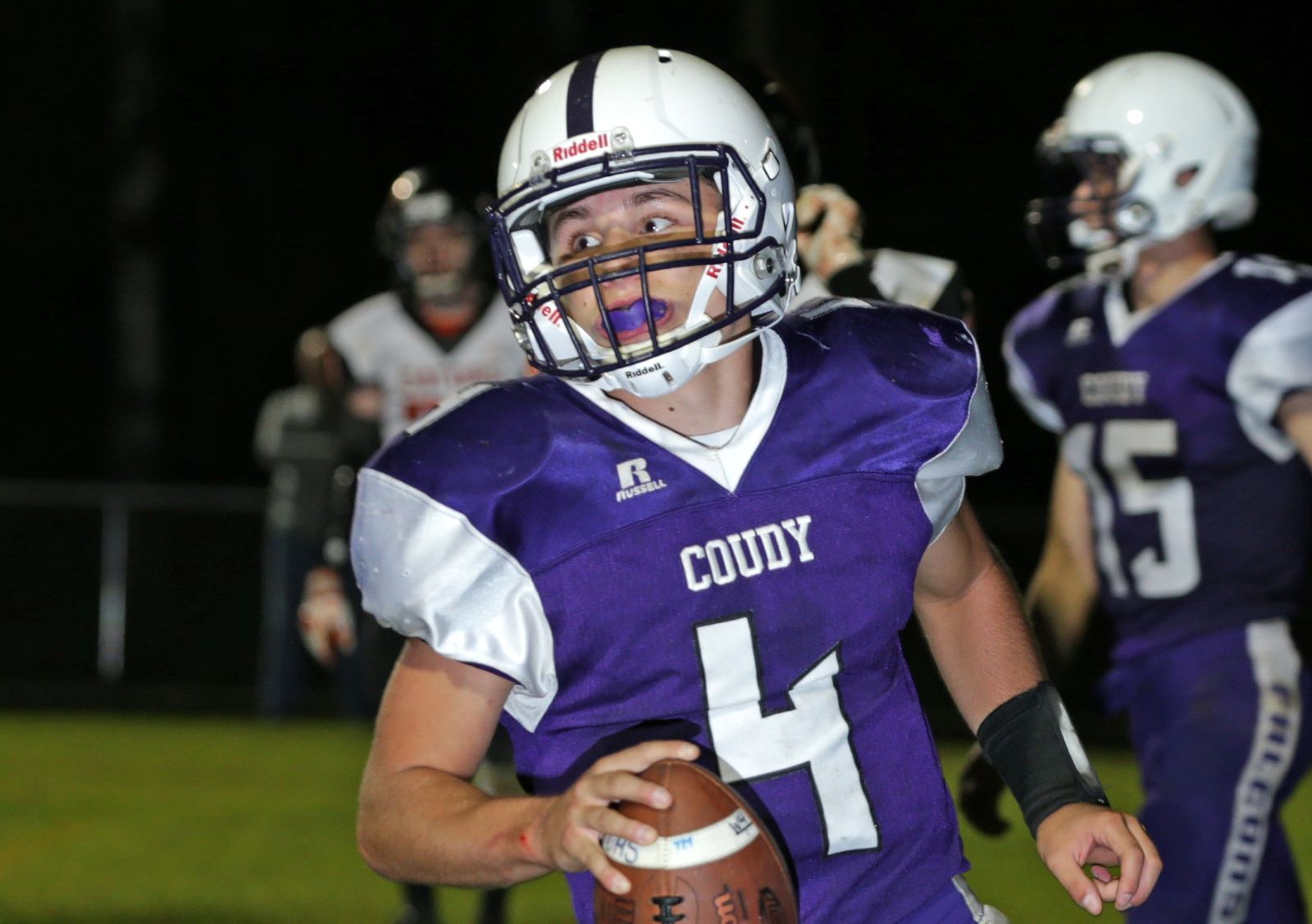 It’s Week 2 of the District 9 high school football season, but opening week for 10 teams in the district’s Intermediate Unit 9 region, or affectionately called the “Bubble” region.

Prior to the season the IU9 mandated that all of the school districts in its jurisdiction, pending individual school board approval, would only play schools in all sports within the “Bubble.” Thus, the move forced a district-wide rescheduling.

Last week was all of the Non-Bubble, or southern region teams and this week is the opening week for the Bubblers. Actually, Thursday night’s 32-6 win by Elk County Catholic over Cameron County got things started.

In the Bubble tonight, it’s Port Allegany visiting Coudersport and Smethport at Otto-Eldred in the IU9 Small School while Bradford visits St. Marys and Kane travels to Ridgway in the IU9 Large School.

South of the Bubble, it’s a big matchup at the C-L Sports Complex as Brookville visits Central Clarion County in one of the three D9 League’s South Large Division games. Also in the Large, DuBois visits Karns City and Punxsutawney hosts Moniteau.

There will be one less game in the South Small as Sheffield will forfeit to Curwensville with the Wolverines’ season likely finished. See story here.

The other games are Brockway traveling to Redbank Valley and Keystone hosting Union/A-C Valley.

Both teams are coming off wins as the Raiders topped DuBois, 42-28, and the Wildcats blew out Punxsutawney, 42-6, also at the C-L Sports Complex.

And both quarterbacks had strong games. The Raiders’ Jack Krug threw for 383 yards and four TDs while the Wildcats’ Cal German went for 308 yards and four TDs, three of those scoring strikes going to Ethan Burford who caught five passes for 193 yards.

Krug’s receiving list with catches and yards was balanced — Kyle MacBeth 7-98, Robert Keth 5-92, Brayden Kunselman 8-87 and Ryan Daisley 6-84. Krug now sits in seventh place on the all-time D9 passing yardage list with 6,376 yards, 262 yards behind No. 6 Mike DeFilippi of Smethport. His 81 TD passes rank him No. 4 and six behind No. 3 Gabe French of DuBois.

The Raiders haven’t beaten a Larry Wiser-coached team since 2011.

The Beavers head to Karns City for the first time in five years when they were routed by the Gremlins, 69-28. While the Beavers lost their opener on the road at Brookville, the Gremlins traveled to Moniteau and beat their Butler County rivals, 31-8.

Karns City scored two non-offensive touchdowns and got field goal from kicker Owen Colwell. Kaden Scherer returned a punt 60 yards for a score and fumble recovery off a bad punt snap in the end zone for a touchdown. Offensively, the Gremlins had 11 different rushers with quarterback Brayden Christie running for 34 yards on five carries while throwing for 37 yards and a TD. Eric Booher also took snaps at QB and completed 3 of 6 passes for 100 yards, completing a 60-yard TD pass to Micah Rupp. Christie also found Rupp for a TD.

and a touchdown, but was sacked five times. Zach Shilala caught seven passes for 72 yards.

The Warriors head to Jefferson County to play the Chucks as both teams try to bounce back from an opening-week loss.

The Warriors gained 206 yards offensively in their loss to Karns City with quarterback Brady Thompson completing 8 of 17 passes for 105 yards. Mason Mershimer ran for 50 yards on 14 carries.

Punxsutawney managed 219 yards in its loss to Central Clarion. Kameron Falgout ran for 105 yards on 10 carries, scoring the Chucks’ lone TD on an 83-yard run. He, Peyton Hetrick and Seth Moore combined to complete 6 of 18 passes with four interceptions.

The Dutch host the Owls in both teams’ season-opener. The Owls were 1-8 last year while the Dutch, who blanked them 45-0, finished 6-5 with a sub-regional playoff loss to Westinghouse finishing their season under new head coach Chris Dworek.

The defending Class 2A champion Elkers head into the season looking for a fifth straight district title. Head coach Mark Heindl heads into his 13th season looking to replace much of his skill position players either lost to graduation or deciding not to go out for the team this year.

Both the Falcon Knights and Panthers gun for a 2-0 start in Knox. Union/ACV will try to avenge last year’s 44-14 loss to the Panthers in a result that led to a three-way tie for the D9 League Small-South Division title with Redbank Valley.

The Falcon Knights were balanced in their 37-7 win at Brockway, limiting the Rovers to just 70 yards of offense with a minus-35 yards rushing. Quarterback Tanner Merwin ran for 72 yards and two TDs while passing for 56 yards and another TD. The Falcon Knights defense had three interceptions, one of them returned for a TD by Eli Penny.

The Bulldogs and Rovers meet in the regular season for the first time since both teams were members of the Keystone Shortway Athletic Conference way back in 1998. Since then, the Rovers have beaten the Bulldogs in playoff matchup four times, most recently in 2015. It’s the 65th meeting between former rivals.

The Bulldogs blanked Curwensville, 44-0, last week and piled up 431 yards of offense while limiting the Tide to just 61 yards passing and zero yards rushing. Quarterback Gunner Mangiantini completed 10 of 11 passes for 129 yards and four TDs while running for another. Hudson Martz and Ray Shreckengost ran for 101 and 69 yards respectively.

The Rovers were stymied by Union/A-C Valley in a 37-7 loss, their only score coming on a 80-yard kick return by Tanner Morelli in the fourth quarter. Quarterback Conner Ford completed 10 of 17 passes for 105 yards with three interceptions.

The defending Class A champion Falcons host the Gators, a team they beat 55-0 last year during an unbeaten regular season that saw them give up just four touchdowns while finishing 11-1 after a state playoff loss to Farrell.

Head coach Tom Storey’s team has senior quarterback Hayden Keck back after he threw for 805 yards and six TDs and ran for another 822 yards and 15 TDs. Brandt Kightlinger (49-368, 7 TDs) and Dylan Kelly (47-356, 4 TDs) also return. Senior Cale Ayers is the top returning tackler.

The Hubbers head to Duke Center to take on the Terrors, a team they beat 36-22 last year.

The Terrors were 3-7 last year. Senior quarterback Cole Sebastian threw for 2,366 yards and 26 TDs while running for 601 yards and 8 TDs. Senior Ethan Smith was his top target, catching 53 passes for 939 yards and 12 TDs.

Both teams won their opener, the Bison 27-0 over Penns Valley and the Golden Eagles in a 21-13 win over Bellefonte.

For the Bison, quarterback Oliver Billotte threw for 222 yards and two TDs, both of them connecting with Karson Kline while rushing for two TDs and 56 yards. Kline caught five passes for 60 yards while Jake Lezzer hauled in eight passes for 128 yards. The Bison limited the Rams to 106 yards of offense.

ECC Starts Season with 32-6 Win over Cameron County
Week 2 District 10 Football Preview: No Shortage Of Showdowns
This website or its third-party tools process personal data.In case of sale of your personal information, you may opt out by using the link Do not sell my personal information.
×
Manage consent