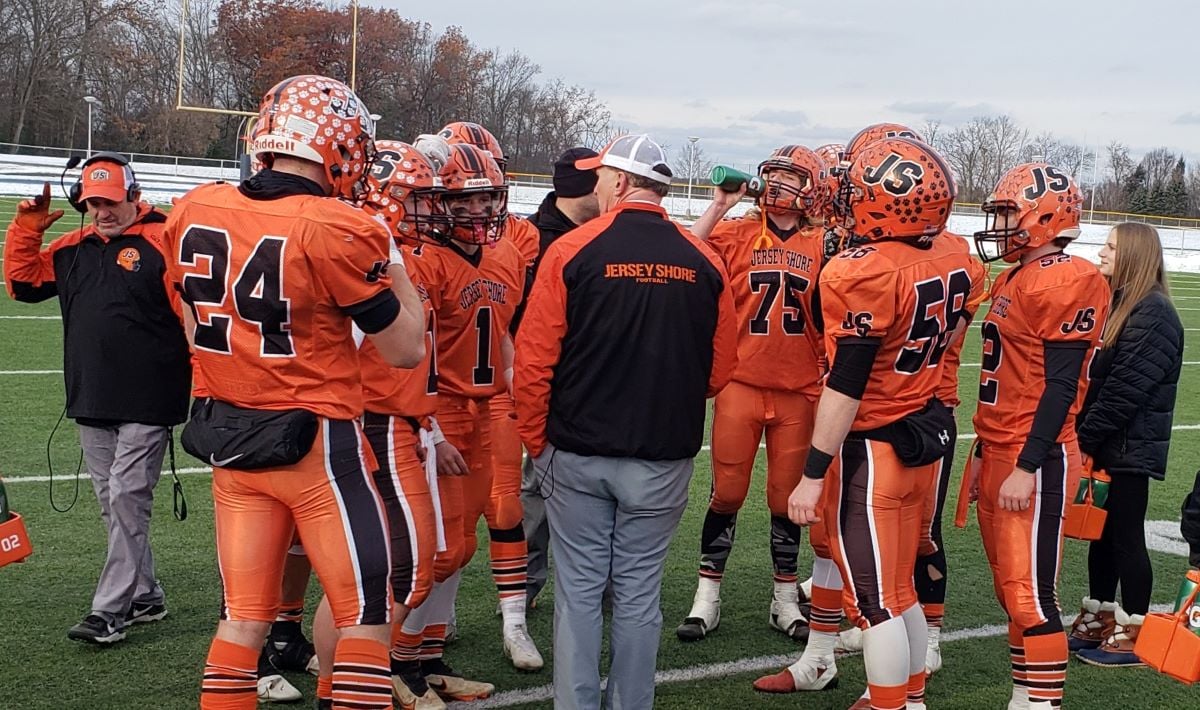 Jersey Shore huddles up during the break between the third and fourth quarters Saturday. Photo by Chris Rossetti

CLARION, Pa. – Going into its PIAA Class 4A quarterfinal contest with unbeaten Jersey Shore Saturday, Meadville football coach Ray Collins knew his team was going to have to play a clean game in order to pull the upset.

“It got away from us a little bit,” Collins said. “We made a lot of mistakes today. Jersey Shore is a good football team. We knew coming in today, we would have to play mistake-free football. Unfortunately, we weren’t able to hold up that end of it.”

But the Bulldogs in orange used big plays on both sides of the ball to make the score more lopsided than the stats would indicate.

It started with an 84-yard fumble recovery for a touchdown by Tate Sechrist after a strip-sack of Meadville quarterback Gavin Longstreth by Cooper Peacock and continued with a pair of quick-strike long touchdown passes from Brady Jordan that helped Jersey Shore take a 24-6 halftime lead.

The fumble return was an early backbreaker for the Bulldogs in white, as they had driven from their own 41 to the Jersey Shore 8 thanks in part to a couple of clutch passes from Longstreth – a 12 yarder to Khalon Simmons and a 13 yarder to Andre Jefferson and a 25-yard run on fourth-and-1 from Amarri Lewis.

But on second-and-7 from the Jersey Shore eight, Peacock came on a blitz and knocked the ball free at the 16-yard line where it was scooped up by Sechrist who went untouched to the end zone for a 7-0 Jersey Shore lead.

“It was just a simple missed assignment on the backside block,” Collins said. “I thought we really had some momentum going. We were pushing the ball down the field. The offense was clicking pretty good. I think that would have changed the dynamics of things, you know. It’s something we have been doing all year long, coming down, starting, and getting points on the board.”

It was the second missed opportunity for Meadville in the opening 13 minutes of the game.

The Bulldogs in white had a great chance to take the lead when Peacock made a rare mistake on a Meadville punt with just over seven minutes to play in the first quarter when he muffed the ball trying to play it on the bounce giving Meadville the ball at the Jersey Shore 15-yard line.

But a first down run by Simmons lost three yards before a quick pass to Griffin Buzzell and a 4-yard run by Lewis set up a fourth-and-3 from the 8-yard line.

But Simmons was tackled for a yard loss giving the ball back to Jersey Shore.

Jersey Shore has a phenomenal defense,” Collins said. It’s a bunch of really good athletes on that side of the ball and, and, you know, they, they were ready for us. If we would have been able to score, I think maybe they would have been a little bit different.”

Runs of 11 yards from Lewis and nine yards from Simmons helped set up a 16-yard Simmons touchdown run at the 8:05 mark of the second quarter that brought Meadville within a point, 7-6, after a missed extra point.

“The guys fought hard,” Collins said. “They came out and played their butts off. That bunch of guys in there have been a bunch of overachievers the entire season. They just did an exceptional job getting us here. When they got on the field, they are fighters. They put up a heck of a fight.”

The game remained a one-point contest through each of the teams’ next possessions before a couple of quick-strike touchdowns by Jersey Shore changed the entire complexion of the contest.

After forcing a Meadville punt, the Bulldogs in orange took over at their own 42-yard line with 4:54 to play in the half, and it took them just two plays to score.

On Meadville’s next drive, the Bulldogs in white were facing a fourth-and-inches at their own 31-yard line when Collins decided to punt.

But Jersey Shore made that decision look suspect when it needed just three plays to score again to go ahead 21-6 when Jordan hit Peacock with a 54-yard touchdown pass at the 1:56 mark.

Things went from bad to worse for Meadville when Hess picked off a Longstreth pass at the Meadville 42-yard line with under a minute to play leading to a 29-yard field goal from Breck Miller as time ran out in the half giving the Bulldogs in orange the 18-point halftime lead, 24-6.

The second half flew by with Meadville running 26 plays to Jersey Shore’s 23 (two were kneel-downs) but Jersey Shore getting the only touchdown of the half on a 6-yard run by Hayden Packer with just 3:29 to play.

Jersey Shore now faces Aliquippa, a 28-13 winner over Belle Vernon in the WPIAL championship game also played Saturday, at a time, date, and place to be announced.

NOTES: The game took just an hour, 48 minutes to play as the teams combined for 82 rushing plays, including 52 from Meadville.

Hoenstine Sets Passing Record as Central Tops Grove City in PIAA 3A Quarterfinals
Clarion’s Burns Named D9and10Sports.com District 9 Volleyball MVP; All-District Team Named
We use cookies on our website to give you the most relevant experience by remembering your preferences and repeat visits. By clicking “Accept All”, you consent to the use of ALL the cookies. However, you may visit "Cookie Settings" to provide a controlled consent.
Cookie SettingsAccept All
Manage consent