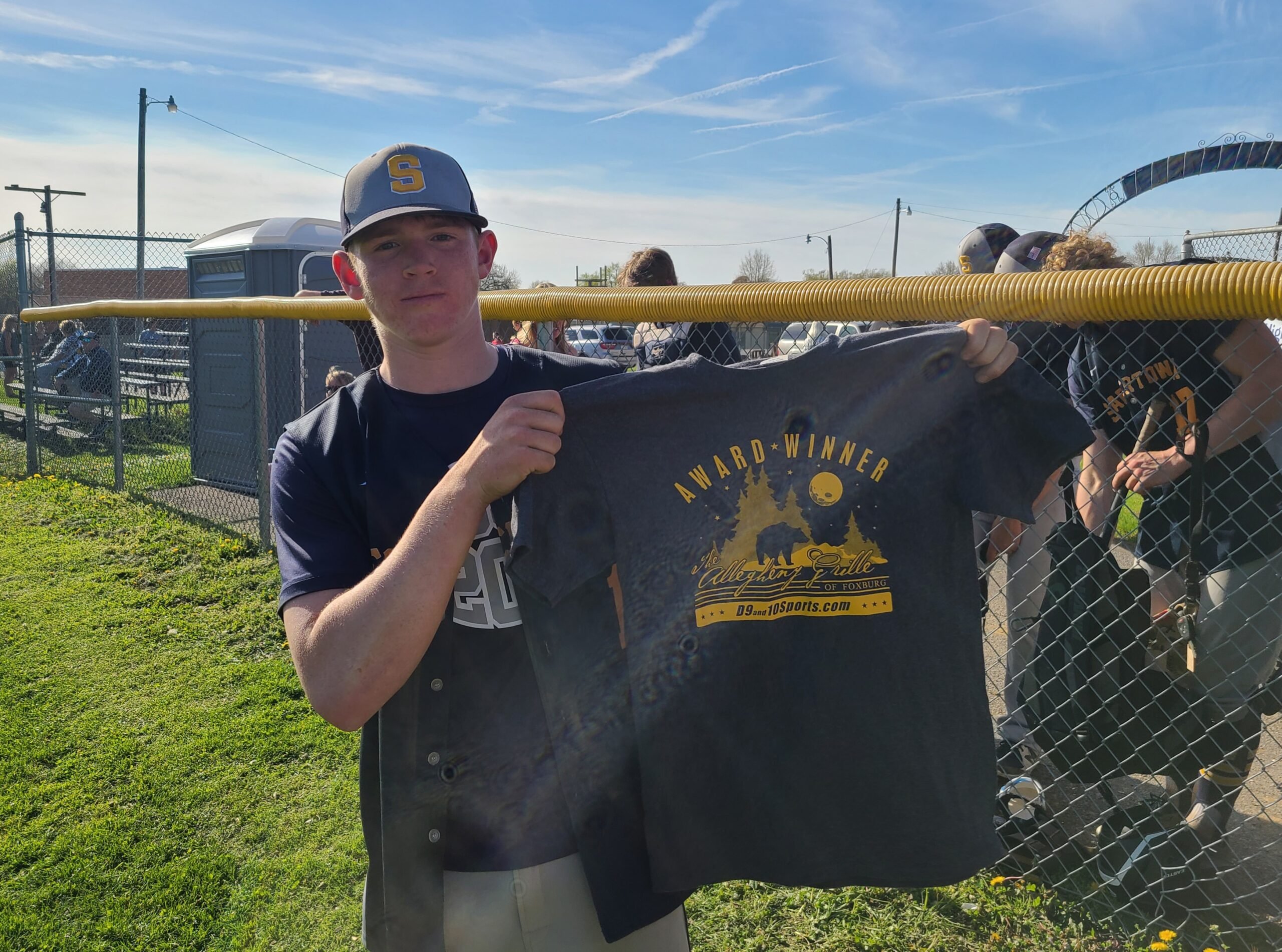 CAMBRIDGE SPRINGS, Pa. – Henry Shaffer had another dominant outing for Saegertown, firing a three-hit shutout as the Panthers earned a 5-0 win over Cambridge Springs.

Shaffer struck out 10 and walked four, throwing 63 of his 96 pitches for strikes. He was also 2-for-4 with a run scored on his way to Allegheny Grille of Foxburg Player of the Game honors.

Brock Cunningham went 2-for-2 with a walk for Cambridge Springs.

Dan Snyder got the inning started with an RBI single, followed by a Jake Hower two-run triple and capped by an RBI single off the bat of Ian Chylinski.

Hower finished with three RBIs, while Snyder had three hits and two RBIs.

Luke Costello was 2-for-3 with a double and two RBIs for the Ramblers, while Joey Spano Jr. also had two hits.

UNION CITY, Pa. – Youngsville scored in all but one inning, rolling to a 12-5 win over Union City.

The Eagles broke the game open with four runs in the seventh.

Lucks went four innings to get the win, allowing two runs on six hits, striking out four, and walking two.

Quinlan Magee was 2-for-3 with an RBI for Union City.

Aspden tossed four shutout innings to get the win. He struck out five, allowed three hits, and walked one.

The Greyhounds scored eight runs in the fifth inning en route to the win.

Garrett Heller and Ben Miller both went 2-for-3 with an RBI (Miller also scored three runs), while Cole McAllister was 3-for-4 with an RBI.

Aidan Davison took the loss, allowing four runs in one inning of work.

GREENVILLE, Pa. – Clay Wiesen and Zac Lanshcak drove in two runs each as Hickory earned a 10-5 win over Greenville.

The Hornets put up a four-spot in the first inning en route to the win.

Fazzone got the win, allowing two runs in 2 ⅔ innings.

Noah Philson was 3-for-4 with an RBI for Greenville, while Collin Wilson was 2-for-3 with two doubles and two RBIs.

Bennett Hayne took the loss, allowing four runs in ⅓ of an inning.

Thompson struck out 11 and allowed just four hits and two walks before reaching his pitch limit. Dylan Gordon tossed a scoreless seventh with two strikeouts for the save.

The Rockets scored a single run in the third inning and two in the sixth. Brett Galcik was 1-for-2 with an RBI, while Eli Drushel also knocked in a run and Ryan Montgomery was 2-for-3.

Devin Gruver had a big game for the Big Reds in the win, going 3-for-5 with a home run, two doubles, three RBIs, and two runs.

Middlesex led 12-7 going to the bottom of the seventh, but Evan Gilson was able to induce a groundout with the bases loaded to end the game.

Kyle Hurley went 2-for-3 with a home run, three RBIs, and three runs for West Middlesex, while Blaise Fox drove in two runs and Richie Preston was 2-for-4 with three runs.

Fox tossed three innings to get the win, allowing three runs and striking out six.

Thomas doubled, going 3-for-4 while also scoring three runs, while Josh Dieven drove in a pair of runs, and Brock Lenzi, Collin Trontel, and David Moyer drove in one run each.

Tyler Bachman had two hits for the Mustangs.

SUGARCREEK BOROUGH, Pa. – Isaac Clayton hit a two-run home run in the first inning and Rocky Grove never looked back in a 10-0, five-inning win over Cochranton.

Clayton went 2-for-2 with three RBIs and four runs scored for the Orioles, who scored in every inning but the second.

Reece Henderson drove in a pair of runs for the Orioles, while Aaron Burkhardt was 1-for-3 with three runs scored.

Charlie Motter, Connor Highfield, Will McMahon, and Justin Dunkle all drove in runs for the Oilers who also took advantage of eight walks and four errors by Sharon. Motter drew three of the walks, while Dylan Lockhart scored a pair of runs.

Sharon scored two runs in the second, one in the third, two in the fifth, and one in the sixth to get within one. Hayden Scarmak was 2-for-3 with two RBIs, while Cole Voytik, Dante Currie, and Jason Stanke all drove in one run each.

TITUSVILLE, Pa. – Logan Wells’ RBI double in the top of the eighth inning broke a 3-3 tie and lifted Mercyhurst Prep to a 4-3 win over Titusville.

Mike Nelligan tripled in a pair of runs for the Lakers, while Ethan Ishimaru had an RBI.

For Titusville, Kamden Mong and Tyler Abrams each had RBIs.

Ryan Gates got the win, allowing three runs (one earned) in five innings, striking out four.

Craft allowed two hits and one run, striking out three and walking two.

Ryan Welka went 1-for-2 with an RBI and four runs for the Bison, while Ethan Wilcox and Dan Caldwell had one RBI each. LeBoeuf also took advantage of 10 walks issued by Dragon pitching as well as four errors.

Ben Sowa had two hits for Warren, while Eric Dippold drove in a run.

Jensen and Brok English drove in runs for Eisenhower.

Aari Fox and Aiden Rubliotta set the tone at the top of the Fairview lineup, combining to go 5-for-9 with five RBIs and three runs, with Fox belting a pair of doubles.

Also for the Tigers, Logan Fiolek and Collin Bolla had two hits and an RBI each.

Prep’s Ng, McDowell’s Heinlein Claim D10 Tennis Titles
May 9, 2022 D9 SB: Young Pitches, Hits St. Marys Past Clearfield; OV Uses 8-Run Sixth to Get Win; Karns City Continues to Roll
This website or its third-party tools process personal data.In case of sale of your personal information, you may opt out by using the link Do not sell my personal information.
×
Manage consent