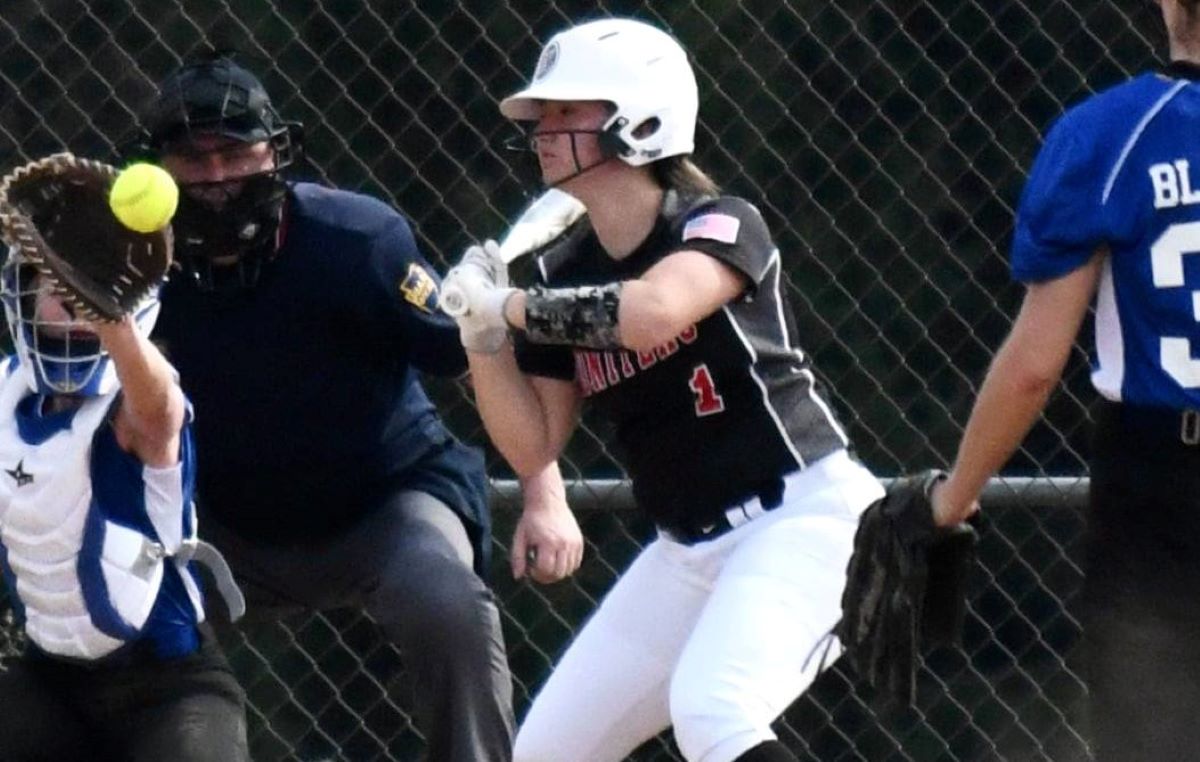 Courtney Stewart was the winning pitcher and also had a hit for Moniteau in a victory over C-L Thursday. Photo by Lori Blauser

STRATTANVILLE, Pa. – Emma Covert was 4-for-4 with three doubles and two RBIs to lead visiting Moniteau past Clarion-Limestone, 6-3.

Taylor Shultz chipped in offensively for the Lady Warriors going 3-for-4 with two RBIs, Abby Rottman was 2-for-4 with a pair of doubles, and Rylee Hoffman was 1-for-2 with a double and two RBIs.

Kendall Dunn was 2-for-4 with a double for C-L with Alyssa Wiant going 1-for-2 with a walk and an RBI.

SENECA, Pa. – A strong outing in the circle by Alaina Hogue helped Cranberry to a 5-2 win over visiting Redbank Valley.

Hogue gave up two earned runs, both in the first inning, on five hits and two walks while striking out six.

She helped herself by going 2-for-2 at the plate with a home run, a run scored, and two RBIs.

KARNS CITY, Pa. – Getting two home runs from Jess Dunn and Marra Patton, Karns City scored in all but one inning in a 12-2 five-inning win over visiting Brookville.

Patton hit a two-run homer in the first and Dunn ripped a solo in the fourth. Dunn and Garrah Milochik each had two hits, both doubling and scoring two runs.

Megan Whitmire and Allison Walker combined to throw a five-hitter with Whitmire starting and going 2 1/3 innings before Walker finished things out with the final 2 2/3 scoreless innings to get the win, allowing one hit with two strikeouts and a walk.

Audrey Sorek pitched for Brookville, giving up 11 hits while walking four and striking out one.

KNOX, Pa. – Freshmen Bella Black and Emma Gruber both went 3-for-3 and Natalie Bowser hit a three-run home run to lead Keystone to a 10-0, five-inning win over visiting Forest Area.

Black had a pair of doubles and scored twice, while Gruber had a triple and drove in two. Bowser was 1-for-3 with the three RBIs and a run scored.

Emma McFarland was 2-for-3 for Forest Area.

Exley got the win going four innings allowing three hits and two walks while striking out eight. Bowser pitched a scoreless inning striking out one.

CLARION, Pa. – Payton Simko drove in five runs while going 2-for-3 with a home run, a double, and two runs scored to help Clarion roll past visiting Union, 16-1, in three innings.

Ava Schreckengost had a triple for Union, while Rylie Colligan went 1-for-2 with a run scored, and Morgan Cumberland walked twice and had an RBI.

Also for the Green Wave, Jadyn Brabham went 1-for-2 with a double, a walk, an RBI, and two runs scored.

West threw a three-inning no-hitter to get the win. She walked one and struck out seven.

The Lady Bison took a 2-0 lead in the third and tacked on a run in the fourth before the Lady Raiders scored twice in the bottom of the fourth to get back in the game and then took the lead with the four-run fifth.

Lauren Ressler had a big day at the plate for Clearfield going 3-for-4 with three doubles, a run scored, and two RBIs. Ruby Singleton was 2-for-4 for the Lady Bison, while Alaina Fedder was 2-for-3 with a double and a run scored.

Emma Hipps suffered the loss giving up seven runs, five earned, on 12 hits and a walk while striking out six in six innings.

May 6, 2021 D10 Baseball: Cambridge Springs Powers Past Union City; Prep Edges McDowell
May 6, 2021 D9 Baseball: Smethport’s Ognen, DuBois’ Starr Throw No-Hitters; Johnsonburg, St. Marys Advance to Elk Co. To. Title Game
We use cookies on our website to give you the most relevant experience by remembering your preferences and repeat visits. By clicking “Accept All”, you consent to the use of ALL the cookies. However, you may visit "Cookie Settings" to provide a controlled consent.
Cookie SettingsAccept All
Manage consent