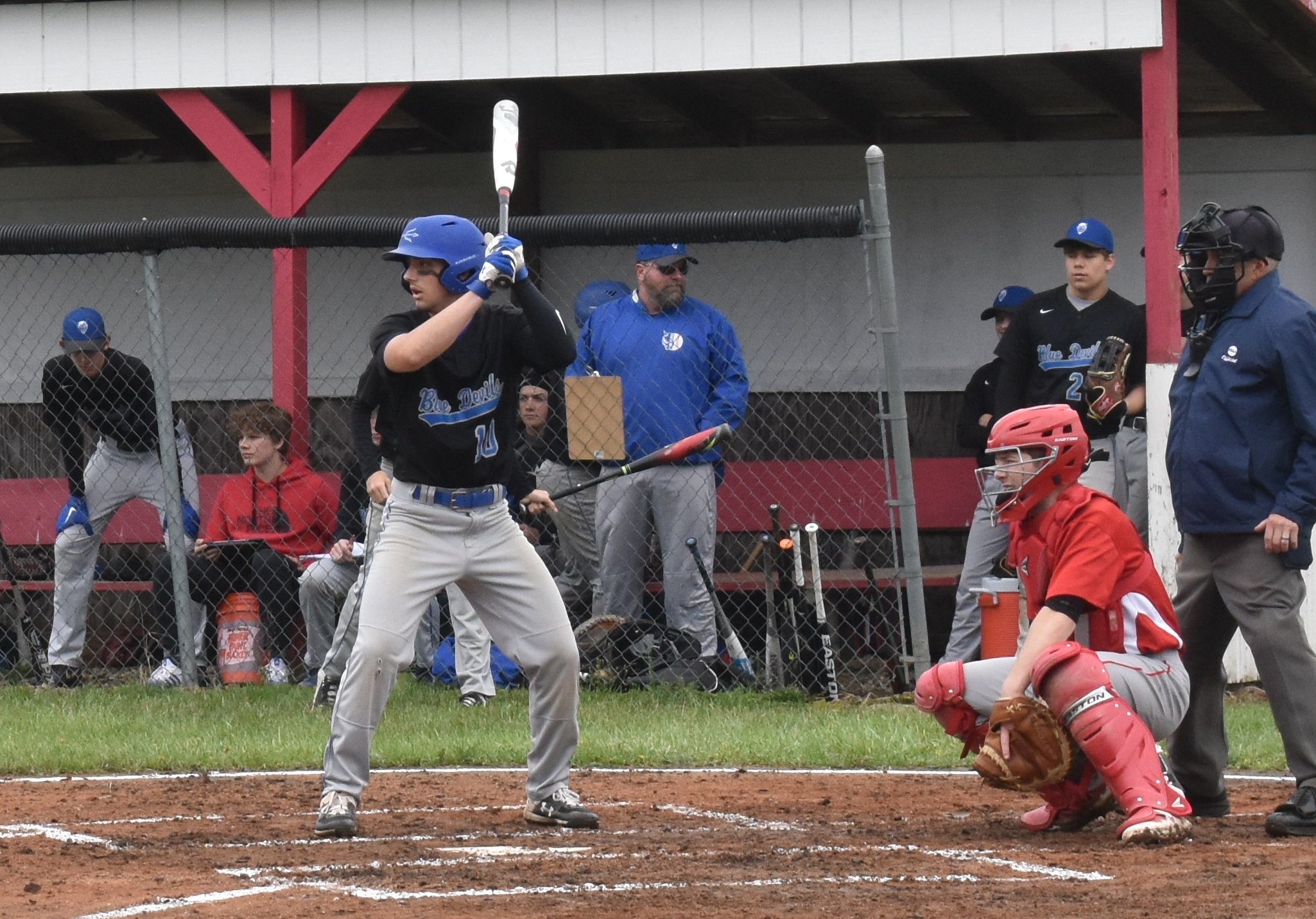 YOUNGSVILLE, Pa. – Nursing a three-run lead, Cambridge Springs found itself in some potential trouble after Youngsville loaded the bases with no outs in the bottom of the sixth.

Enter Brady Jardina, who came on in relief and slammed the door with three consecutive strikeouts. The Blue Devils followed that up with a seven-run seventh inning in a 12-2 win over the Eagles on Wednesday.

It was part of a big game for Jardina, who also went 2-for-3 with a double, RBI, and two runs scored. He talked about the win afterward:

After Jardina scored on a wild pitch in the first, the Blue Devils went up 4-0 with three runs in the third as Jardina drew a bases-loaded walk and Preston Gorton followed with an RBI fielder’s choice.

Matt DeSimone cut the lead in half in the third on a two-run triple for Youngsville. DeSimone attempted to score on the play but was ruled out on a play at the plate.

Mazzadra and Gorton drove in two runs each for Cambridge Springs, while Johnson went 2-for-3 with a run scored for the Eagles.

YOUNGSVILLE, Pa. – Nate Lucks had a big game on the mound at the plate as Youngsville earned an 8-3 win over Maplewood

Youngsville scored four runs in the first inning, with Lucks going 4-for-4 at the plate with two doubles, three RBIs, and two runs.

The Eagles had 13 hits, as Matt DeSimone also went 3-for-3 with an RBI and two runs, while Keegan Mesel was 2-for-4 with a run and Wyatt Dalrymple was 2-for-3 with two RBIs.

Walker struck out nine and allowed just one walk, throwing 66 of his 89 pitches for strikes.

The Bulldogs jumped out to a 3-0 lead in the first inning and made it 5-0 in the third. Brighton Anderson and Brady Miller drove in two runs each for the Bulldogs, while Rocco Tartaglione was 3-for-3 with a run scored.

Mark Cattron had an RBI for Sharon.

Kamden Martin, John Hake, and Luke Tubbs all had big games in the middle of the Grove City order. Martin was 3-for-4 with two runs, while Hake was 2-for-3 with two runs and an RBI and Tubbs was 2-for-2 with two doubles, three RBIs, and four runs.

Coldan Barr was also 2-for-3 with two RBIs and a triple and Landon Haggart drove in a pair of runs.

Noah Philson, Nick Solderich, and Soren Hedderick all had two hits and an RBI apiece for Greenville.

JAMESTOWN, Pa. – Wilmington had 11 hits and took advantage of 10 Jamestown walks in a 19-1, three-inning win over the Muskies.

Dom Serafino was 2-for-3 with three RBIs for Wilmington, while Garrett Heller, Landon Duzyk, Tyler Mikulin, Isaac Schleich and Shane Book all drove in two runs apiece for the Greyhounds.

Rocky Serafino got the win, allowing one run in three innings, striking out six.

HERMITAGE, Pa. – West Middlesex scored seven runs in the second inning on its way to a 13-2 win over Kennedy Catholic.

Richie Preston belted a two-run home run for the Big Reds, while Blaise Fox was 2-for-3 with three RBIs, Devin Gruver 2-for-4 with two runs, and Eric Nehlen had two doubles.

Fox got the win, allowing one run in five innings on five hits, striking out three, and walking two.

Stargell Fuhr was 2-for-3 with a double and an RBI for Kennedy Catholic, while Dom Rapp and Cord Pocza had two hits apiece.

Shillito struck out five without issuing a walk.

Lakeview scored seven runs in the first inning as Garrett Harbaugh was 2-for-3 with a double and three RBIs, while Owen Dye and Cody Fagley drove in two runs apiece.

Cameron Buckley took the loss for Reynolds, allowing five runs in ⅓ of an inning.

ERIE, Pa. – McDowell rallied from a 4-0 deficit, scoring five runs in the fifth inning and four more in the sixth in a 9-4 win over Corry.

Nick Hamilton belted a two-run home run for the Trojans, while Jake Hower and Dan Snyder drove in two runs each.

Snyder got the win, allowing one run in four innings, allowing three hits, and striking out six.

John Albers took the loss, allowing five runs in one inning of work.

Six other Panthers had an RBI in the win. Dylan Flinchbaugh and Henry Shaffer had two hits each, while Shaffer scored three runs.

Cameron Jakubczak had a single for Eisenhower.