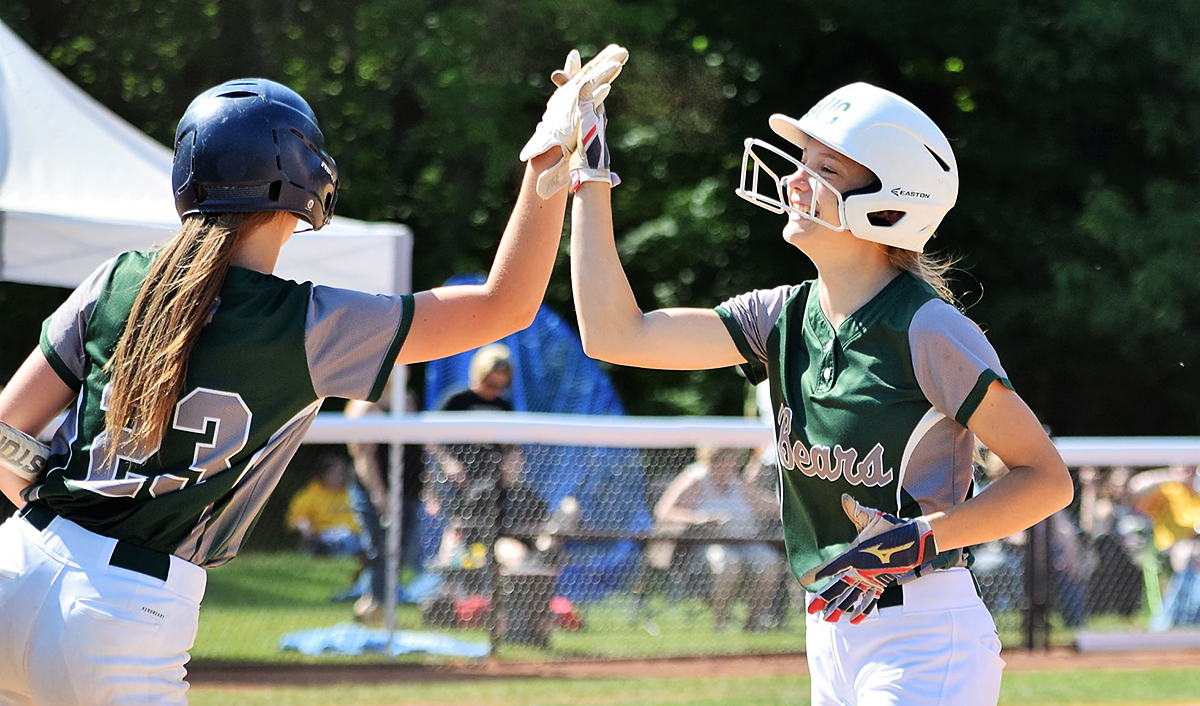 UNION CITY 9, REYNOLDS 2
ERIE – Union City’s dominant 2021 season continued in the District 10 Class 2A semifinals when the Bears picked up a 9-2 win over Reynolds.

The win improved Union City’s record to 19-0, with 16 of those wins by five or more runs.

Reynolds opened the scoring in the second as Mackenzie Herman roped a leadoff double into left. She went to third on Aandrea Hillyer’s ground out, then scored when Phoenix Collins singled to left to put the Raiders ahead, 1-0.

The lead was short-lived as Union City answered in the bottom of the inning. Rienna Higley hit a double to start the frame and moved to third when Michayla Megee grounded to first for the second out of the inning. Kamryn Bowersox followed with a double to center to tie it at 1-1.

The Bears took advantage of an error in the third to plate two more. Sydney Gilbert singled with two outs, then Cyaira Zielinski reached on an error. Gilbert went to third on that play, then scored as the throw into second was errant as well. Zielinski came home on a passed ball to make it 3-1.

Higley and Jordan Brozell followed with singles, but Halyn Cawthorne got Megee to popout to end the threat.

The Raiders got one back in the sixth when Cawthorne hit a sac fly to right that scored Lea Miller.

Gilbert had three hits and three RBI, while Zielinski drove in a pair and Eliza Reynolds scored twice and had two hits.

Abby Tingley allowed two earned runs on four hits with a walk and five strikeouts in the win.

Union City will try to stay undefeated and bring home a D10 title when the Bears take on Sharpsville Monday at a time and location TBD.

SHARPSVILLE 13, SENECA 1
MEADVILLE, Pa. – Breanna Hanley’s seventh-inning grand slam gave Sharpsville its third, 4-run inning of the game and the Blue Devils advanced to the District 10 Class 2A championship with a 13-1 win over Seneca.

Hanley was one of two Blue Devils to homer in the game, Ericka Grandy hit a 3-run bomb in the fourth inning, and both finished the game with four RBI. Hanley was dominant in the circle as well as she allowed just one run, unearned, on four hits with a walk and 14 strikeouts.

Sharpsville had four hits, a walk and a hit-by-pitch in the first inning to open a 4-0 lead. Seneca had a chance to answer in the bottom of the inning when the first two batters reached on errors, but Hanley was able to escape the jam by striking out the side.

The Blue Devils tacked on another run in the third on a sac fly, before the offense struck for another 4-spot in the fourth.

The first two batters reached on errors, then Grandy stepped in and smashed a ball over the centerfield fence for an 8-0 lead. Two more errors and a single put the fourth run of the inning across.

The Bobcats got one back in the fifth. Ashley Post singled to start the inning, stole second and went to third when Aubrey Hammill reached on a dropped third strike. Post came in on a passed ball, but Hammill was caught trying to get to third to end the inning.

A walk, a single and an error set the stage for Hanley who took the first pitch she saw out to center for a grand slam and the final runs of the game.

Post had two of Seneca’s four hits and scored the only run. She gave up 13 runs, eight earned, on 10 hits with three walks and three strikeouts.

Sharpsville will take on Union City Monday for the D10 title.

SAEGERTOWN 13, WEST MIDDLESEX 5
MEADVILLE, Pa. – Saegertown scored in each of the first five innings on its way to a 13-5 over West Middlesex in their District 10 Class 1A semifinal.

The Big Reds scored five in the first but couldn’t get another across the rest of the way as the Panthers’ offense stacked up a dozen hits. Saegertown also took advantage of seven West Middlesex errors in the game.

A pair of singles in the first put runners on first and second with one out for Mikaila Obenrader. Her single brought in Alyssa Arblaster for the first run of the inning. Brittany Houck reached on an error to load the bases, and Abigail Kirdahy drew a walk to bring in Rhiannon Paris. Katherine Diesing followed with a sac fly to left that brought in Ava Jones and put the Panthers up, 3-0.

The Big Reds answered in a big way in the bottom of the inning. Three walks loaded the bases with one away and two runs came in when Emily Dick reached on an error. Emily Schlegel followed with a triple to plate two more, then she came in on an error to put West Middlesex on top, 5-3.

Saegertown responded with a 4-run second. Kacie Mook reached on an error and Arblaster singled to send Mook to third. Mook stole home, then Arblaster came in on an error as she stole third. Paris singled, then Obenrader tripled to make it 6-5 Saegertown. Houck hit a sac fly to left to bring in Obenrader and give the Panthers a 7-5 lead.

In the third, Kylie Thompson reached on an error with one out, then Mook doubled to put runners on second and third. One out later, Kylie Stafford singled in Thompson. Mook stole home to put the Panthers ahead, 10-5.

A single and consecutive walks loaded the bases for Mook who popped a single to left to bring in a run. Thompson scored on Arblaster’s ground out to extend Saegertown’s lead to 12-5 after 3 1/2.

The Panthers added another in the fifth when Kirdahy singled in Jones.

Obenrader was 3-3 with a triple and two RBI. In the circle, she allowed five runs, four earned, on three hits with seven walks and 14 strikeouts.

Arblaster, Kirdahy and Mook each had two hits with Arblaster and Mook with two runs scored and an RBI each. Jones scored three times, while Paris crossed the plate twice.

Saegertown will take on Cambridge Springs for the D10 1A title on Monday.

CAMBRIDGE SPRINGS 6, COCHRANTON 3, 8 INNINGS
MEADVILLE, Pa. – It took extra innings, but a 3-run eighth propelled Cambridge Springs to a 6-3 win over Cochranton and a spot in the District 10 Class 1A Championship game.

The Blue Devils took a 3-2 lead after the fifth, but the Cardinals came back to tie it in the seventh thanks to a Kaylin Rose leadoff home run.

Chloe Schultz led off the eighth with a homer and, two outs later, Cheyenne Mosconi singled. Paige Verbanac reached on an error that put runners on the corners. Kylee Miller followed with a triple to put Cambridge in front 6-3.

Hailee Rodgers set down the Cardinals in order in the bottom of the inning for the win.

Taylor Smith singled to start the Cambridge second. Rodgers hit a grounder to second, but Smith was able to beat the throw to put runners on first and second. Schultz followed with an RBI single to plate Smith. One out later, Kenzie Lewis singled to center to bring in courtesy runner Abby Goetz and put the Blue Devils ahead, 2-0.

The Blue Devils retook the lead in the fifth. Miller hit a 1-out single and Aly Acosta-Reyes reached on an error. Smith singled to left to score Miller and put Cambridge Springs up 3-2.

Rose had three hits and scored twice for Cochranton. Lippert had a pair of hits. Taytum Jackson allowed six runs, three earned, on 11 hits. She didn’t walk a batter and struck out three.

Verbanac, Miller, Smith, Schultz and Lewis all had two hits for the Blue Devils. Schultz drove in a pair.

MCDOWELL 13, ALLDERDICE 3, 5 INNINGS
ERIE – McDowell staked a big early lead and never looked back in a 13-3, five inning win over Allderdice in the District 8-10 Class 6A Subregional.

McDowell scored six runs before recording its first out of the game. Hilary Sissem and Taytum Iavarone hit back-to-back singles to start, then Lexxie Biel walked to load the bases. Hannah Powierza followed with a triple to make it 3-0. Maggie Hoover and Alivia Soule walked to reload the bases. Powierza scored on a wild pitch before Ally Leonard smacked a 2-run double to right. After Leonard moved to third on a passed ball, Katie Enzbrenner hit a sac fly to center to give the Trojans a 7-0 lead.

The Trojans added three more in the third. Hoover singled and Soule walked to start the inning. Three passed balls allowed both runners to come in. Two outs later, Alyssa Draghi reached on an error and Sissem lined a triple into left to make it 10-0.

Biel and Powierza doubled and tripled to start the fourth. Hoover’s ground out brought in Powierza to make it 12-0.

Allderdice kept the game alive in the top of the fifth. Three consecutive 1-out walks loaded the bases, and Brenna Altman’s single to center brought in a pair. One out later, Ruby Ana Ashman walked to reload the bases and Isabella DiPietro-Harvey scored on a passed ball to cut the deficit to 12-3.

Draghi drew a leadoff walk in the bottom of the inning, and Sissem followed with a single. Draghi was forced out at third on Iavarone’s grounder to short. But Biel followed with an RBI single to end the game.

McDowell will play the District 6 champion Tuesday, June 1 at 4 p.m. at Mt. Aloysius.