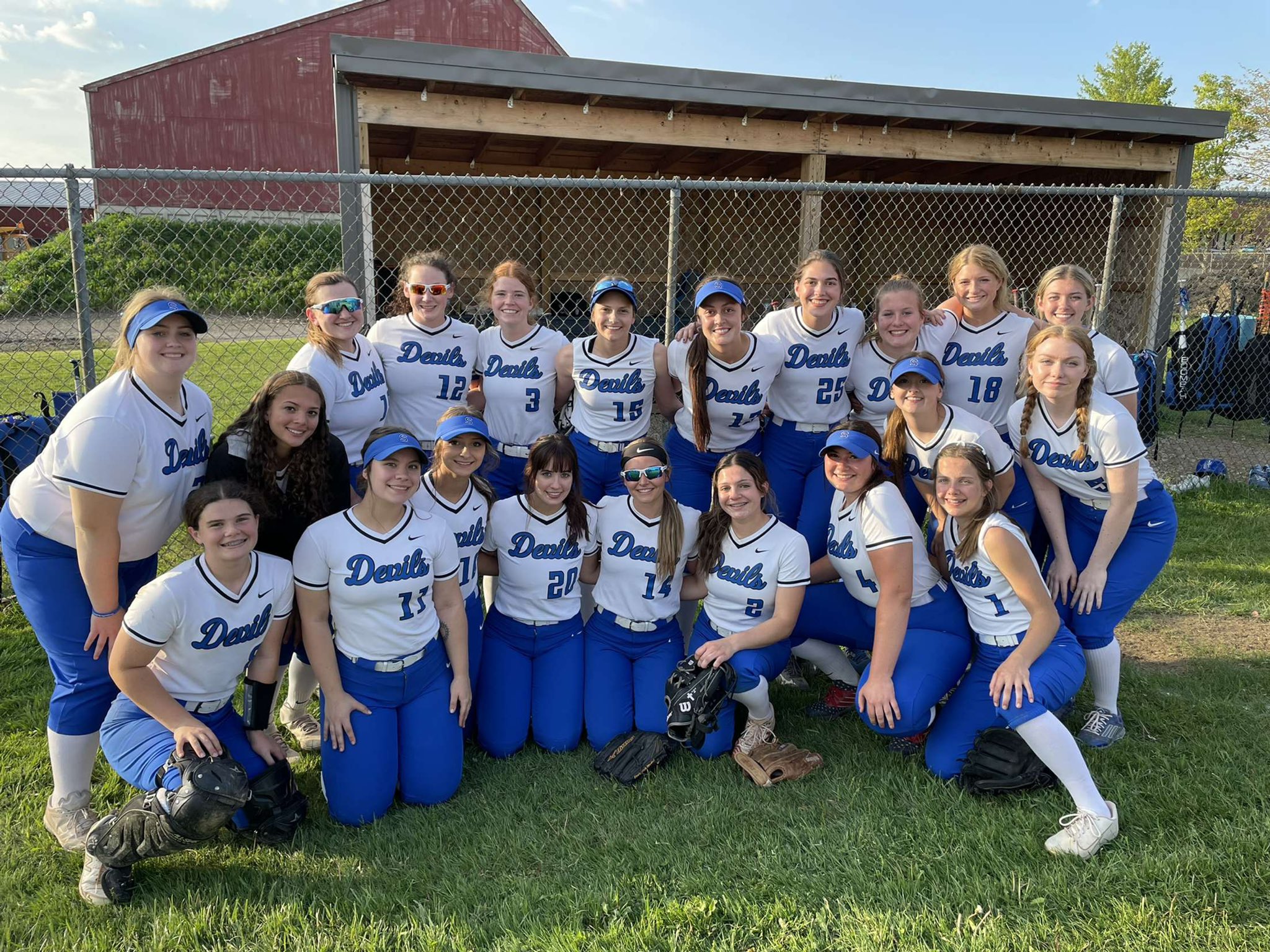 TRANSFER, Pa. – Sharpsville scored all five of its runs in the first inning on four home runs, wrapping up the Region 1 title with a 5-4 win over Reynolds.

Breanna Hanley belted a two-run shot to get it going, scoring Lily Palko, who singled, followed by solo blasts in the inning from Paige Yarian, Izzy Candioti, and Keely Whitaker.

Hanley made those five runs stand up in getting the win, but not without a rally from Reynolds, which scored two runs in the sixth on Phoneix Collins’ two-run double.

Hanley slammed the door from there, however. She allowed one earned run in her seven innings, scattering eight hits, striking out five, and walking two.

Chloe McLaughlin was 4-for-4 with two runs scored for Reynolds, while Rylie Gearhart was 2-for-4 with an RBI, and Collins finished with three RBIs.

LINESVILLE, Pa. – This time, it was Conneaut’s turn to walk off against Warren.

After Warren’s Alana Stuart won the first meeting between the teams with a walk-off homer, Brooke Wise delivered the game-ender for the Eagles this time around, with her RBI single bringing in Kaley Cook with the game-winning run.

Julianna Jacobs got the scoring starting with a solo home run to lead things off in the bottom of the first for CASH, but Warren responded with two runs in the second on Katie Madigan’s two-run single that brought in Kylie Fehlman and Ellee Irwin.

Wise tied the game in the bottom of the sixth with an RBI single.

Stuart took the loss, allowing three runs on 10 hits in 7 ⅔ innings, striking out five and walking one.

CAMBRIDGE SPRINGS, Pa. – Mikaila Obenrader and Brittany Houck both homered and combined on a one-hitter as Saegertown blanked Cambridge Springs, 13-0 in five innings.

Obenrader went four innings and gave up one hit, striking out eight, while Houck tossed a scoreless frame with two strikeouts.

The Panthers scored four runs in the first inning and five more in the third. Houck and Rhiannon Paris drove in three runs each, while Obenrader had two RBIs, Rylie Braymer was 2-for-2 with four runs, and Kylie Thompson was 2-for-3 with a run and an RBI.

JAMESTOWN, Pa. – Josie Pfaff homered and was 2-for-3 with four RBIs as Jamestown blanked Slippery Rock, 12-0 in five innings.

Miranda Biles allowed just one hit in five innings, striking out 11 and walking one.

GROVE CITY, Pa. – Alli Goodwill and Lexi Frisina both homered to send Corry to a 12-6 win over Grove City.

Goodwill finished with three RBIs and Payton McCray two, while Kendyll Chamberlin was 2-for-3 with two runs and an RBI Kiran Bugbee and Hannah Dyne had two hits each.

Dyne got the win, allowing six runs in seven innings on nine hits, striking out five.

For Grove City, Rylie Eaton homered and drove in three runs, while Logan Jones was 3-for-4 with three RBIs, Courtney Saylor 2-for-4 with a run, and Morgan Eaton 2-for-4.

The Cardinals scored 10 runs in the third inning.

Jaylin McGill also homered for Cochranton, while Heim was 4-for-4 and Taytum Jackson 2-for-2 with two runs.

Wanger struck out 13 and walked one.

Annabella Cipalla was 2-for-3 with two doubles and two RBIs for the Victors, while Emalie Thomas was 2-for-2 with a double and an RBI.

CONNEAUT, OHIO – Sharpsville scored four runs each in both the first and second innings on its way to an 11-3 win over Conneaut (Ohio), wrapping up the Region title in the process.

Tarnoci fired three scoreless innings to get the win, striking out six and allowing three hits.

FRANKLIN, Pa. – Slippery Rock scored all seven of its runs in the first three innings and Jack Grupp tossed five strong innings in a 7-1 win over Franklin.

Grupp allowed just one run on four hits in his five innings of work, striking out two and walking two.

Brett Galcik had a strong day for the Rockets, going 2-for-4 with a double and three RBIs, while Ethan Drushel and Ryna Montgomery also drove in a run each.

Aidan McCracken was 1-for-3 with a double and RBI for the Knights.

CAMBRIDGE SPRINGS, Pa. – Cambridge Springs scored four runs in the first inning and never looked back in a 10-0, five-inning win over Youngsville.

Bryce Kania and Brock Cunningham each went 2-for-3 with two RBIs for the Blue Devils, while Nathan Held doubled and drove in a pair, and Peyton Gorton scored two runs.

In the third for Grove City, Kamden Martin hit an RBI single, Luke Tubbs had a sacrifice fly and Andrew Swartfager had a two-run triple.

Michael Earman went 3-for-3 with an RBI for the Eagles, while Martin, Swartfager, and Coldan Barr had two hits each.

Titusville scored its runs via a Hunter Thomas two-run homer in the fourth.

ALBION, Pa. – Girard scored 10 runs in the first inning on its way to a 15-0, four-inning triumph over Northwestern.

Luke Bolte suffered the loss, allowing six runs (all unearned) in ⅔ of an inning.

HARBORCREEK, Pa. – Reid Courtwright hit a solo home run and Jacob Babo had an RBI single in the second inning, giving North East a lead they wouldn’t relinquish in a 4-2 triumph over Harbor Creek.

The Pickers led 2-1 going into the seventh, talking on two more runs on RBI singles from Caleb Trania and Anthony Rizzo.

Aden Bulger pitched four strong innings to get the win, allowing just one run on one hit, striking out five.

Preston Lanagan had the lone RBI for the Huskies.

ERIE, Pa. – Ryan Gates doubled and drove in three runs, helping Mercyhurst Prep to a 10-5 win over Meadville, securing win No. 300 for coach Randy Durkoske in the process.

The Lakers broke the game open with seven runs in the fourth inning.

Offensively for Mercyhurst Prep, Gates finished with three hits, while John Manendo was 2-for-4 with three runs and an RBI, Mike Nelligan 1-for-3 with two RBIs, and Clay Wotjecki 2-for-3 with a run.

HERMITAGE, Pa. – Davey Cochenour hit a ball and reached on an error in the eighth inning, scoring Remington Hart to lift Kennedy Catholic to a 10-9 win over Sharon.

Sharon had tied the game at 9-9 in the seventh on Dante Currie’s one-out RBI single.

Riley Mastkowski went 1-for-4 with three RBIs for Kennedy, while Cochenour finished with two RBIs and hart was 2-for-3 with four runs scored.

Cochenour also got the win, allowing one run in four innings, scattering six hits, and striking out one.

Santino Piccirilli had a big day for Sharon, going 3-for-4 with a home run and five RBIs, while Currie was 3-for-4 and Peyton Koss and Mikey Rodriques had two hits each.

PAINT TWP., Pa. – General McLane scored five runs in the top of the eighth to beat Clarion, 15-10, in eight innings at the Clarion County Park.

Clarion had tied the game at 10 with a run in the bottom of the seventh when Cam Lapinto’s two-out single scored Derek Smail.

But in the eighth, a bases-loaded walk to Tyler Banks broke the tie, a two-out error allowed another run to score, and Ross Morrow blasted a three-run home run.

It was Morrow’s second home run of the game, as he went 2-for-4 with a walk, two runs scored, and six RBIs.

Jarod Peyton was also 2-for-4 with a walk, a run scored, and two RBIs for the Lancers with Ryan Fiscus and Nate Dout each scoring twice. Dout had a double.

Clarion had five doubles in the game getting one each from Daunte Girvan, Noah Harrison, Lapinto, Dawson Smail, and Derek Smail.

Caden Brumigan got the win going 1 ⅓ innings allowing a hit and a walk.

Derek Smail took the loss going one innings allowing five unearned runs on two hits and two walks. He struck out one.

ST. MARYS, Pa. – Carter Redmond struck out Giovani Elinsky with the bases loaded and two outs in the top of the seventh inning, as
St. Marys held on to beat visiting Warren, 8-7.

The Dutch led 8-3 going to the seventh but a catcher’s inference call with one out in the seventh opened the door for the Dragons.

Anthony Errett cut the deficit to four, 8-4, with a single, and Owen Blum made it 8-5 with another single before a two-out error on left fielder Alex Vollmer on a ball hit by Carson Farr allowed two more runs o score.

After Konner Hoffman walked, St. Marys made the pitching change to Redmond, who needed just three pitches to secure the victory.

Christian Coudriet got the win going 5 ⅔ innings allowing five runs, two earned, on four hits, a walk, and a hit batter while striking out 12.

Tanner Shrefler went one inning giving up two earned runs on a hit and three walks, Mosier walked two batters, and Redmond got the only guy he faced for the save.

May 19, 2022 D9 Baseball/Softball: Young Outduels Toven as St. Marys SB Tops Punxsy; Smethport Out Hits Coudy in Baseball
2022 District 10 Baseball Playoff Brackets Released Powered by North Washington Rodeo
This website or its third-party tools process personal data.In case of sale of your personal information, you may opt out by using the link Do not sell my personal information.
×
Manage consent