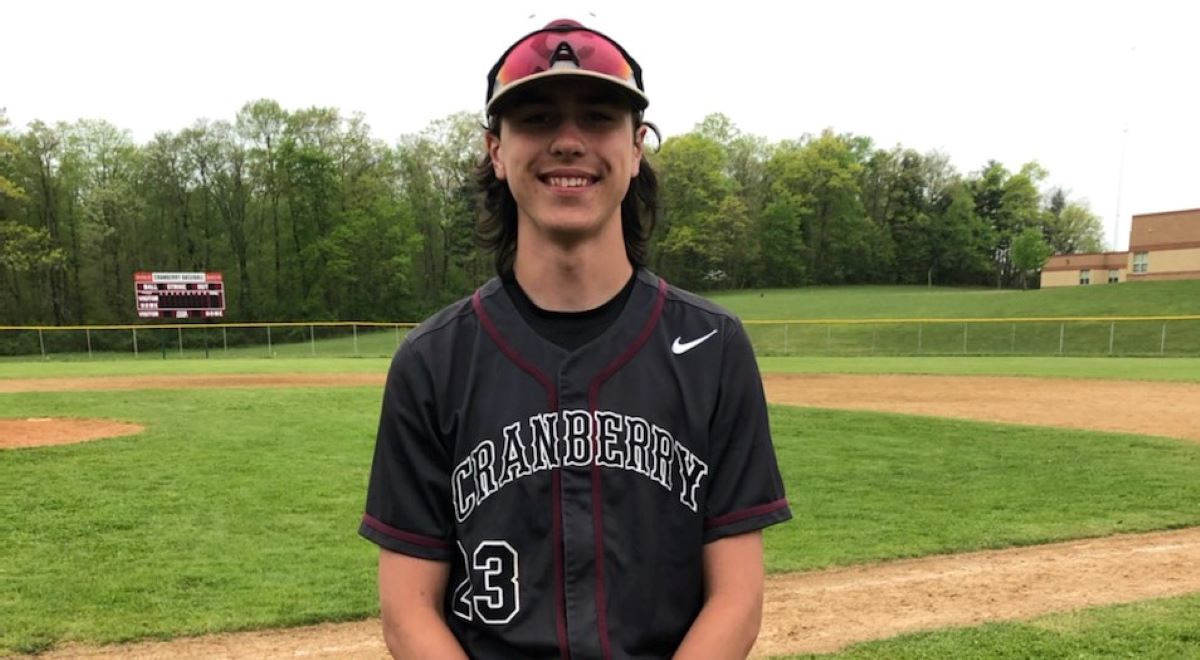 Ken Lavrich of Cranberry hit two home runs in a game for the second time this season Wednesday in a win over North Clarion. Submitted photo

SENECA, Pa. – For the second time this season, Ken Lavrich launched a pair of home runs in a game, as Cranberry beat visiting North Clarion, 12-2.

Lavrich was 3-for-3 with two walks, two runs scored, and four RBIs.

Austin Shoup also went 2-for-4 with a double, a run scored, and two RBIs for the Berries with Preston Forrest going 2-for-5 with an RBI, and two runs scored.

Shoup got the win going seven innings allowing two earned runs on five hits and three walks while striking out 11.

HYDE, Pa. – Kyle Elesnky’s two-out single to right with two outs in the bottom of the ninth scored Elijiah Quick from second, as Clearfield walked off rival Curwensville, 5-4, in come-from-behind fashion.

The Bison trailed by two, 4-2, going to the bottom of the seventh but tied the game on a Ryan Gearhart sac fly after Morgan Billotte’s triple had brought his team within one.

Then in the ninth, Quick walked with one out and went to second on a two-out walk to Hunter Rumsky before Elensky put the first pitch he saw into right field to win the game.

Shane Sunderlin went 2-for-5 with a pair of doubles, an RBI, and two runs scored for Curwensville with Thad Butler going 2-for-4 with two RBIs, Spencer Hoover 2-for-4 with an RBI, and Chris Fegert 2-for-4.

Elensky got the win in relief of Gearhart going 6 ⅔ scoreless innings allowing four hits while striking out five. Gearhart gave up four earned runs on six hits in 2 ⅓ innings of work.

David Anderson was also 2-for-3 with a walk, a run scored, and an RBI for the Crusaders with Joe Tettis going 2-for-4 with two runs scored. Ryan Shaffer walked twice and scored twice, and Tommy Slay walked three times, scored a run, and had an RBI.

Andrew Jekielek was 2-for-4 with a double and two RBIs for Kane with Elijiah Everett 1-for-2 with a walk, a run scored, and two RBIs.

Slay, the first of four ECC hurlers, got the win going 4 ⅓ innings allowing one unearned run on no hits and a walk while striking out five.

Lance O’Neil gave up four runs in ⅔ of an inning, Ryan Shaffer pitched a scoreless inning with two walks and two strikeouts, and Ben Paul went one inning giving up an unearned run on a hit and a walk while striking out two.

BUTLER, Pa. – Behind a strong mound outing from Branson Carson, Moniteau claimed the KSAC title with a 7-1 win over visiting Redbank Valley at Michelle Krill Memorial Field at Historic Pullman Park in Butler.

Carson went 5 ⅓ innings of four-hit, no-run ball. He walked three and struck out 12 on 100 pitches. Dawson Wallace finished off going 1 ⅔ innings allowing a seventh-inning run. He gave up two hits and struck out two.

Carson and Jakub Obman were the key players on offense for the Warriors with Carson going 3-for-3 with a double and two RBIs and Obman going 1-for-4 with a triple, two runs scored, and three RBIs. Obman’s bases-loaded, bases-clearing triple in the fifth broke open a 1-0 game.

Tyler Hetrick was 2-for-4 with a double, a triple, and a run scored for Redbank Valley with Ty Carrier going 2-for-3.

Bryson Bain took the loss going five innings allowing six runs, one earned, on seven hits, a hit batsman, and a walk while striking out five.

Carrier gave up one run on one hit and one walk while striking out two.

Porter struck out eight and didn’t walk anyone, as the Rams took down the Dutch for the second straight day after picking up a 6-2 win on Tuesday that wasn’t reported.

On Wednesday, Camron Marciniak, Aiden Zimmerman, and Ethan Wells each drove in two runs with Marciniiak walking twice and scoring a run, Zimmerman going 1-for-2 with a double and a run scored, and Wells 1-for-2.

Luke Zimmerman was also 1-for-3 with a walk and two runs scored, and Dom Allegretto walked three times and scored twice.

Kaden Dennis, Marciniak, and Wells each had doubles for the Rams with Marciniak going 2-for-2 with a walk and a run scored. Dennis was 1-for-1 with a run scored and three RBIs.

ELDRED, Pa. – Max Splain threw a gem to lead Otto-Eldred to a 9-1 win over visiting Smethport.

Splain went six innings giving up one run on seven hits, a walk, and a hit batter while striking out 11. Braden Maholic pitched a scoreless seventh striking out two and walking one.

Maholic also had himself a day on offense going 1-for-1 with two walks, a double, a run scored, and five RBIs. he was also hit by a pitch.

REYNOLDSVILLE, Pa. – Playing a home game in Reynoldsville for the first time in recent memory because of the Small College Baseball and Softball World Series in DuBois and the fact the field at DuBois Central Catholic High School isn’t playable, the Cardinals had little problem with visiting Cameron County getting a 13-1, five-inning victory.

Kaden Brezenski doubled and homered in the victory while going 2-for-2 with a walk, two runs scored, and five RBIs.

Andrew Green was 2-for-2 with a double and three RBIs for DCC with Brayden Fox going 2-for-3 with a walk, a run scored, and two RBIs.

Carter Kosko scored three times in the victory, and Carter Hickman was 2-for-2.

Jesop Farabaugh went 2-for-2 with a double and a run scored for Cameron County.

Hickman got the win going three innings scoreless allowing two hits and striking out eight. Green pitched one inning allowing an earned run on a hit while striking out one, and Fox went a scoreless inning striking out the side on 15 pitches.

BRADFORD, Pa. – Carson Weaver went 3-for-4 with a walk, an RBI, and three runs scored to lead Brookville to a 14-4 win at Bradford.

Jamison Rhoades was also 2-for-4 with a double and two runs scored for the Raiders with Owen Caylor going 1-for-4 with a walk, two runs, and two RBIs.

Cam Austin was 2-for-4 with a triple, a run scored, and an RBI for Bradford with Ryan Ward scoring twice.

Neff and Hobie Bartoe each drove in three runs for the Gremlins with Neff going 3-for-4 with a run scored and Bartoe 1-for-4 with a walk and two runs scored.

Cole Henry was 3-for-4 with a run scored for Keystone.

Cole Sherwin got the win going five innings allowing four hits and a run while walking two and striking out seven. Neff gave up two earned runs on a hit and three walks in 2 ⅔ of an inning recording both outs by strikeout, and Hutchison went 1 ⅓ scoreless striking out one.

Evens got the win going 5 ⅔ innings allowing two unearned runs on three hits, three walks, and two hit batters while striking out three. Payton Spencer got the final out.

STRATTANVILLE, Pa.- Bryson Huwar went 2-for-3 with a double and four RBIs as Clarion-Limestone beat Oil City, 15-2 in five innings.

The Lions had 15 hits in the game, scoring four runs each in the second and third innings and seven in the fourth.

Huwar got the win, going five innings and allowing two runs on seven hits, striking out seven and walking two.

Will McMahon and Elijah Brosius had an RBI apiece for the Oilers.

PAINT TWP., Pa. – Reece Henderson went 2-for-4 with three RBIs as Rocky Grove collected 14 hits in an 8-3 win over Clarion at the Clarion County Park.

The Orioles scored four runs in the first inning, and Clarion responded with three of its own. That score held until the fourth inning when Rocky Grove struck for a pair of runs. The Orioles scored two more in the fifth to give them a five-run cushion.

Clayton went six innings to get the win, scattering 10 hits and allowing three runs, striking out six and walking one.

Dawson Smail and Chase Kriebel each had three hits and scored a run for Clarion, while Devon Lauer, Daunte Girvan, and Bryce Brinkley had one RBI each.

May 18, 2022 D10 Softball: Wise, Shepard Play Long Ball as CASH Tops LeBoeuf; Palko, Hanley Help Sharpsville Battle Past Franklin
May 18, 2022 D9 SB: Hipps Leads Clearfield Past DuBois; Clarion Gets Key Win; C-L Splits Games
This website or its third-party tools process personal data.In case of sale of your personal information, you may opt out by using the link Do not sell my personal information.
×
Manage consent