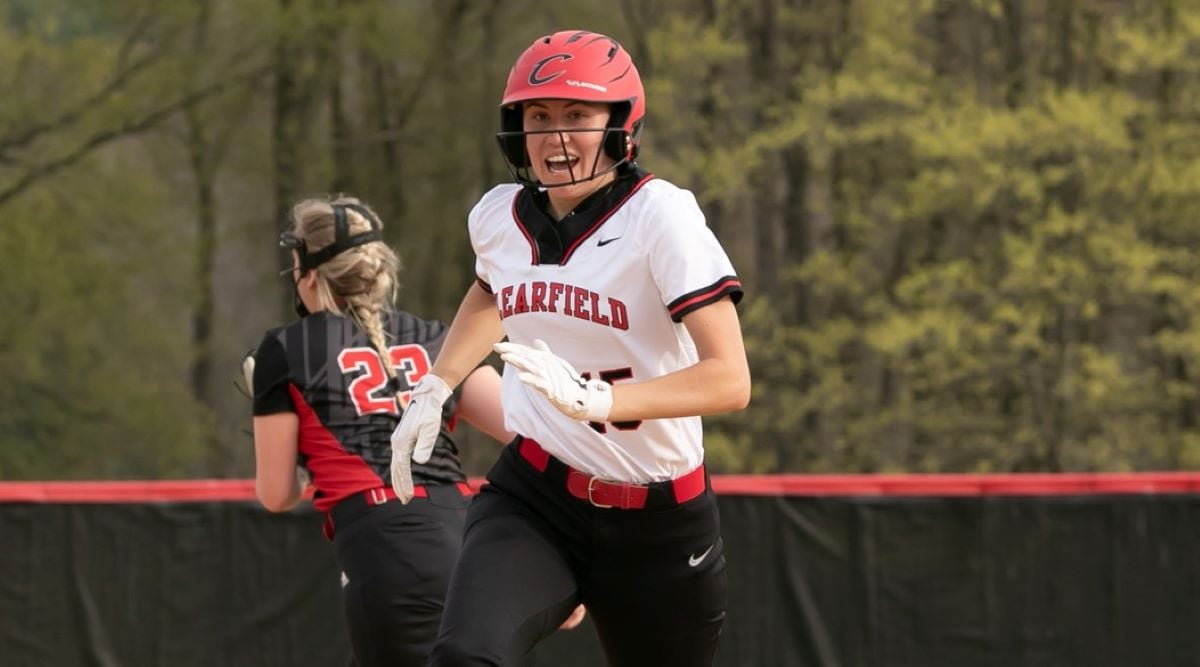 CLEARFIELD, Pa. – Ruby Singleton scored what proved to be the game-winning run on a wild pitch in the sixth as Clearfield defeated visiting Penns Valley, 7-6.

Singleton led off the inning with a double, then moved to third on L Ressler’s ground out. With two outs and A Fedder at the plate, Taylor Bumgardner uncorked a wild pitch that allowed Singleton to come home for the game-winner.

Clearfield took a 2-0 lead in the first thanks to Emma Hipps’ 2-run home run, her first of two dingers in the game.

Jozie Reed answered with a solo shot to start the top of the second, and Bumgardner’s RBI double later in the inning tied it. Gracie Riddle drew a bases-loaded walk to give Penns Valley a 3-2 lead.

Riddle’s RBI single in the third pushed the lead to 4-2, and Lauren McMuturie scored on an error to make it 5-2.

Hipps led off the home half of the third with her second homer, and Alexis Bumbarger hit an RBI single to make it a one-run game.

An error in the top of the fourth gave Penns Valley a run and a 6-4 advantage. But a 2-run error in the bottom of the inning allowed Clearfield to knot it at 6-6, setting up Singleton’s game-winner.

Hipps was 2-2 with three runs scored and three driven in. She also got the win in the circle throwing three perfect innings of relief with eight strikeouts.

PORT ALLEGANY, Pa. – Julie Peterson was a walk away from three innings of perfection as Johnsonburg posted a 16-0 win at Port Allegany.

Peterson issued just a single walk and didn’t allow a hit or a run while striking out eight over her three innings. She also hit an RBI double in the win.

PORT ALLEGANY, Pa. – Peterson, Julia Jones, and Zoey Grunthaner drove in three runs each for Johnsonburg in a 16-1, four-inning win.

Natalie Dunworth was also 3-for-3 with two triples and four runs, while Shelby Sorg scored four runs and Jenna Kasmierski doubled, had an RBI, and scored three runs.

Jones got the win, allowing one run and striking out four in four innings, scattering five hits.

Lucy Klawuhn doubled, had two RBIs, and scored a pair of runs for ECC as eight Lady Crusaders walked two times each.

Emily Mourer got the win, allowing one hit and striking out seven in three innings.

Emilee Dixon had a pair of hits and drove in a run, while Leah Exley had a hit and scored twice.

Natalie Bowser got the win allowing one earned run on one hit with a walk and a strikeout. Exley gave up two hits and struck out a pair in three scoreless innings of relief.

ALLEGANY — Abby Wolfe went 3-for-4 with a triple and four RBI to key Otto-Eldred to its 10th win of the year.

Bri Heller struck out 10 and surrendered just two hits and one walk in the circle.

Jessi Hall was 2-for-3 with an RBI and Suzie Rounsville hit a two-run single for the Terrors (10-1), who plated three runs in each of the second and fifth innings before using a four-run sixth to eventually end it.

Kourtney Magara struck out four (5 walks) while scattering seven hits and she and Kelsey Shea picked up the two hits for Allegany-Limestone (3-14).

“They had good pitching,” O-E coach Andre Veilleux said of A-L. “That’s going to help us out down the road. We’ll see decent pitching the rest of the week.”

SHINGLEHOUSE, Pa. – Oswayo Valley scored nine runs in the second on its way to a 15-0, 3-inning win over visiting Youngsville.

Shayden Mesler had three hits and three RBIs. Charlotte Austin-Keech doubled, tripled, and drove in a pair. Layken Enty had two hits, including a double, and three RBIs.

MaKenzie Mesler got the win giving up two hits with a walk and two strikeouts in three scoreless innings.

May 16, 2022 D10 BB/SB; Hickory’s Djakovich Fires No-HItter; Prep Wraps Up Region 5 Title; Reynolds, Seneca get big Softball Wins
May 16, 2022 D9 Baseball: Punxsy Slugs Past Clearfield in Wild Game; ECC Blanks Bradford; Keystone/NC Split DH
This website or its third-party tools process personal data.In case of sale of your personal information, you may opt out by using the link Do not sell my personal information.
×
Manage consent