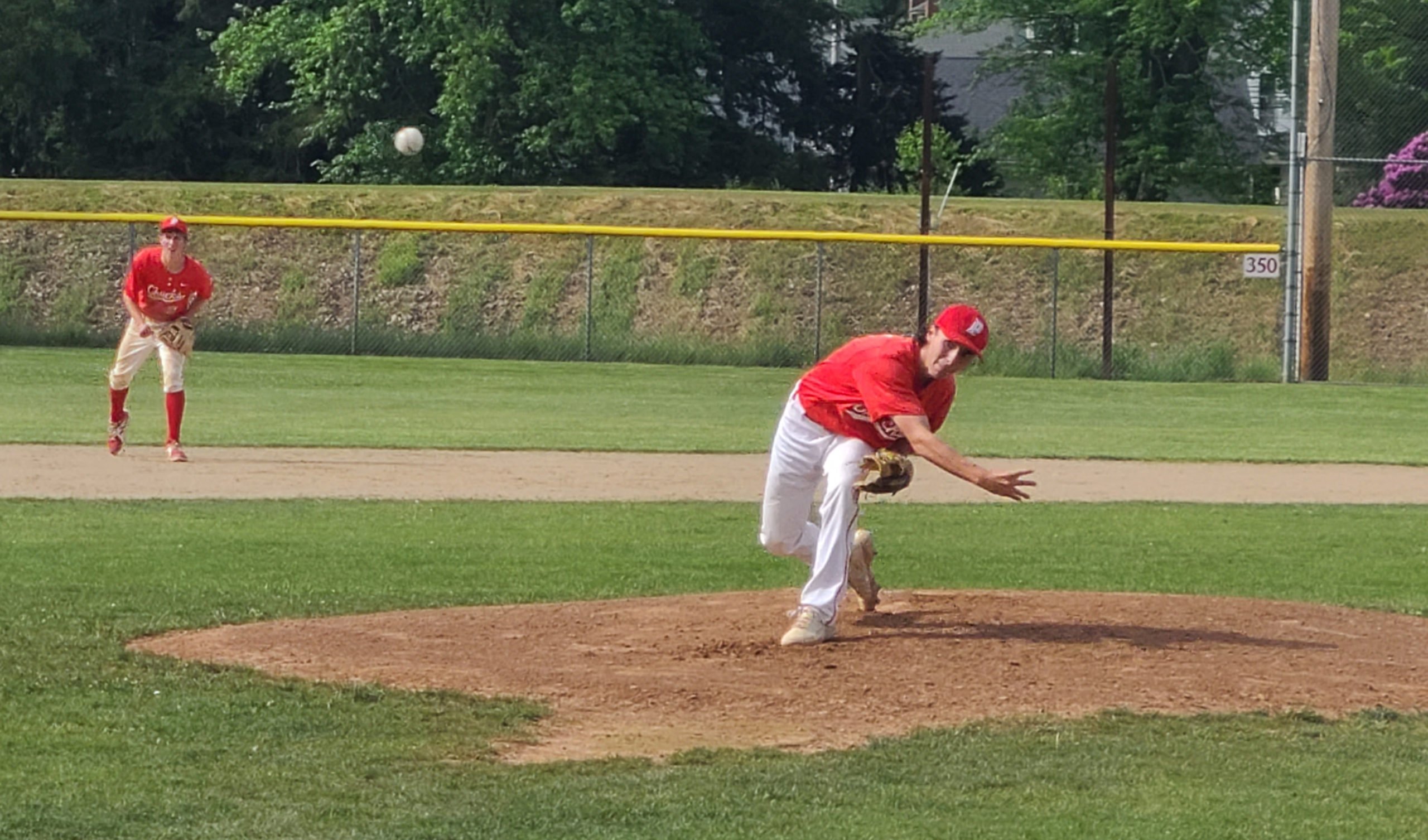 HYDE, Pa. – In a game that featured a combined 43 hits, including five home runs, Punxsutawney earned a wild 27-16 win over Clearfield.

Trailing 10-8, the Chucks scored nine runs in the fifth inning to take control. In the fifth, Peyton Hetrick got things going with an RBI single, followed by a 2-run base hit off the bat of Jake Sikora, an RBI double from Zach Dinger, a two-run single from Alex Phillips, and an RBI double from Zeke Bennett.

Leading 19-16 going into the seventh, the Chucks had another big inning, scoring eight runs to put the game out of reach.

Clearfield’s Blake Prestash had a monster in defeat. He went 3-for-4, homered, drove in six and scored three runs.

Also for the Bison, Morgen Billotte was 3-for-5 with three RBIs and three runs, Kyle Elensky 3-for-4 with a solo home run and Ryan Gearhart 3-for-4 with an RBI.

Hunter Rumsky was saddled with the loss, allowing eight runs in 1 ⅓ innings.

The Crusaders scored four runs in both the first and third innings, with Tettis’ home run coming in the third. He also had an RBI triple.

Joe Geci and Dom Zambanini had a double and two RBIs each for the Crusaders, who had a Ptotal of 10 hits in the game.

Tettis tossed 2 ⅔ innings to get the win, striking out six and walking two without allowing a hit. Ben Paul also fired 2 ⅓ innings, as the Crusaders allowed just one hit.

PHILIPSBURG, Pa. – Philipsburg-Osceola built a 12-0 lead after two innings on its way to a 14-8 victory over DuBois.

Parker White homered, had three hits, and drove in a pair of runs for the Mounties. Also finishing with two RBIs were Ben Gustkey (four hits), Colby Hahn. Nick Coudriet had two hits and three RBIs.

Hahn went five innings to get the win, allowing seven runs (one earned), scattering seven hits, striking out three, and walking one.

The Beavers, trailing 12-0, had a seven-run third inning to get back in the game.

Billy Gray drove in the lone run for DuBois, which took advantage of six P-O errors.

In the first game, North Clarion scored all seven of its runs in the first inning.

Adien Hartle got things going with an RBI single, followed by a double steal that allowed Zeelan Hargenrader during Isaac Gilara’s at-bat. Gilara singled to bring in another run, followed by a Tristan Sliker RBI single and a two-run triple off the bat of Josh Daum put the finishing touches on the frame.

In Game 2, Both teams scored three runs in the first inning and Keystone added two more in the second to account for all the scoring.

Keth and Seth Apel had two hits and an RBI each, while Aidan Sell and Nick Cosper had one RBI each.

Hartle, Ethan Carll, and Wade Peters had an RBI each for the Wolves.

May 16, 2022 D9 Softball: Clearfield Edges Penns Valley; Johnsonburg Sweeps Doubleheader
May 17, 2022 D9/10 Baseball/Softball Schedule Powered by the BHL Sportsperson of the Year Award
This website or its third-party tools process personal data.In case of sale of your personal information, you may opt out by using the link Do not sell my personal information.
×
Manage consent