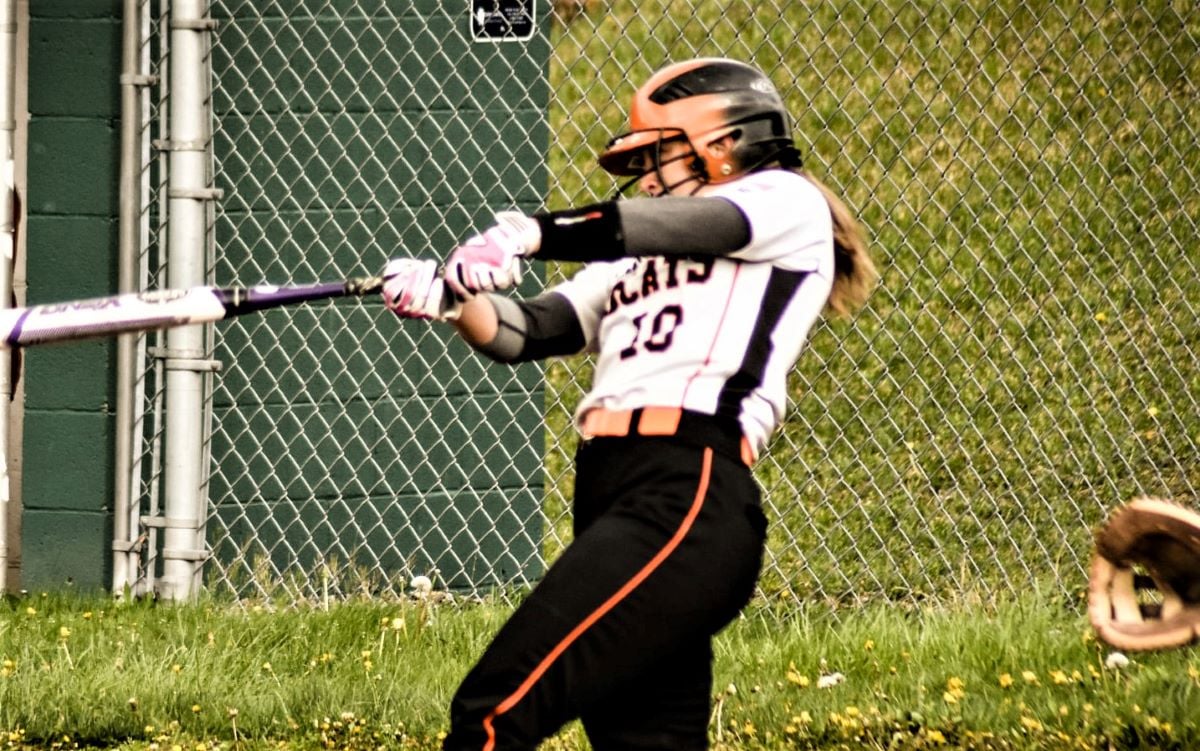 Jordan Best had five RBIs while hitting a home run and a double in Clarion's win at Cranberry Saturday. Photo by Theresa Forrest

It was the Lady Cats second win over the Berries three days after a 6-4 victory Wednesday.

Leading 3-0 going to the third, Clarion sent 12 batters to the plate and got home runs from Brenna Campbell and Jordan Best.

Campbell’s three-run shot made it 6-0, and when Best delivered a three-run, two-out shot to center it capped the inning and gave Clarion a 12-0 lead.

When the Lady Cats tacked on three more runs in the seventh, things seemed comfortable with a 16-6 lead, but as it had done Wednesday when it scored four in the ninth down 6-0, Cranberry rallied again.

A two-run home run by Makala Kearns made it 16-8, a single by Maria Anderson closed it to 16-9, and a double by Alaina Hogue made it 16-10. But that was as close as the Berries got.

Best added a double to her home run and was 4-for-5 with four runs scored and five RBIs.

Jenna Reynolds went 3-for-5 with a run scored and an RBI to pace Cranberry with Reyna Watson adding a 2-for-4 performance with a double, a walk, two RBIs, and three runs scored.

Simko got the win going 4 ⅓ innings allowing six runs, five earned, on 10 hits, four walks, and a hit batter. Beers came on in the fifth and went 2 ⅔ innings allowing four earned runs on five hits and a walk.

CORRY, Pa. – Kendall Young tossed a two-hit shutout with three walks and 15 strikeouts and went 2-for-4 with a double at the plate, as visiting St. Marys beat Corry, 5-0.

Young needed to be at her best, as St. Marys led 1-0 until the seventh when the Lady Dutch exploded for four runs to break the game open.

Kara Hanslovan hit a two-run home run in the seventh and was 1-for-4 with a run scored and two RBIs.

Gianna Surra had a pair of doubles for St. Marys and went 2-for-4, while Brianna Grotzinger was 2-for-4 with a double and an RBI.

Olivia Eckles also went 2-for-4 for the Lady Dutch with an RBI and a run scored, and Shannon Kaiser was 2-for-4 with a run scored. Courtesy runner Jianna Gerg also scored twice.

Lexi Frisina and Melanie Scouten each had hits for Corry.

COUDERSPORT, Pa. – Leatrice Kakolewski went 3-for-3 with a walk, two runs scored, and three RBIs to help Bradford to an 11-6 win at Coudersport.

Adrienne Angell was also 4-for-6 with two RBIs for the Lady Owls, while Carli Perschini went 1-for-3 with three walks and three RBIs, and Olivia Angell was 2-for-4 with a walk, an RBI, and two runs scored.

May 15, 2021 D9/D10 Baseball/Softball Scores Powered by the BHL Sportsperson of the Year Award
May 15, 2021 D9 Baseball: Allegretto, Jburg Walk Off With Elk Co. To. Title; Cameron Co. Gets First Win, O-E Tops Smethport
We use cookies on our website to give you the most relevant experience by remembering your preferences and repeat visits. By clicking “Accept All”, you consent to the use of ALL the cookies. However, you may visit "Cookie Settings" to provide a controlled consent.
Cookie SettingsAccept All
Manage consent