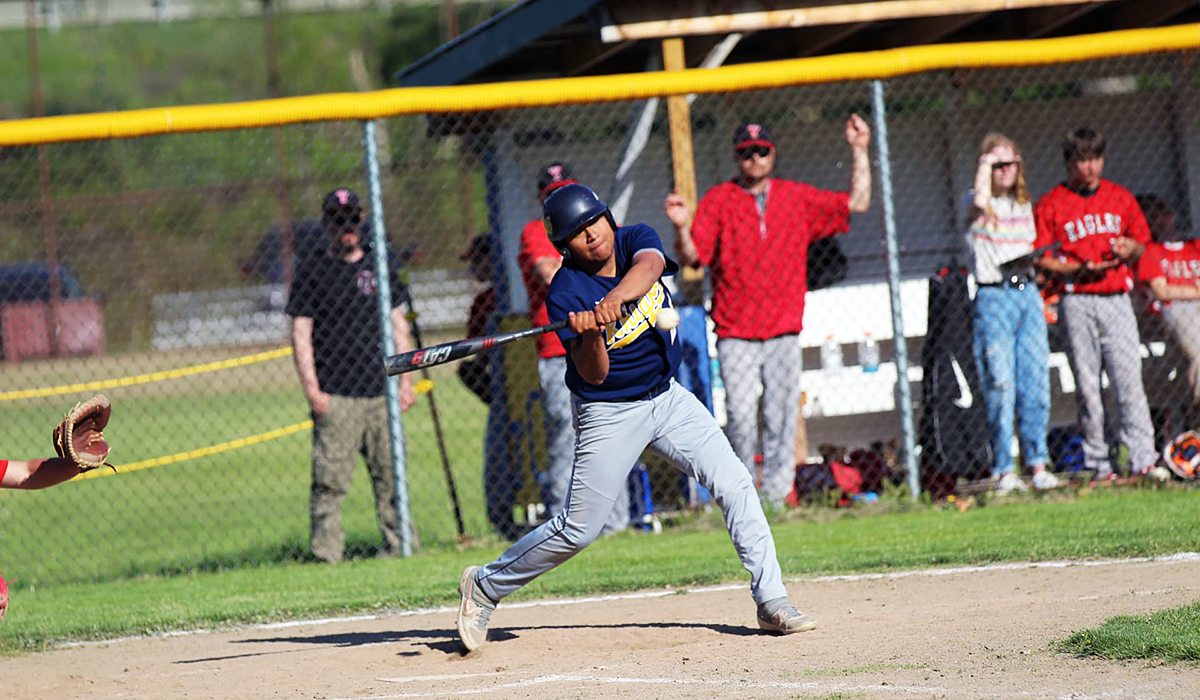 Eisenhower's Zach Rohlin lines up a hit during a game against Youngsville. Photo courtesy Steve Younger.

The Bobcats hit a pair of doubles and took advantage of four errors in the inning to plate the eight runs. Six of the 12 runs were unearned.

Seneca opened the game with four straight hits, including two doubles, to jump out to a 3-0 lead.

Kaveney was masterful on the mound as well. He scattered two hits over five shutout innings, didn’t allow a walk and struck out nine.

Reilly Brown had both of the Braves’ hits and was saddled with the loss. He gave up 11 runs, five earned, on 10 hits with two walks over 2 ⅔ innings. He struck out three.

Williamson didn’t allow a hit or a walk and struck out 13 over his five innings of work. One Royals batter reached on an error. Williamson also went 3-4 at the plate with three runs scored and three RBI.

Cody Smith drove in a pair, while Casey Smith, Aiden Kelly and Michael Pepcillo had two hits each.

Chase Hostetler and Ted Shilito also homered in the inning. Hostetler hit a 3-run shot, while Shilito had a 2-run bomb.

West Middlesex opened the scoring with two runs in the top of the third, but Lakeview answered with three in the bottom of the inning. The Big Reds scored two more in the fourth, and the Sailors answered with four of their own in the home half.

Hostetler finished the game 3-4 with four RBI and a pair of runs scored. Lane Barber had a 4-hit afternoon with three driven in.

Eric Nehlen had a 2-run home run for West Middlesex, part of a 3-RBI day.

The Beavers trailed 7-6 going to the sixth innings but tied the game on a wild pitch before Nathan Tyler’s groundout gave them the lead, 8-7.

DuBois then tacked on four insurance runs in the top of the seventh with Garrett Starr’s two-run double capping the scoring.

Warren, which overcame a 6-4 deficit with a three-run fourth, was paced by Ben Berdine who hit a home run while going 2-for-3 with a walk, a run scored, and two RBIs. It was Berdine’s two-run home run in the fourth that gave Warren the 7-6 lead.

Micah Passmore added a double while going 2-for-4 with an RBI and two runs scored with Gio Elinsky going 1-for-2 with a walk, and two RBIs.

Austin Mitchell, the third of four DuBois hurlers, got the win pitching a scoreless fifth inning despite walking three. Chandler Ho got the save going two innings striking out three.

James Swanson started and went an inning allowing three earned runs on two hits and two walks. Konner Hoffman got the final two outs for the Dragons allowing a hit.

EISENHOWER 14, YOUNGSVILLE 4, 5 INNINGS
RUSSELL, Pa. – Eisenhower put up five runs in the first inning, and six more in the fifth on its way to a 14-4 win over rival Youngsville.

The Knights took advantage of nine Eagles’ errors in the game to score nine unearned runs.

With one run already in, Teagan Gray ripped a 2-run triple in the first to plate Owen Trumbull and Jared Beers. Gray and Zach Rohlin came in when Kael Hunt reached on an error to make it 5-0. Trumbull’s sac fly in the second pushed the lead to 6-0.

Youngsville got on the board in the third when Damon Reese and Dominic Dell came home on Jason Beers’ single. Beers, who had moved to second on a play, stole third and came home on a passed ball to cut the lead to 6-3. Matt DeSimone walked and scored on Nathan Lucks’ single to make it 6-4.

Dillon Benson was hit by a pitch to start the bottom of the fourth. Zane Alexander reached on an error and Benson was able to score on the play while Alexander moved to second. Jared Beers’ sac fly later in the inning brought in Alexander and stretched the Eisenhower lead to 8-4.

The Knights opened the fifth with three straight singles to bring in one run, then Alexander reached on an error which brought in another run. With the bases loaded, both Jared Beers and Gray were hit by pitches to plate two more. Rohlin hit a sac fly and Jared Beers came home on a fielder’s choice to end the game.

Gray drove in three runs, while Jared Beers and Hunt each had two RBI to lead the Knights’ offense. Gray picked up the win as he allowed four runs, three earned, on five hits and a walk with five strikeouts.

SAEGERTOWN 17, UNION CITY 7
SAEGERTOWN, Pa. – Saegertown scored five runs in each of the second and third innings to break open the game en route to a 17-7 win over Union City.

The Bears had taken a 4-3 lead in the top of the second inning before the Panthers responded with five runs in the bottom of the inning.

Three consecutive 1-out singles tied the game at 4-4. Jaden Reagle scored when Zach Balog reached on an error to put Saegertown in front for good. Henry Shaffer scored on a wild pitch later in the inning, then Anthony Hernandez hit a 2-run single to center to make it 8-4.

The Panthers took advantage of seven walks, two passed balls and a hit batter to score five more in the third.

Balog had two hits, scored three times and drove in three runs. Hernandez had three RBI and Shaffer had two hits, three runs scored and two RBI. Chandler Davison got the win after allowing four runs, one earned, on three hits with four walks and four strikeouts in three innings.

Bryce Drayer was 3-4 with a run scored and three RBI to lead Union City.

SLIPPERY ROCK 12, OIL CITY 2, 5 INNINGS
SLIPPERY ROCK, Pa. – Slippery Rock put up five runs in each of the first two innings on its way to a 12-2 win over Oil City.

Ryan Montgomery hit a leadoff double and the Rockets were off and running in the first. Sal Mineo followed with a single and Montgomery came home when Alex Duffalo reached on an error. Mineo came in on Shane Thompson’s sac fly and Duffalo scored on Colin McCune’s ground out. John Sabo’s single scored Nick Kingerski and Brody Galcik singled in Sabo to make it 5-0.

Mineo, Kingerski and McCune each had two hits and scored twice, with McCune adding a pair of RBI. Thompson got the win as he allowed two earned runs on four hits with two walks and five strikeouts.

Charlie Motter drove in both runs for Oil City.

Doyle’s home run was part of a 2-hit day. Andrew Frye had three hits to help lead the offense.

Jack Leipheimer got the win giving up three earned runs in four innings on three hits with a walk and a strikeout.

Hunter Titus, Michael Cantor and Ashton Burleigh each had two hits and an RBI in the win.

Kolin Baker gave up one earned run on four hits with two walks and seven strikeouts over five innings to pick up the win.

Anthony Rizzo and David Gibson each had a pair of hits for North East, while Andrew Aspden drove in the Grapepickers’ lone run.

WILMINGTON 9, JAMESTOWN 4
NEW WILMINGTON, Pa. – Garrett Heller and Shane Book drove in three runs each to lead Wilmington to a 9-4 win over Jamestown.

The Greyhounds scored at least one run in each of the first four innings. Book tripled and Heller doubled in the victory.

NORTHWESTERN 12, GIRARD 8
ALBION, Pa. – In a back-and-forth game, Northwestern came out on top with a 12-8 win over Girard.

The Wildcats jumped out to a 6-1 lead thanks to a 4-run second inning. Girard plated six in the top of the fifth to go ahead 7-6, but Northwestern answered with three in the home half and added three more in the sixth to secure the win.

Austin Kitcey’s grand slam in the second put the Wildcats on top, 5-1, and they added one more in the third to make it 6-1.

Girard took advantage of three errors and three hit batters to plate its six runs in the fifth. Northwestern came back to score two of its three runs with two outs in the home half of the inning.

All told, the Wildcats scored eight of their 12 runs with two outs.

Aeden Pollick, Alex Cottrell and Gabe Thomas each had a pair of hits.

May 14, 2021 D9/D10 Baseball/Softball Scores Powered by the BHL Sportsperson of the Year Award
May 14 D9 Baseball: Coudy Holds Off O-E; Bonanno, Redbank Valley Walk Off Brockway After Rovers Rally