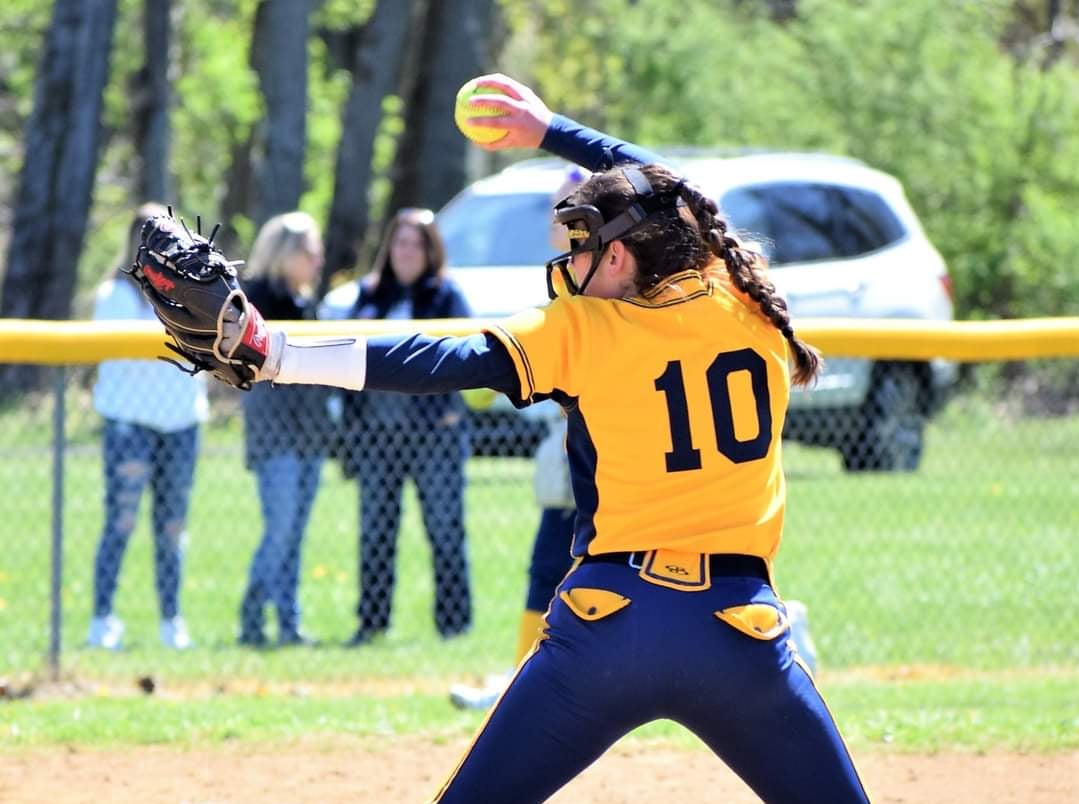 The Bulldogs had a 1-0 lead heading into the inning, but Phillips’ homer gave them the cushion they needed as the Rockets plated a run in the seventh.

Teagan Reichel had a pair of hits a drove in a run in the win.

Rylee Kregel picked up the win in the circle allowing one earned run on two hits with two walks and 15 strikeouts.

Brianna Price doubled and drove in three for the Tigers, while Ella Dworek and Addison Anderson each had two RBIs in the win.

Alex Cozzens doubled and had four RBIs, while Julianna Coletta had two hits and drove in three for North East.

RUSSELL, Pa. – Mikaila Obenrader faced 16 Eisenhower batters on Friday, and struck out 13 of them, including the final 10 she faced as Saegertown came away with a 15-1 win in four innings.

Payton Frank hit a leadoff single to start the game for the Knights. She went to second when Taylor Napolitan drew a walk, then stole third and came home on a passed ball for Eisenhower’s lone run.

Obenrader allowed just one more runner, via a walk, for the remainder of the contest while striking out 12 of the next 13 hitters. She also hit a home run and a double.

Alyssa Arblaster tripled as part of a 3-hit day for the Panthers.

GUYS MILLS, Pa. – The top three in Union City’s lineup drove in all seven runs as the Bears picked up a 7-2 win at Maplewood.

Emylee Zielinski, Kam Bowersox, and Cathryn Reynolds combined for six hits and seven RBIs. Zielinski accounted for three of the hits, including two doubles, and drove in four. Bowersox drove in a pair, while Reynolds doubled and had one RBI.

Abby Tingley got the win allowing two earned runs on 11 hits with a walk and 11 strikeouts.

Sheila Despenes had three hits, including two doubles, and an RBI in the loss. Izzy Eimer had two hits and drove in a run.

ALBION, Pa. – Northwestern scored five runs in each of the second, third, and seventh innings in a 16-2 win over Girard.

Gordon had three hits, including a double, and two RBIs in the win. Kuhn had a pair of hits and drove in three.

Gordon picked up the win allowing two runs, one earned, on four hits with four walks and 13 strikeouts.

ALBION, Pa. – Northwestern scored six runs in the first inning and never looked back en route to a 15-5 win over visiting Girard in five innings.

Neveah Nadal and Rylee Schwartz each had a pair of hits and two RBIs. Both of Schwartz’s hits went for doubles.

Gordon got the win allowing one earned run on two hits with five strikeouts in 2 ⅔ innings.

Maddison Montgomery had three hits, including two doubles, for Girard.

ERIE – McDowell racked up a dozen hits, including a pair of triples and a homer, in an 11-4 win over visiting Harbor Creek.

Gabby DeLuca gave up four runs, three earned, on six hits with three walks and 11 strikeouts to get the win.

Baileigh Bleil drove in a pair for the Huskies.

WATTSBURG, Pa. – Seneca scored nine runs over the fourth and fifth innings on its way to a 12-2, 5-inning win over visiting Iroquois.

The Bobcats scored four runs in the fourth and five more in the fifth to put the game away.

Aubrey Hammill had three hits and two RBIs, while Hannah Wieczorek had two hits, including a triple, and a pair of RBIs.

Lauren Konkol got the win allowing two runs, one earned, on six hits with a walk and nine strikeouts.

Simko was 2-for-5 with two runs scored and four RBIs, and Beers was 1-for-4 with a walk, a run scored, and two RBIs.

Hadlee Campbell also had three RBIs for the Lady Cats while going 2-for-4, Noel Anthony was 3-for-4 with a double, a walk, an BRI, and three runs scored, Jordan Best was 1-for-5 with a triple, a run scored, and two RBIs, and Haylee Cratsley walked once and scored twice.

Young, who hit a batter in the first inning and allowed Ellee Irwin to reach on an error in the fourth, retired the final 12 batters she faced and 17 of the final 18. She struck out 12.

Also recording doubles for the Fires were Emily Aites and Izabelle Flick with Aites going 1-for-3 with a run scored and two RBIs, and Flick going 2-for-3 with an RBI, and two runs scored.

Kam Swearingen and Olivia Guss were both 1-for-1 for Youngsville.

In the nightcap, both McFarlands and Flick combined on a three-inning no-hitter.

Madison McFarland, the second of those pitchers, got the win going one innings walking three.

Flick started and struck out the side in the first, and Emma McFarland pitched a scoreless third.

May 13 D9 Baseball: Clarion, Brookville Rally for Wins; Oswayo Valley, Kane Ride Pitching to Wins
May 13, 2022 D9 SB: Bowser Seventh Inning Grand Slam Lifts Keystone Past Moniteau; Young Strong in Circle for St. Marys; Clarion Tops OC
This website or its third-party tools process personal data.In case of sale of your personal information, you may opt out by using the link Do not sell my personal information.
×
Manage consent