May 13, 2022 D10 Baseball: Galcik Walks It Off For Slippery Rock; Error Costs Mercyhurst Prep in Extra-Inning Loss to Fairview 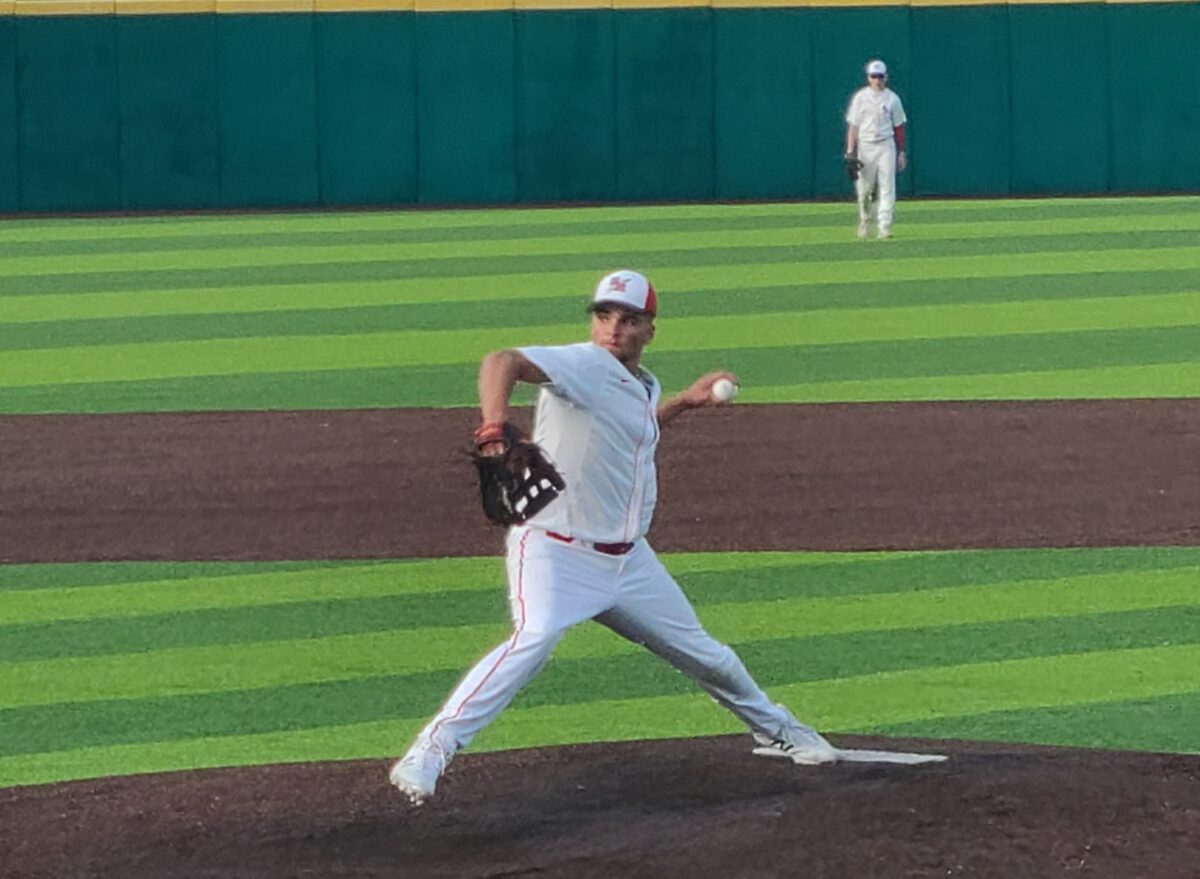 SLIPPERY ROCK 11, HICKORY 10
SLIPPERY ROCK, Pa. – Brett Galcik hit a 2-out, 2-run single in the bottom of the seventh to give Slippery Rock an 11-10 walk-off win over visiting Hickory.

The Hornets plated four runs in the top of the inning to take a 10-9 lead. With two outs and two on in the home half, Hickory intentionally walked Shane Thompson, who was 4-4 on the day, to bring up Galcik with the bases loaded.

Galcik smacked the first pitch he saw into left-center to bring in Lucas Allison and Nick Kingerski for the tying and winning runs.

Fazzone intentionally walks Shane Thompson to load the bases and Brett Galcik promptly answers with a first pitch single to score Allison and Kingerski for the thrilling 11-9 win over Hickory pic.twitter.com/leETX0vmeQ

The Rockets had a 7-2 lead through four, but the Hornets came back to make it a one-run game, 7-6, heading to the bottom of the sixth. Slippery Rock plated a pair of insurance runs in its half of the inning, but Hickory answered with that 4-spot in the seventh.

Galcik’s walk-off capped a 3-hit, 5-RBI afternoon. Two of his three hits went for doubles. Thompson doubled and tripled and drove in a pair. Kingerski had two hits, including a double, scored four times, and had three RBIs.

Luca Bertolasio had two hits, including a triple, and an RBI for Hickory. Parker Hillard and Max Moreland each drove in a pair.

Thompson picked up the win after coming on for the final out of the seventh. Dylan Gordon allowed eight runs, seven earned, on 11 hits with two walks and three strikeouts in six innings.

With the game tied at 4-4, Collin Bolla drew a leadoff walk to start the ninth. Preston King followed with a single to put runners on first and second. Sean Houston put down a bunt and reached on an error by Josh Majczyk. A Kleim, who entered as a pinch runner for Bolla, was able to score the game-winning run on the play.

A 3-run fifth gave the Lakers a 4-3 advantage, but the Tigers tied it with a run in the sixth.

Bolla and Aiden Rubilotta each finished with a hit and two RBIs.

Logan Wells had two hits, including a double, and an RBI for Mercyhurst Prep.

Majczyk took the loss allowing one unearned run on two hits with three walks and a strikeout in 2 ⅔ innings.

The Golden Eagles trailed the Spartans, 5-2, heading into the sixth. A pair of singles followed by sac bunts brought in the first run for KC. Two more singles, two walks, and an error allowed four more runs to come in for the deciding score.

Tommy Malvar had four hits, two runs scored, and an RBI for the Golden Eagles. Riley Mastowski had two hits and drove in two runs.

Stargell Fuhr allowed five runs, three earned, on nine hits with a walk and 11 strikeouts in the complete-game win.

Bruce Spurlin and Dylan Philip each had a pair of hits for the Spartans.

The Sailors scored one run in each of the first, second, and fourth innings, and two more in the fifth to grab the win.

Cody Fagley had a pair of hits and scored twice, while Owen Dye doubled and drove in a run.

Evan Reiser allowed one unearned run on seven hits with two walks and nine strikeouts in the complete-game win.

MCDOWELL 3, WARREN 1
ERIE – McDowell’s pitching limited Warren to just three hits and the Trojans’ offense did just enough to come away with a 3-1 win over the Dragons.

Izaak Ogrodowczyk allowed one earned run on three hits with a walk and five strikeouts in 5 ⅓ innings to get the win. Spencer Deitz didn’t allow a runner and struck out five in 1 ⅔ scoreless relief innings.

Jacob Hower drove in a pair, while Connor Cross had a pair of hits in the win.

For Warren, JT Blum had two of the Dragons’ three hits, including a double, and the lone RBI.

Brady Berdine took the loss allowing three runs, one earned, on three hits with four walks and five strikeouts in four innings. Aidan Zdarko gave up one hit and issued a walk while striking out two in two innings.

COCHRANTON 4, IROQUOIS 0
ERIE – Wyatt Barzak and Andrew Albert combined to throw a 3-hit shutout as Cochranton came away with a 4-0 win at Iroquois.

Barzak gave up two hits and issued three walks with 11 strikeouts in five innings. Albert allowed one hit, didn’t issue a walk and struck out four in two innings.

The Cardinals plated their four runs on just four hits, all singles. They scored two each in the first and third innings.

Barzak, Ben Field, and Ramy Sample each drove in a run.

Brown took the loss allowing four earned runs on four hits with a walk and four strikeouts in four innings.

Hurley’s 3-run shot was part of a 4-run seventh for the Big Reds. Richie Preston doubled and drove in a pair in the win.

Gilson got the win giving up just three hits with three walks and three strikeouts in six innings. Crocker allowed a hit with a walk and a strikeout in an inning of relief.

Ryan Broadwater went the distance for Reynolds allowing eight runs, four earned, on 11 hits with a walk and five strikeouts.

Young had three hits to go along with his five runs driven in. Shaffer also tripled and scored three times.

Zach Balog got the win allowing one earned run on two hits with four walks and nine strikeouts in five innings.

Tarnoci allowed one unearned run on just a single hit with a pair of walks and five strikeouts in his five innings of work.

James Thomas had a pair of RBIs, while Tarnoci and Jack Leipheimer each had two hits in the win.

Reid Courtwright hit a solo homer in the sixth, and the Pickers exploded for six runs in the seventh, thanks in large part to David Gibson’s 3-run shot. Tyler Wittman hit a pair of doubles and drove in three.

Andrew Aspden got the win in relief allowing four earned runs on six hits with three walks and a strikeout in three innings.

Adam Jarrett had two hits and two RBIs in the loss.

Guth hit a pair of doubles to go along with his five RBIs, and Donovan Fike and Colten Cunningham each had two hits and drove in a pair.

Owen Garvey hit a 2-run home run in the win and had three RBIs for the game. Brady Walker, Brighton Anderson, and Mason Walker each had two hits. Mason Walker drove in a pair.

Rocco Tartaglione picked up the win allowing one unearned run on two hits with five walks and three strikeouts.

Burkhardt got the win giving up just two hits and issuing two walks with six strikeouts in three innings.

Hunter Thomas doubled and drove in a pair in the win. Kameron Mong had two hits, including a triple.

Kollin Baker got the win issuing just a single walk and striking out 10 over four scoreless innings.

The Oilers struck for four first-inning runs, but the Bobcats got within a run, 4-3, going to the fifth before scoring three times in the fifth and twice more in the sixth.

Elijah Brosius was also 2-for-4 with an RBI for the Oilers, and Lincoln Kauffman was 2-for-4.

Matt Alston got the win going three innings allowing two hits and a walk while striking out one.

May 13, 2022 D9/D10 Baseball/Softball Scores Powered by the BHL Sportsperson of the Year Award
May 13 D9 Baseball: Clarion, Brookville Rally for Wins; Oswayo Valley, Kane Ride Pitching to Wins
This website or its third-party tools process personal data.In case of sale of your personal information, you may opt out by using the link Do not sell my personal information.
×
Manage consent