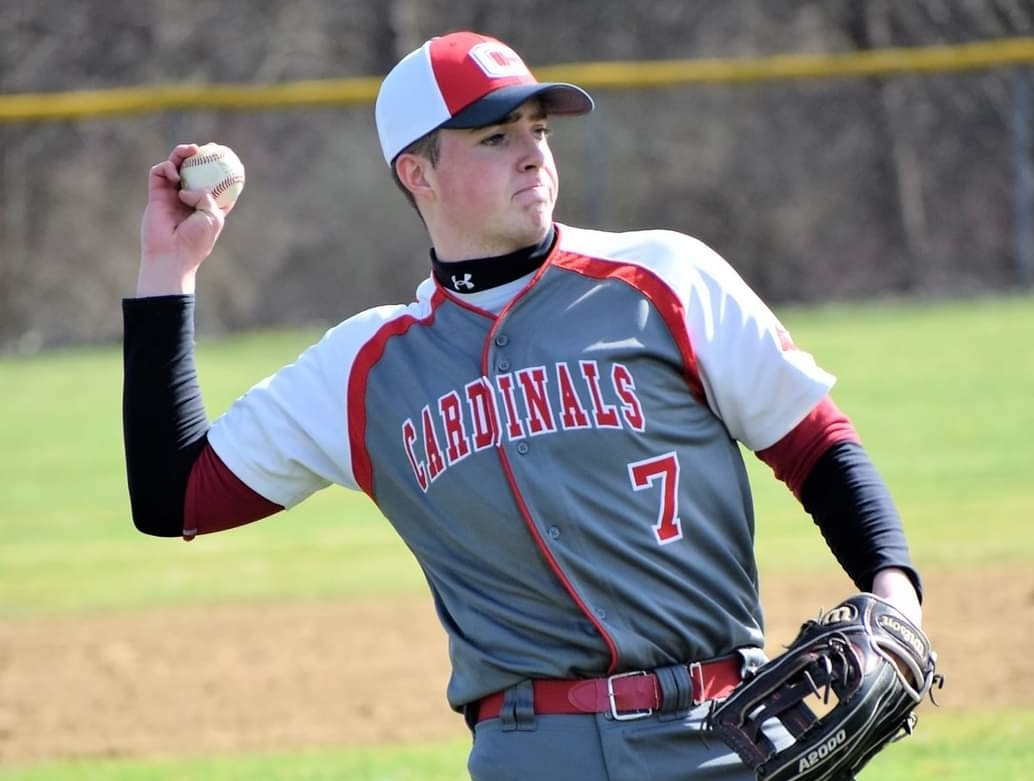 Cochranton's Josh Merchbaker got the win against Eisenhower. Photo by Jeff Parkin.

Currie was named the Allegheny Grille of Foxburg Player of the Game and talked about the win afterward.

Mikey Rodriques was strong on the mound to get the win, allowing six hits and two runs, striking out nine.

The Tigers scored in every inning, including four runs each in the third, fourth, and fifth innings.

Sy Piccirilli hit a solo blast for Sharon in the second inning.

Jacob Hornbeck took the loss, allowing three runs in two innings of work, one of four Oil City pitchers in the game.

RUSSELL, Pa. – Cochranton scored four runs in the fourth inning in a 5-3 win over Eisenhower.

Jacob Lyon’s sacrifice brought in a run, an error accounted for the second tally, followed by an RBI groundout from Ethan Shoup and Ramy Sample’s bases-loaded walk in the fourth.

Josh Merchbaker was credited with the win, tossing 4 ⅓ innings and allowing one run (unearned) on four hits and 11 strikeouts. He didn’t issue a walk. He was relieved by Jack Rynd, who allowed two runs.

Teagan Gray had a double and an RBI for Eisenhower, while Owen Trumbull and Zach Rohlin also had RBIs for the Knights.

Owen Trumbull took the loss, allowing four unearned runs in five innings on just three hits and one walk. He struck out three.

LAWRENCE PARK, Pa. – Cambridge Springs scored six runs in both the first and fifth innings in a 15-2 win over Iroquois.

Henderson got the win, allowing two unearned runs on two hits. He struck out nine.

SHARPSVILLE, Pa. – Kolten Eckles drove in four runs, including a 3-run homer in the third inning as Sharpsville’s bats stayed red hot in a 17-2 win over West Middlesex.

The Blue Devils scored six runs in both the second and third innings and five in the fourth.

Jared Leipheimer went 3-for-4 with a triple, four RBIs and three runs, while Kaleb Gorichky was 2-for-3 with two runs and two RBIs.

Brock Lenzi tossed a pair of scoreless innings with three strikeouts for the Blue Devils, combining on the mound effort with Jack Leipheimer and Cameron Williams.

Hunter Hoffman was 2-for-3 with two RBIs for West Middlesex. Evan Gilson took the loss.

HARBOR CREEK, Pa. – Corry led unbeaten Harbor Creek 2-0 after the top of the first, but the lead turned out to be short-lived as the Huskies earned an 8-2 win.

Cam Williamson led the way, belted two solo home runs for the Huskies, while Gio Barbato was 1-for-2 with a double and two RBIs. Cam Miller also went deep for the Huskies and Aidan Kelly drove in a run.

Austin Vaughn got the complete-game victory, allowing just the two unearned runs on five hits and one walk, striking out eight.

The Dragons led 3-1 and broke the game open with a 4-run sixth inning. Blum, Ben Berdine, and James Swanson all drove in runs in the inning.

Dylan Maeder got the win, allowing one run in four innings on five hits and two walks. He struck out three. J.T. Blum gave up two unearned runs in an inning of relief, while Berdine went two shutout frames, recording all six outs via strikeout.

EDINBORO, Pa. – Alex Beach walked it off with a bases-loaded walk in the bottom of the eighth, sending General McLane to a 2-1 win over Erie.

Alex Leehan got the win in relief for the Lancers, tossing 3 ⅓ perfect innings with four strikeouts. Cliff Morehouse started the game and allowed one unearned run on two hits and four walks, striking out two.

Erie scored its lone run on an error to take a 1-0 lead in the third, and GM tied the game when Clayton Boutte drew a bases-loaded free pass in the sixth.

Conneaut scored two runs in the first inning and single runs in the second, third, fourth, and sixth.

Jayden Mihci and Kyle White both went 2-for-4 with an RBI for the Eagles, while Ryan Richardson, Ryan Herr, Gavin White, and Dan Bartholomew all drove in one run each for Conneaut.

Bartholomew got the complete-game win, allowing seven hits, walking one, and striking out one. He needed just 87 pitches to get through seven innings.

STONEBORO, Pa. – Sanction Multari hit a go-ahead 2-run home run in the top of the seventh inning to send Kennedy Catholic to an 8-7 win over Lakeview.

This came despite four home runs from Lakeview, including two from Chase Hostetler and one each from Mason Bevan and Kendall Crocker.

Kennedy Catholic scored three runs in the fourth inning, with Remington Hart and Davey Cochenhour driving in runs for the Golden Eagles.

Cody May allowed one run in two innings, getting the win in relief. Hostetler took the loss.

GUYS MILLS, Pa. – Alex Kemery and Nate Lucks led a 22-hit Youngsville attack with five hits each in a wild 14-12 win over Maplewood.

The Eagles scored five runs in the fourth and four in the top of the seventh to take a 14-8 lead.

Matt DeSimone was 3-for-4 with two runs and two RBIs and Ian Mancuso 3-for-5 with two RBIs.

Derek Lucks got the win, going 5 ⅔ innings, allowing 14 hits and eight runs with one walk and seven strikeouts.

Elliott Beuchat and Logan Kennedy both went deep for the Tigers, while Noah Burk was 4-for-5 with four RBIs and three runs. Beuchat was 3-for-4 and scored three runs and Ethan Peterson drove in a pair.

MEADVILLE, Pa. – Slippery Rock scored nine runs in the fourth inning on its way to an 18-1 win over Meadville.

NORTH EAST, Pa. – Reed Courtwright went 2-for-3 with a double, triple, and two runs, and Andrew Aspden 1-for-3 with two RBIs to pace North East in a 4-2 win over Girard.

Tyler Wittman got the complete-game win for the Grapepickers, allowing just three hits and two unearned runs, striking out five.

Anthony Rizzo also drove in a run for North East.

GREENVILLE, Pa. – Wilmington broke open a scoreless tie with eight runs in the fifth inning on its way to an 11-3 win over Reynolds.

Rocky Serafino, Ben Miller, Jaret Boyer, Garrett Heller, and Isaac Schleich all drove in runs in the big inning for the Greyhounds.

Schleich, Rocky Serafino, and Dom Serafino drove in two runs apiece, while Heller was 3-for-5 and scored a pair of runs.

Schleich got the win, allowing three runs on three hits and four walks while striking out nine in 5 ⅓  innings.

WATTSBURG, Pa. – Franklin scored seven runs in the fourth inning in a 16-1 win over Seneca.

Matt Wimer got the win, allowing one unearned run on three hits and three walks in four innings, striking out six

May 12, 2021 D10 Softball: North East Sweeps Doubleheader from Conneaut (Ohio)
May 12, 2021 D9 Softball: Coudy Breaks Out Bats in Win; Keystone, C-L Top Forest Area; Brookville Rallies Past Brockway
We use cookies on our website to give you the most relevant experience by remembering your preferences and repeat visits. By clicking “Accept All”, you consent to the use of ALL the cookies. However, you may visit "Cookie Settings" to provide a controlled consent.
Cookie SettingsAccept All
Manage consent