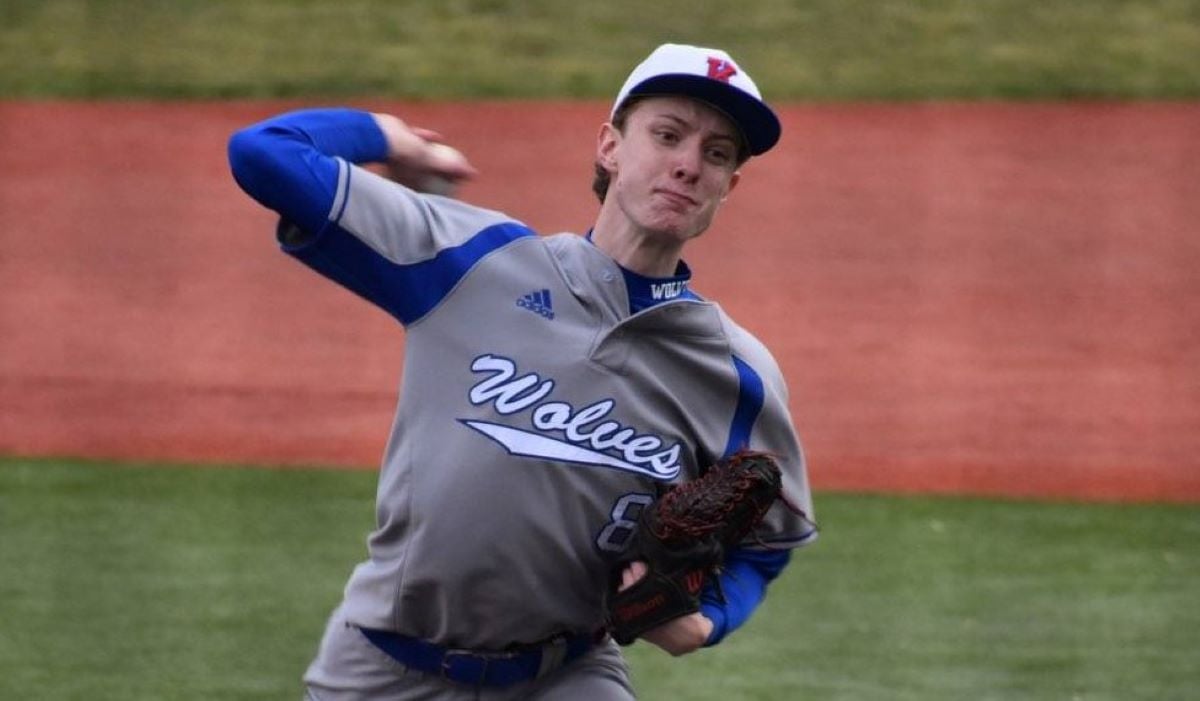 Carson Whiteman of Kane struck out 15 in a three-hit shutout win over ECC Saturday. Photo by Victoria Hallberg

May 1 District 9 baseball and softball recaps

ST. MARYS, Pa. – In a game that started Wednesday in Mt. Jewett and finished Saturday in St. Marys with neither team scoring on Saturday, Kane received a gem of an outing from Carson Whiteman in a 1-0 win over “visiting” Elk County Catholic.

Whiteman went seven innings of scoreless baseball allowing three hits and two walks while striking out 15. He needed just 97 pitches to throw his third shutout of the season. Sixty-seven of his pitches went for strikes, and he started 21 of the 25 batters he faced with a strike. He has now struck out 86 in 33 innings of work.

In the bottom of the first, Harley Morris singled leading off, stole second, and scored on a single by Andy Jekielek.

Jekielek’s hit was the only hit for the Wolves until Whiteman led off the sixth with a double, but was thrown out trying to stretch it into a triple.

Those were the only three hits Kane had off of ECC’s Tommy Slay, the hard-luck loser.

Slay went six innings allowing the one run, it was earned, on three hits and two walks while striking out seven. He threw 94 pitches, 60 for strikes, and started 17 of the 23 batters he faced with a strike.

ELDRED, Pa. – In another game that was suspended Wednesday and resumed Saturday, Otto-Eldred topped visiting Smethport, 10-1.

Smethport had a 1-0 lead Wednesday when the rain came, but Otto-Eldred erupted for 10 runs on just six hits taking advantage of four Hubbers errors, eight walks, and a hit batter.

Jacob Merry had a big day for Otto-Eldred going 2-for-3 with a walk, three runs scored, and four RBIs. He was also the winning pitcher going seven innings allowing one earned run on two hits and a walk while striking out 16.

Also for the Terrors, Austin Cousins was 2-for-4 with two RBIs, and Cole Sebastian was 1-for-2 with a double, two walks, and three runs scored. Max Splain also had a pair of RBIs, and Josh Rhinehart scored twice.

Alex Ognen had the lone RBI for Smethport with Noah Lent scoring the run.

Ognen started Wednesday and pitched a ⅓ of an inning being charged with one run on a walk. Kameron Rounsville pitched three innings allowing three runs, one earned, on three hits while striking out three.

Jake McCracken and Jake Mullins each had three-hit days for the Golden Tide, while Spencer Hoover, Thad Butler, Keegan Wilson, and Chase Graham had a pair of hits each.

Shane Sunderlin added a pair of RBIs for Curwensville going 1-for-5 with a run scored.

Marcus Bennett was 2-for-3 with an RBI and two runs scored for Brockway, while Dylan Bash was 1-for-4 with two RBIs, Ezra Swanson walked once, scored once, and had two RBIs, and Daniel Shugarts was 1-for-3 with a double and a walk. Jeremey Swanson also scored twice for the Rovers.

Sunderlin got the win going two innings in relief of Mullins allowing four runs, three earned, on two hits, a walk, and two hit batters while striking out one.

Jordan Vargeson had a double for Cowanesque Valley.

Carter Moses pitched a ⅓ of an inning hitting a batter.

Caleb Morgan took the loss going ⅔ of an inning allowing eight runs, two earned, on four hits, two walks, and a hit batter while striking out one.

DUKE CENTER, Pa. – Reilly Raught went 2-for-3 with a home run and three RBIs to lead Otto-Eldred to a 12-2, five-inning win over visiting Coudersport.

Bri Heller was also 2-for-3 with a pair of doubles to the Lady Terrors, while Katie Sheeler went 1-for-2 with a double and an RBI.

Makenzie Gentzyel hit a solo home run for Coudersport. It was the Lady Falcons’ lone hit.

Heller got the win in relief of Abby Wolfe. She pitched 3 ⅓ innings of perfect relief striking out nine.

Wolfe started and went an inning and two-third giving up two earned runs on a hit, three walks, and a hit batter. She struck out two.