Match Preview: Clarion/Marian Catholic Play for All the Marbles Saturday in PIAA 1A Volleyball 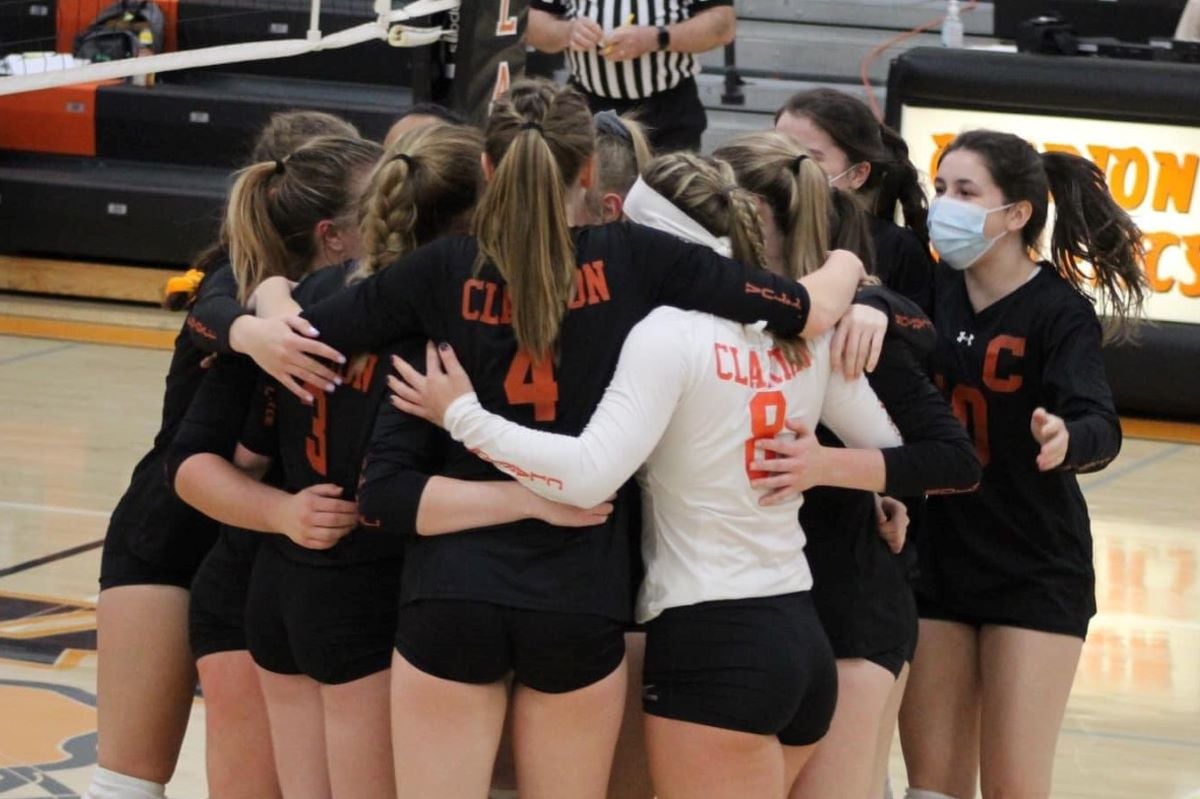 MECHANICSBURG, Pa. – A championship is one the line when Clarion faces Marian Catholic in the PIAA Class 1A volleyball title game at 10:30 a.m. Saturday, Nov. 21, at Cumberland Valley High School.

It’s a matchup of a pair of the Commonwealth’s blue bloods.

Clarion is making its fourth appearance in a state title match and its first since winning its first PIAA title in Class 1A in 2012. The Lady Cats were also PIAA runners-up in 2010 and 2011 in Class 1A.

HOW THEY GOT HERE

The paths to the championship contest this season have been a little different with one team facing adversity and the other rolling.

While Marian Catholic has seen its share of peaks and valleys this season, Clarion has been climbing the mountain from day one.

The Lady Cats have been nothing short of dominating this year winning all 23 matches it has played while losing just one set – the first set vs. Maplewood Sept. 23 – going 66-1 in sets. Since the first-set loss to the Lady Tigers, which was a 26-24 defeat, Clarion has rolled off 54 straight set wins.

It’s not only the domination in set wins and overall victories, it is how Clarion has done it.

In 22 on-the-court matches (Clarion received a forfeit win over A-C Valley in the District 9 quarterfinals because of COVID-19), the Lady Cats have given up more than 20 points in a set just eight times all season, including just once in four playoff matches, and the average set score for Clarion is 24.985 to 12.014.

With the way Clarion has played this season, it’s no wonder 22nd-year head coach Shari Campbell, who won her 400th career match (including three seasons at Clarion-Limestone) and was named one of four AVCA Region 2 Coaches of the Year this week, believes Saturday will come down to how her team plays.

“The main key is to trust ourselves,” Campbell said. “And to do what we are trained to do and let ourselves play.”

The Lady Cats are strong in all facets of the game, and it starts with senior setter Brenna Campbell, Shari’s daughter.

The four-year starter, who is headed to NCAA Division III McDaniel College in Maryland next year, was named an AVCA All-Region performer and the District 9 Class 1A Player of the Year by the PVCA. She is averaging 9.7 set assists per set along with 1.6 digs per set. Campbell leads the team with 51 aces. She recorded her 3,000th career set assist in the D9 title match win over ECC.

“You have to watch her play to see the value of her,” Shari Campbell said. “Those crazy one-handed fist plays she makes and the things she sees. She is able to push the ball across (to our hitters) when you don’t think she can get it there. She knows the game so well, and she has the court sense to know where our hitters are. She is such a hard worker. I have not coached anyone who works hard, and I say that as her coach. She would live in the weight room if I let her.”

Any great setter is obviously helped by great hitters, and Clarion has more than its fair share.

The fourth of four volleyball playing daughters for the Lady Cats – older sisters Karly (Burns) Long (Mercyhurst), Ellie (Pitt and IUP), and Olivia (IUP) were all high school standouts and who went on to play in college – she is trying to become the third member of her family to win a state title – mom has two at Norwin High School (1984 and 1986) and Ellie was on the 2012 Clarion state title team as a Libero.

Burns leads Clarion in kills per set with 5.2 and is averaging 6.3 per set in the postseason. A .435 hitter, Burns has also greatly improved as a defensive player and averages 1.8 digs per set, second on the team, while also ranking second behind Campbell in aces with 49. She recorded her 1,000th career kill in the D9 title match victory over ECC.

“Korrin is a volleyball gym-rat kid,” Shari Campbell said. “She is a three-year starter and she is so explosive and is hitting so well and passing so well. She sees how important the passing is. She is doing the dirty work and not just the flashy stuff.”

Burns has plenty of help in the hitting department, which is what makes Clarion so dangerous offensively.

“It’s never fun just having one hitter,” Shari Campbell said. “Korrin has a team that surrounds her that allows her to play freely and take those big swings. It is fun to see.”

Erica Selfridge, a senior who is in her first year at Clarion after moving to Pennsylvania this year from Bainbridge, N.Y, where she was on a pair of state championship teams in 2017 and 2018 coached by her mom, Tami, while playing with her sister Abigail, now a sophomore at Clarion University (Selfridge was granted a waiver to the PIAA transfer rule allowing her to play in the postseason), has been a fantastic addition to the lineup.

Another 1,000-career kill player – she reached the mark in the PIAA quarterfinal win over West Shamokin – Selfridge might be Clarion’s most complete all-around player.

She is second on the team in kills per set (3.1), is the team-leader in hitting percentage (.474 – the top mark among players in Pennsylvania whose coaches have submitted stats to MaxPreps.com), leads the team in digs per set (2.5), and is third in aces with 43.

“She is rock solid at everything she does,” Shari Campbell said. “She can set the ball – you haven’t seen that yet – she plays defense so incredibly well. It’s a triangle between them (Brenna Campbell, Burns, and Selfridge). There are many times that with any other team it would be a point for the other team, but they magically find a way to not just survive the situation but to score in that moment.”

Shari Campbell said having Selfridge and Burns means that when one player goes to the back row they are replaced in the front row by an equally capable player.

“It’s the dream to go to the back row and have someone replace you in the front row doing the same job and just as well,” Shari Campbell said. “It’s freeing as a player that you don’t have to carry the whole team. They are a dynamic duo taking swings and passing for each other. That’s fun stuff.”

Adding to the joy for Clarion is sophomore Aryana Girvan on the right-side, who averages 2.0 kills per set while nearly hitting .300 herself (.295). She is also second on the team with 17 blocks and has added 51 digs.

“We like her on the right side,” Shari Campbell said. “She has a nice jump and she can block. She is super explosive so you can play around with her, and Brenna does. She has a setter get her the ball, and she is banging it from over there. I also thought she played great defense in the win over Canevin.”

MIDDLES YOUNG BUT GETTING BETTER AND BETTER FOR CLARION

The Lady Cats middles are younger – sophomore Adia Needham and junior Payton Simko – but have come on strong as the season has gone on.

Simko averages 1.1 kills per set and is tied for third on the team in blocks with Burns with 15.

“Payton has gotten better and better the last third of the year,” Shari Campbell said. “In practice, she is lighting up the gym and hitting balls on the floor. She is really instrumental on the serving line, too.”

Needham isn’t asked to score much on the attack checking in with 26 kills on the season, but she has become a key force on defending the attack with a team-leading 22 blocks.

“Adia leads the team in blocks,” Shari Campbell said. “That’s something nobody knows. She leads our team in blocks. Among all these great players, Adia Needhman leads our teams in blocks. She is working hard and doing great things. I believe from winning in the semifinals and playing in the finals, a lot of growth happens, and I am looking for Adia to play like a junior Saturday.”

BEST IN THE BACK: JORDY BEST SOLID AT LIBERO

At Libero, Jordan Best has quietly put together a solid season for Clarion and is third on the team with 1.7 digs per set while making just 19 serve receive errors all season despite receiving a team-high 225 serves in her first season in the Libero role.

“She has embraced this role this year,” Shari Campbell said. “I have watched her turn into someone who loves this role, and she is learning and growing the whale way through and you keep seeing her get better and better. She understands that with her handling the first ball and Brenna the second it allows our hitters to take big swings. And she is a student of the game. A couple of weeks ago, she sent me a film of the Stanford Libero. She is looking for something to inspire her, and I think she has found her place on the court.”

Marian Catholic has some superior players as well, and one that Shari Campbell knows her team has to be aware of is Alivia Karchner.

In four combined District 11 and PIAA playoff matches, Karchner has 78 kills in 16 sets (4.9 per set), including 26 kills (and 11 digs) in the win over Sacred Heart. She also had 16 kills in the PIAA quarterfinals after recording 22 in the D11 title game and 14 in the D11 semifinals.

“She is a nice outside hitter,” Shari Campbell said. “He hit multiple shots. She will hit crosses and lines and will tip the ball. We will have to defend against her.”

Dzuranin also is strong at the net and is coming off a five-kill, eight-block, six-ace performance in the semifinals. She also had 10 kills in the D11 title-game win.

Zeleniak has 19 digs in the semifinal victory and has a 2.5 passer rating on the season, while Wheeler added 13 digs in the win over Sacred Heart.

“Their Libero is consistent and they serve tough,” Shari Campbell said. “They have a couple of models who are active as well.”

Ashlyn Klitsch quarterbacks the offense for the Fillies from her setter position and has 68 set assists (8.5 per set) in the two PIAA playoff matches.

“I think we match up well,” Shari Campbell said. “They play a similar style of game as us. I think the pace that we run and the different tempos is something they aren’t used to seeing and will be an advantage to us.”

Campbell said her team is focused.

“We are absolutely focused in practice,” Shari Campbell said. “There is a lot of positivity and loving the work we are doing. We are keeping practices sharp and short and saving pop for Saturday. We are fine-tuning things and putting a game plan in place.”

Campbell isn’t concerned about the early start time – volleyball players are used to early starts at tournaments but with COVID-19 this season most tournaments weren’t played.

“I have no concerns,” Campbell said. “It’s 10:30 a.m. These kids get up for school early, and we have had several Saturdays this year where we had some tri-matches that felt like that. Our district Saturday was an earlier leave time. We have been there and done that a lot of times. This feels later actually. This is good.”