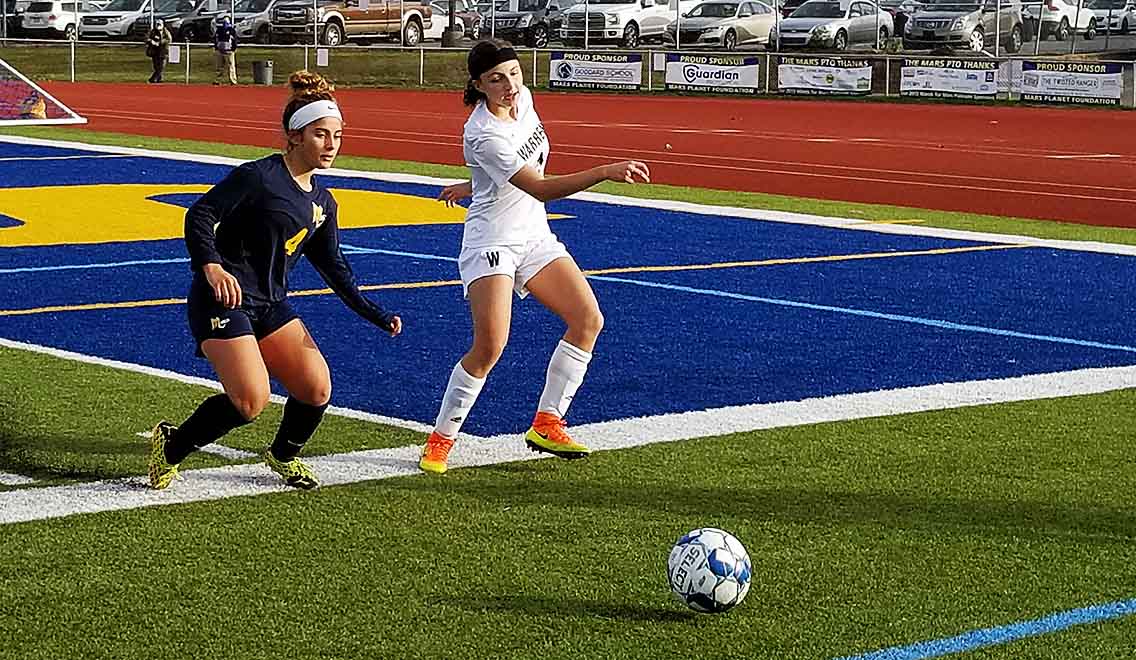 MARS, Pa. – In a battle of highly ranked teams, Mars showed why it is No. 1 with an 8-0 win over visiting Warren in a PIAA Class 3A girls soccer quarterfinal match Saturday.

(Photo by Brian Hagberg. Warren’s Lennon Daily pushes the ball past a Mars player during their PIAA Class 3A girls soccer quarterfinal match at the Mars Athletic Complex, Saturday, Nov. 14, 2020.)

Six different players scored for the Fighting Planets, who also got three goals off of set plays. Mars continued its defense of its state title and will play Mechanicsburg in the semifinals Tuesday.

“We knew they were gonna be good and they were fantastic team,” Warren coach Jeremy Bickling said. “They capitalized on all the opportunities they had.”

It took nearly 10 minutes before Mars (19-0) got on the board. Pitt commit Ellie Coffield got the scoring started. Coffield sent a corner kick to center. The ball bounced off a couple players and came back out to Coffield. She made a move and sent a twisting shot to the far post to make it 1-0.

Gracie Dunaway, a Purdue commit, doubled the lead just over 16 minutes in, again off a corner. The ball came to center and Dunaway was able to get her body on it and push it in.

Those two goals matched the total the Dragons (17-1) had allowed all season.

Bickling had his two best scorers, Kyleigh Wilson and Kyra Wotorson, back in the defensive zone for most of the first half. The Dragons were without sophomore Ella Ordiway due to injury and Bickling was looking to slow the Planets’ offensive attack.

“We found out that Ella did have a concussion from the injury in the previous games,” Bickling said. “So for her safety and health we weren’t able to put her on the field. Without her, we wouldn’t have been in this spot so we thank her. We made the change based off of that. We wanted to put them back to at least slow them down a bit and try and build. It kind of left us a little anemic up top when we did have opportunities, but we had to stop Mars first before we could attack.”

“Early on, it was balanced,” Bickling said. “And we started giving them opportunities and that momentum built for them.”

Ava Lewis kept the momentum going four minutes later. After Warren keeper Alyssa Andersen and the defense was able to stop a pair of shots, Lewis collected the rebound in space and found the back of the net for a 3-0 lead.

Two minutes later, Coffield had her second of the match. She got the ball deep in the offensive zone and put a sharp angle shot inside the far post to put the Planets up 4-0.

The Planets picked up their fifth goal, and third off a corner, with just under two minutes to play in the half. Lewis took the corner kick and sent it to center where Erin Rodgers back-heeled it into the net.

“I wasn’t happy with the fact that we were giving up that many opportunities,” Bickling said. “But we do have to defend the goal first and if it yields a corner, it’s not something that I like. But yeah I knew if you gave them that many corners, they’re gonna find the athletes to put the ball into the goal.”

Seven minutes into the second half, the Planets added to their lead. Piper Coffield fired a shot from a sharp angle on the right side of the goal. As the ball neared the left post, Aly Cooper came flying in to poke it home.

Lewis’ second of the match came six minutes later when Ellie Coffield broke down the right side. She sent a crossing pass and Andersen came out to challenge. Lewis won the race to the ball and was able to touch it past Andersen for the seventh goal and a running clock.

Julia Gagnon closed out the scoring with eight minutes to play on a left-to-right crossing shot.

Brockway, Prep, Fairview Boys Advance to PIAA Soccer Semifinals
Nicholson’s Golden Goal Wins it for Cambridge Springs
We use cookies on our website to give you the most relevant experience by remembering your preferences and repeat visits. By clicking “Accept All”, you consent to the use of ALL the cookies. However, you may visit "Cookie Settings" to provide a controlled consent.
Cookie SettingsAccept All
Manage consent