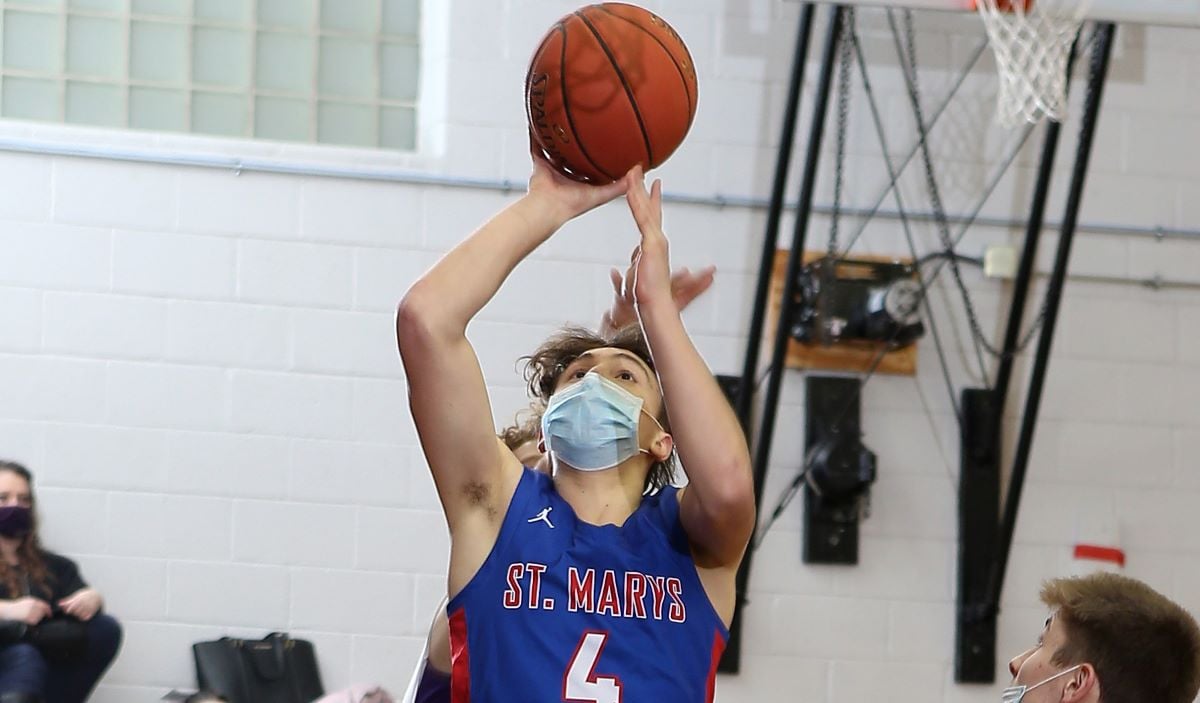 ST. MARYS, Pa. – Behind a historic defensive effort, St. Marys knocked off Elk County Catholic for just the fifth time in the past 20 years, 37-28, at the Dutch Oven at St. Marys High School.

And to beat ECC Friday night, St. Marys had to turn in a defensive performance for the ages limiting ECC to the fourth-lowest point total in school history and its lowest since scoring 19 in a 41-19 loss to Sewickley Academy in the second round of the PIAA playoffs in 2010 when the Crusaders purposely slowed the game down trying to pull the upset. The last time ECC was held to fewer than 28 points in the regular season was in 2008 when Bradford won 42-25.

The Dutch allowed just three first-half baskets while taking a 23-13 halftime lead and limited ECC to nine total baskets in the game, including four 3-pointers, all from Mark Kraus who scored half of the Crusaders points with 14.

BRADFORD, Pa. – Derek Easton continued to step up in place of the injured Hayden Keck scoring 20 points and handing out five assists to lead visiting Coudersport to a 62-33 win.

Playing their third straight game without their leading scorer, Coudersport also got a career-high 17 points from Garrett Kellert, who scored 15 in the second half.

OIL CITY, Pa. – Cam Russell led a trio of Cranberry players in double figures with 19 points, as Pat Irwin’s Cranberry Berries closed out the season with a 57-43 win at Venango Catholic.

JT Stahlman and Noel Bunyak each added 14 points for Cranberry.

Andrew Burda led Venango Catholic with a game-high 23 points while adding seven rebounds. He hit the final 3-pointer of his illustrious career at the horn giving him 1,224 career points, the seventh-most in school history.

Jake Liederbach added 15 points and eight rebounds for the Vikings.

ULYSSES, Pa. – Richie McDowell hit a pair of first-quarter 3-pointers to set the tone on a 15-point night, as visiting Smethport tuned up for the playoffs with a 55-40 win over Northern Potter.

Alex Ognen added nine points for the well-balanced Hubbers who also got eight apiece from Brandon Higley, who hit a pair of second-quarter 3-pointers, and Chase Burdick, and seven each from Layne Shall and John Adamoski.

Hungiville led the Lady Hubbers with 11 points while adding six rebounds and a steal, while Nelson had 10 points, seven rebounds, and three assists.

Jessica Wagner added six points, 14 rebounds, and five assists for the Fires who also got 10 points from Amber Guzzi and seven from Tori Brown.

SHEFFIELD, Pa. – Eisenhower outscored Sheffield 12-6 in the fourth quarter en route to a 33-28 victory over the host Wolverines.

Delaney Chase led the way for Eisenhower, scoring 10 points while filling up the stat sheet with six rebounds, five assists, and three steals.

Annabel Sheldon had 13 points to pace Sheffield, while Emily Foster chipped in with nine.

Carson Seneta added 11 points and Zach Williams 10 for the Lancers, who had 10 different players make their way into the scoring column.