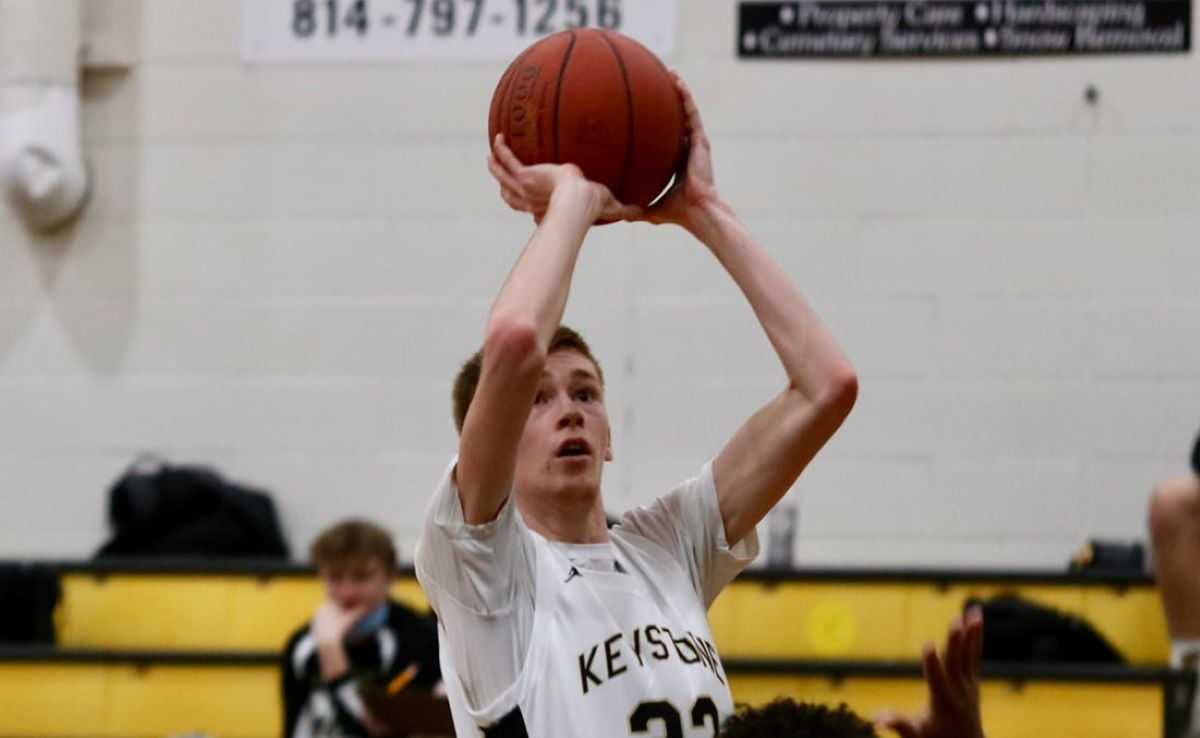 Colin Say had a team-high 16 points for Keystone in its win over A-C Valley Thursday. Photo by Mary Rearick

KNOX, Pa. – Brandon Pierce hit three third-quarter 3-pointers to fuel a 12-point advantage in the quarter for Keystone, as it pulled away from visiting A-C Valley in the second half for a 62-40 victory.

Pierce who hit four triples in the game finished with 15 points, while Colin Say led Keystone with 16 points. Bret Wingard chipped in nine points and 12 rebounds.

Levi Orton scored 12 of his team-high 18 points in the second half for A-C Valley.

SHINGLEHOUSE, Pa. – Turning around a 14-point loss two nights ago to Galeton, Oswayo Valley knocked off the visiting Tigers, 54-43, and in the process broke a 16-game losing streak.

Russell led the Berries with 15 points, Stahlman added 14, and Bunyak 10.

Zuke Smith had a double-double with 12 rebounds and 12 points.

SLIPPERY ROCK, Pa. – Jace Miner scored 17 of his team-high 21 points in the second half as Brookville raced to a 71-50 win over Slippery Rock.

Danny Laurer got off to a quick start for the Raiders, who led 33-21 at halftime, scoring 13 of his 16 points in the first half. Lauer knocked down four 3s in the win.

Ethan Plesakov scored a game-high 23 points for Slippery Rock, while John Sabo chipped in with 13.

March 4, 2021 D10 Hoops: Joncas Leads Corry Boys Past Eisenhower
March 4, 2021 D9 Girls’ Hoops: Lary Leads Bradford to Win; Weaver Hits Career High for Keystone
We use cookies on our website to give you the most relevant experience by remembering your preferences and repeat visits. By clicking “Accept All”, you consent to the use of ALL the cookies. However, you may visit "Cookie Settings" to provide a controlled consent.
Cookie SettingsAccept All
Manage consent