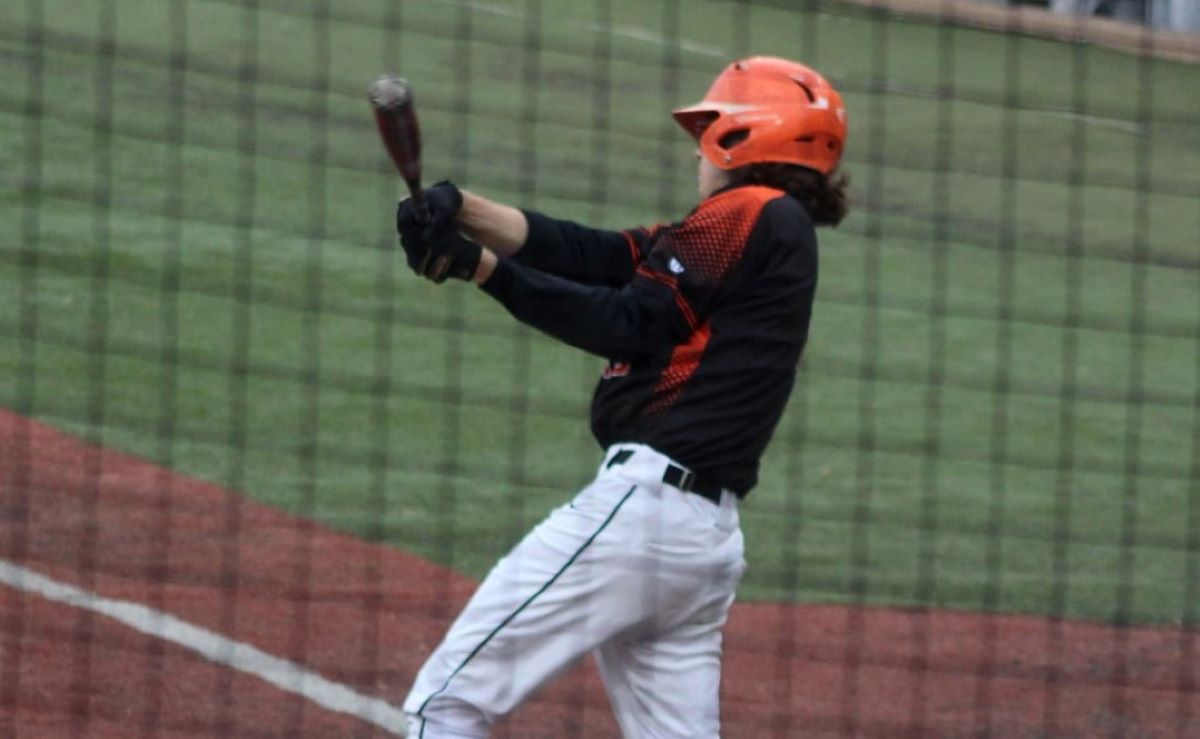 Gary Matus of Clarion singles in the third inning of the Bobcats 6-4 win over Karns City Thursday. Matus had three hits in the game. Photo by Nathan Girvan

Clarion then tacked on a run in the seventh on a Bryce Brinkley single.

Mallick Metcalfe was 2-for-3 with a double, two runs scored, and two RBIs.

Braden Grossman was also 2-for-4 with two doubles for the Gremlins.

Tanner Miller got the win in relief of Ryan Alston going 3 ⅓ scoreless, hitless innings. He walked two and struck out one. Alston pitched 3 ⅔ innings giving up four runs, two earned, on seven hits, and two walks while striking out two.

Michael Neff took the loss in relief of Metcalfe. He gave up three runs, two earned, on three hits and two walks while striking out one.

Metcalfe went five innings giving up three runs, one earned, on six hits, two walks, and a hit batter while striking out two.

Crissman started and went five innings to get the win. He allowed one earned run on four hits and three walks while striking out seven. Cooper came in and pitched two scoreless innings of relief to get the save. He allowed one hit and a walk and struck out four.

Offensively for the Falcon Knights, Gary Amsler drove in a pair of runs and was 1-for-3. He had one of the two hits for A-C Valley/Union. The other hit was a single by Zach Cooper who was 1-for-3 with an RBI.

Forrest was also 1-for-3 with an RBI for the Berries, while Nate Bell had a double, and Lavrich was 1-for-2 with two walks and a run scored.

Peyton Hetrick also had a two-run triple for the Chucks.

Tyger got the win in relief going three innings and giving up one run. Jake Sikora started and pitched two scoreless innings.

ERIE, Pa. – A six-run fourth inning helped lift Cathedral Prep to a 10-0 win over Erie in its season opener.

Nick Jackson, Joey Spano, Luke Costello, Patrick Sullivan, and Jackson Mattocks all drove in runs in the fourth for the Ramblers.

Costello and Sullivan drove in three runs apiece for Prep.

The Ramblers used six different pitchers in the win, allowing just two hits and two walks while striking out nine. Tai Hopkins (1 IP, 1 strikeout, 1 walk) was credited with the win.

Chris Ramos took the loss for Erie, allowing five runs on three hits and a walk while striking out six in three innings of work.

NEW CASTLE, Pa. – Hickory scored three runs in both the fifth and sixth innings to earn an 8-5 win over Neshannock.

The top three hitters in Hickory’s lineup – Luca Bertolasio, Clay Wiesen and Joey Fazzone led the way. Bertolasio went 3-for-4 with three doubles and three runs scored, while Wiesen was 1-for-2 with a triple, two RBI and two runs and Fazzone 2-for-4 with two RBI.

Tyson Djakovich got the win for the Hornets, allowing just one run in four innings on five hits and three walks while striking out one. Bertolasio was able to escape a bases-loaded jam in the seventh to get the save.

Michael Altmyer drove in a pair of runs for Neshannock.

MERCER, Pa. – Brett Galcik belted a grand slam, part of an offensive outburst for Slippery Rock in a 21-2, three-inning win over Mercer.

Galcik drove in five runs in the game, with Kyle Ritenour knocking in three and John Sabo, Lucas Allison and Ryan Double two each.

Allison had three hits for Slippery Rock, which scored 12 runs in the third inning. Galcik, Ritenour, Ethan Drushel, Shane Thompson and Sabo all had doubles for the Rockets, who also took advantage of eight Mercer errors.

Walker Vogan went 2 ⅓ innings to get the win, allowing just one hit and three unearned runs, walking two and striking out two.

GROVE CITY, Pa. – Landon Haggart went 4-for-4 with a double and four RBI as Grove City earned a 12-1, five-inning win over Sharpsville.

The Eagles broke the game open with eight runs in the fourth inning. Luke Tubbs and Dylan McElhinney drove in two runs apiece, with Tubbs going 3-for-3.

James Thomas drove in the lone run for the Blue Devils.

NEW WILMINGTON, Pa. – Trailing 4-0, Wilmington scored four runs in the fifth inning and two more in the sixth to rally for a 6-4 victory over Rocky Grove.

Ben Miller, Isaac Schleich, Dom Serafino and Dylan Batley all drove in runs in the fifth for the Greyhounds. In the sixth, Serafino drove in the go-ahead run with an RBI single, while a sixth run crossed the plate on a catcher’s interference call.

Reece Henderson and Travis Knupp had two hits and an RBI each for Rocky Grove, with Eli Moreland and Brett Stevenson also driving in runs.

Olivia Plummer had a big day for the Berries, who sent 22 batters to the plate in the second inning, going 3-for-4 with three triples, two runs scored, and three RBIs.

Alisha Beggs also doubled and tripled while going 2-for-2 with a walk, three runs scored, and two RBIs, while Reyna Watson was 2-for-3 with a triple, two runs scored, and an RBI, and Riley Coe walked twice and scored three times.

Emerson Stevens had a double for Union.

Magen Walzak took the loss giving up 15 unearned runs – eight errors did the trick – on seven hits and five walks. Stevens allowed five runs, three earned, on five hits and two walks while striking out one in an inning of relief.

STONEBORO, Pa. – Faith Jones had a monster game, going 4-for-4 with three home runs and eight RBI as Wilmington rolled to a 15-2 win over Lakeview.

Jones’ home runs came in the first, third, and fifth innings for the Greyhounds. Graeson Grubbs also had a big day at the plate for Wilmington going 2-for-4 with three RBI, while Brianna Fisher was 2-for-2 with two RBI.

Ava Williamson got the win, allowing just two earned runs in her five innings of work, striking out 13 and walking five.

Leading 4-3, the Eagles broke the game open with three runs in the fifth. Courtney Saylor, Rylie Eaton, Logan Jones, and Severson all doubled for the Eagles, with Jones driving in a pair of runs.

Eight of the nine Grove City starters recorded at least one hit.

Miller’s lone run allowed was unearned. She allowed one walk and struck out four.

At the plate for the Hornets, Layla McClung had a pair of RBIs, while Kaelyn Fustos and Loren Myers each went 2-for-3.

HERMITAGE, Pa. – Lilly Holt drove in a pair of runs as West Middlesex earned a 15-0, three-inning win over Kennedy Catholic.

Ava Gilmore allowed just one hit in getting the win, striking out eight without issuing a walk.

Hanley allowed just one hit and struck out 11 without issuing a walk.

Offensively, Lily Palko belted a grand slam, part of a nine-run third inning for the Blue Devils. Reagan Knicely went 2-for-4 with three RBI, while Haley White, Izzie Candiotti, Keely Whitaker, and Erika Grandy all drove in one run apiece.

Katelyn Robson drove in three runs for the Braves, as did Grace Belfiore and Jenne Dash. The Braves also took advantage of 13 free passes issued by North East pitching.

Svetz also took the loss in the circle, allowing 12 runs on one hit and eight walks.

The Lady Gremlins led 7-2 after five innings before the Yellowjackets tied the game with five runs in the top of the fifth.

Karns City went back ahead, 8-7, in the bottom of the sixth on an RBI single by Jess Dunn.

But Freeport struck for the five runs in the top of the seventh to steal the victory.

The big hit in the inning was a 3-run home run by Sydney Selker.

Sydney Selker was 2-for-5 with the home run, a double, two runs scored, and three RBIs to lead Freeport, while Jenna Selker also homered and doubled while going 2-for-4 with a run scored and four RBIs.

Ashley Fox and Zoe King each had doubles for Karns City with King going 2-for-5 with two runs scored and Fox 1-for-4 with a run scored and an RBI.

Dunn was also 2-for-3 with a walk, two runs scored, and two RBIs for the Lady Gremlins

Fort LeBoeuf Tops Cathedral Prep in Boys’ Volleyball
McDowell Girls’ Lacrosse Tops Villa
This website or its third-party tools process personal data.In case of sale of your personal information, you may opt out by using the link Do not sell my personal information.
×
Manage consent