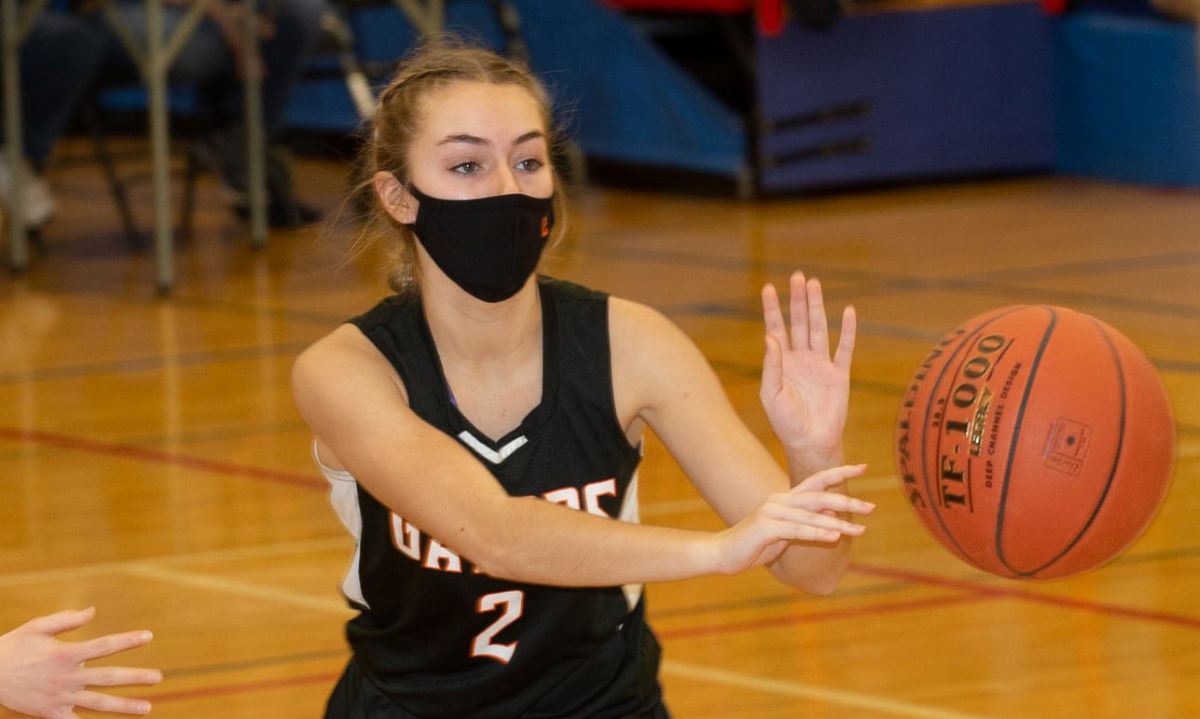 Evin Stauffer of Port Allegany hit a key 3-pointer to give the Lady Gators the lead for good with two minutes to play Wednesday. Photo by Patrick Crants. See more of Crants work here.

EMPORIUM, Pa. – Evin Stauffer drained a 3-pointer from the right elbow with two minutes to play to break a tie game and help visiting Port Allegany to a 51-45 win over Cameron County.

With the game tied at 45, Stauffer took a pass from Bree Garzel and thought about passing the basketball. But when Cameron County didn’t come out to defend her, she took the shot to give the Lady Gators a 48-45 lead.

Watch the shot at around the 1:13:05 mark of the Cameron County Live Feed

Garzel then hit 3 of 4 free throws in the final 40 seconds to help seal the win.

The fourth quarter was a back-and-forth affair with seven lead changes and two ties.

Cameron County went into the final eight minutes up three, 36-33, before shots by Garzel and Stauffer gave Port Allegany a 37-36 advantage.

An old-school 3-point play by Kaelee Bresslin gave the lead back to Cameron County, 39-37, before Garzel hit a 3-pointer off an offensive rebound that she dribbled out beyond the 3-point line, to put Port Allegany back ahead, 40-39.

More foul shooting – this time two from Hailey Hilfiger – gave the Lady Raiders the advantage again, 41-40, before Garzel drained a 25-foot 3-pointer from just inside the volleyball attack line at the top of the circle with 4:16 left to make it 43-41 Port Allegany. The shot can be watched at the 1:08:18 mark of the above video.

Aubree Lorenzo tied the game back up at 43 moments later when she connected from just inside the arc on the right side, and two Hilfiger free throws gave Cameron County its last advantage, 45-43, with 3:04 to play.

Gracie Archer, though, tied the game at 45 with 2:47 left setting up the Stauffer shot that gave Port Allegany the lead for good.

Garzel had a game-high 21 points to go with 12 rebounds, and seven assists while Jade Evens added 13 points, eight rebounds, and four blocked shots and Stauffer 12 points.

Hilfiger had a double-double for Cameron County with 14 points and 17 rebounds, while Bresslin also scored 14 points. Morgan Lorenzo chipped in eight points and nine rebounds.

Faith Jacob added 10 points for the Lady Cardinals who also got eight tallies from Jessy Frank.

Alexas Pfeufer tallied nine points for DuBois, which saw a total of nine different players make their way into the scoring column.

CURWENSVILLE, Pa. – Jenna Mertz exploded for 26 points to lead West Branch to a 55-33 win at Curwensville.