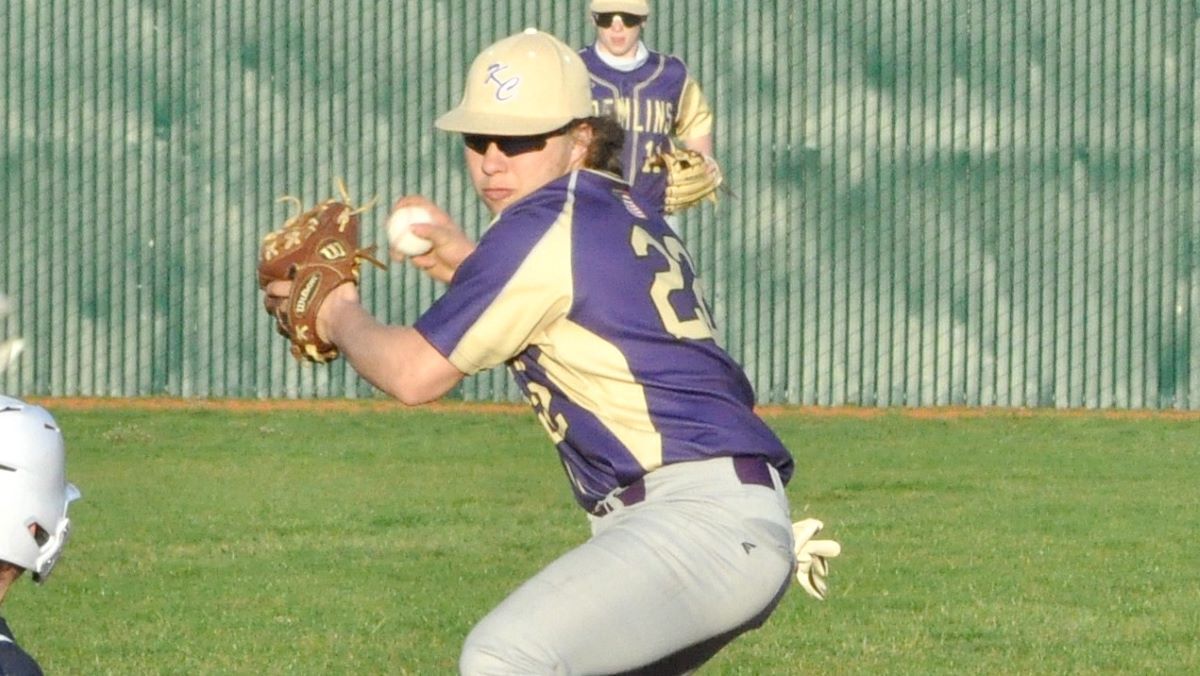 BUTLER, Pa. – Braeden Rodgers’ two-run single to centerfield with two outs in the bottom of the seventh inning lifted Karns City to a 12-11 win over visiting Brookville at Michelle Krill Field at Historic Pullman Park in Butler.

Rodgers single off Brookville’s Jamison Rhoades capped a three-run bottom of the seventh for the Gremlins, who trailed 11-9 going to the seventh.

Brookville had broken a 9-all tie in the top of the seventh on a Jace Miner sacrifice fly and fielder’s choice that saw Carter Kessler thrown out trying to steal second when pitcher Mallick Metcalfe threw to second with Kessler trying to steal the base but Rhoades racing home with the 11th run for the Raiders.

But in the bottom of the seventh, Rhoades walked the leadoff batter, Brayden Christie. A passed ball moved Christie to second, Conner Shaffner then singled home Christie before Cole Sherin singled.

The runners moved up 90 feet on a wild pitch putting runners on second and third with no outs.

Rhoades struck out Metcalfe before intentionally walking Michael Neff to load the bases.

A strikeout of Zack Blair then put Brookville one out away from the win, but Rodgers took an 0-1 pitch from Rhoades and sent it into center for the game-winning hit.

“It was a fastball, a little up and inside,” Rodgers said. “I kept my hands inside and put it the other way.”

The game was back-and-forth with Karns City taking a 4-0 lead in the second before Brookville scored six in the third to take a 6-4 lead. The Raiders then added a run in the fifth to make it 7-4 before the Gremlins answered with five in the fifth to go back up 9-7.

Brookville retied the game with two in sixth.

Metcalfe got the win in relief for Karns City going 1 ⅔ innings in relief of Neff allowing three runs, all earned, on four hits and a hit batter while striking out three.

Rhoades took the loss for Brookville going 1 ⅔ innings allowing three runs on three hits, a walk, and three strikeouts. He was the fourth pitcher for the Raiders.

Rhoades was also 3-for-3 at the plate while getting hit by a pitch, scoring a run, and driving home one. His courtesy runner also scored a run.

Brookville’s defense came up with a gem of a play in the fourth when Metcalfe tripled to right-center with two outs and Wyatt Fleming at first.

Fleming, though, was thrown out at the plate when Miner, the centerfielder, hit Roney, who was playing first, who threw on to Rhoades, who was catching. Rhoades tagged out Fleming, who made high contact with Rhoades.

PUNXSUTAWNEY, Pa. – A five-run fourth inning helped Punxsutawney overcome an early deficit on its way to a 9-4 win over visiting DuBois Central Catholic.

DCC took a 4-0 lead in the top of the fourth but was held scoreless the rest of the way.

Ashton Stonbraker had a pair of RBIs for the Chucks in the win going 2-for-4 with a double. Alex Phillips was also 2-for-3 with a double and a run scored, while Peyton Hetrick was 1-for-4 with a triple, two runs scored, and an RBI. Graham Lott also scored a pair of runs for Punxsutawney.

Carter Hickman was 2-for-3 with a double, a walk, a run scored, and an RBI for DCC, while Matt Pyne was 2-for-4 with a run scored.

DUBOIS, Pa. – Kaylee Risser and Shyanne Lundy each had three hits and two RBIs to help DuBois Central Catholic to a 14-4, five-inning victory over visiting Elk County Catholic at Heindl Field in DuBois.

Mia Meholick hit a home run for the Lady Cardinals while going 2-for-4 with two runs scored and two RBIs, and Jessy Frank was 2-for-3 with a double, and three runs scored.

Morgan Tyler got the win going five innings allowing four runs, one earned, on three hits and a walk while striking out eight.

Sydney Alexander was 1-for-2 with a run scored and an RBI to pace ECC.

March 29, 2021 D10 Baseball/Softball Recaps: Lakeview Baseball Rallies Past Mercer; Hickory Softball Wins
March 30, 2021 D9/D10 Baseball/Softball Scores Powered by the BHL Sportsperson of the Year Award
We use cookies on our website to give you the most relevant experience by remembering your preferences and repeat visits. By clicking “Accept All”, you consent to the use of ALL the cookies. However, you may visit "Cookie Settings" to provide a controlled consent.
Cookie SettingsAccept All
Manage consent