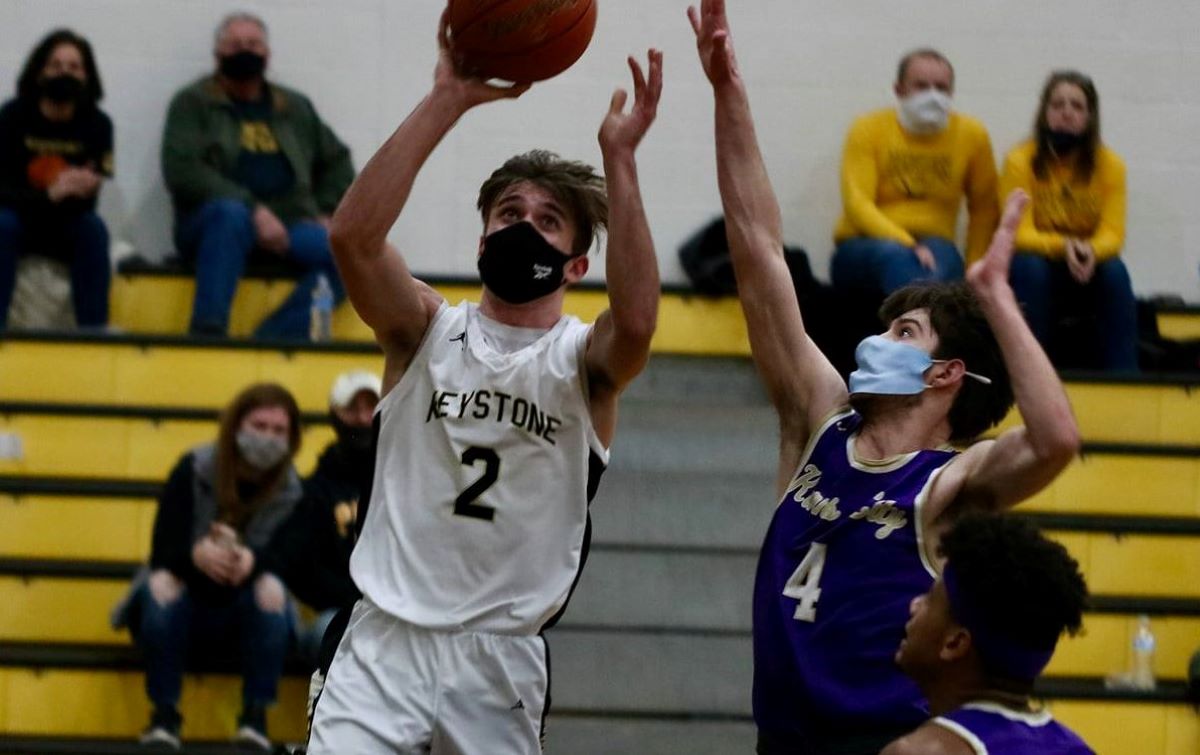 Logan Sell of Keystone (No. 2) takes a shot as Karns City's Chase Beighley (No. 4) defends and the Gremlins Micah Rupp looks on. Sell and Beighley led their teams in scoring in Karns City's win Tuesday. Photo by Mary Rearick

KNOX, Pa. – When Karns City needed them the most, its two senior stars stepped to the forefront to help the Gremlins to a 47-44 win at Keystone that most likely secured the top seed in the upcoming District 9 Class 2A playoffs while giving the program its first 20-win season in nearly two decades.

Karns City, which had led since Beighley’s basket with 4.9 seconds left in the first quarter, found itself trailing, 42-40, for the first time since the first quarter when Keystone’s Zander McHenry buried a 3-pointer with 4:06 to play.

Waltman, who had been shut down for most of the game being held to four points through three quarters, hit one of two free throws with 3:18 left to make it 42-41.

Beighley then took overcoming away with a steal, stripping the ball from Keystone’s Brandon Pierce, and a breakaway layup 15 seconds later to put the Gremlins ahead to stay, 43-42.

Thirty seconds later, Beighley made it 45-42 with another basket.

It was then time for the big man to step up.

Following a Karns City timeout with 1:52 to go, Beighley found Waltman in the high block, and Waltman used what has become a patented spin move to put the Gremlins ahead by five, 47-42.

“We thought we could get better looks for me if I was up top,” Waltman said. “It ended up happening.”

Waltman laughed when asked about his spin move being his trademark.

“We need to keep that quiet in case people are watching,” Waltman said with a laugh. “I don’t use a spin move at all.”

“Coming in, we had it written up on the board that we wanted our 20th win,” Beighley said. “Twenty-and-two sounds cool. We also wanted that first-week bye, also. We just wanted to come in, work, hard, and play good defense.”

Beighley had a game-high 17 points for Karns City to go with two steals and two rebounds with Waltman adding nine points, seven rebounds, two steals, and two blocks despite Keystone’s constant defensive double teams that left him frustrated at times.

“Every time they pack you in there, it is always frustrating,” Waltman said.

Watch Beighley and Waltman in the postgame

Keystone fell to 13-4 after losing for the second time to Karns City, which beat the Panthers 62-46 Feb. 3 in Karns City. The Panthers finish the regular season by hosting A-C Valley Thursday.

Prior to the game, Greg Heath was honored for breaking former Union coach Don Stemmerich’s all-time KSAC/Clarion County win record. In a special surprise for Heath, Stemmerich was at the game to present him with an award from the Keystone booster club. That ceremony can be watched here.

BROCKWAY, Pa. – Noah Adams’ 3-pointer a minute into overtime gave Brockway a lead it never relinquished on its way to a 53-49 win over visiting Curwensville.

Curwensville took a 49-47 lead 18 seconds into the extra session on a Trevor Lansberry basket.

But, out of an inbounds, play, Adams drilled a 3-pointer from the right elbow.

The shot can be seen at the 1:33:45 mark fo the Brockway Live Stream

Marcus Bennett then gave the Rovers a three-point lead, 52-49, with 2:25 to go before a late free throw by Alex Carlson sealed the win.

Michael Lezzer scored on a putback of a missed shot by Lansberry with 15.8 seconds left in regulation to force overtime. Watch the shot in the above video at the 1:29:15 mark.

That came just 15 seconds after Lewis Painter had put Brockway ahead, 47-45, with a layup that can be watched at the 1:29:00 mark of the above video.

Painter led Brockway with 17 points with Bennett adding 13 and Adams 10.

Terry had a game-high 23 points for Curwensville, although Brockway limited him to just two in the fourth quarter and overtime combined.

Danny McGary chipped in 13 points and hit a pair of fourth-quarter 3-pointers to help the Golden Tide get the game to the extra session.

RIDGWAY, Pa. – A bizarre ending to an otherwise great basketball game helped Kane pick up a 41-33 overtime win at Ridgway.

The game was tied at 32 at the end of regulation before Kane took a 3-point lead, 36-33, late in overtime thanks to baskets from Andrew Jekielek and Zuke Smith sandwiched between a free throw by Ridgway’s Dom Allegretto.

Smith basket, off a Matt DeLuca pass with 58.2 seconds left made it a three-point game.

Allegretto missed a 3-pointer for Ridgway, but Aaron Sorg got the rebound and tried a putback that was no good.

The Elkers bench thought a foul should have been called, although the video from The Hound, 97.5 FM in Ridgway appears to show the proper non-call was made.

Nevertheless, Ridgway fouled Jekielek with 24.8 seconds left sending the Wolves’ player to the free-throw line to shoot a 1-and-1.

At that point, two technical fouls were whistled on the Ridgway bench with the Elkers coach, Tony Allegretto, ejected from the game.

The first technical wasn’t called by the official administering the foul on Jekielek at the table, mere feet from Allegretto, but from the official who was at least four steps across midcourt towards the Kane basket.

Then, moments later, the same official whistled another technical foul.

Kane proceeded to hit 5 of 6 free throws with Jekielek making both of his, and Carson Whiteman making three of the four technical fouls to seal the victory.

Jekielek paced Kane with 13 points, including six in the fourth quarter and overtime combined. Whiteman chipped in with eight points. Whiteman also dished out two assists and grabbed four rebounds, with Smith hauling down five boards to go with six points.

GALETON, Pa. – For the first time in just over two years, the Galeton basketball team was victorious thanks to a 49-35 win over visiting Oswayo Valley.

Noah Shutt scored 18 of his game-high 22 points in the second half, as the Tigers won for the first time since beating Sullivan County, 50-48, in the District 4 Class 1A consolation game March 1, 2019. Galeton had lost 34 straight.

Carter Stedman led Oswayo Valley, which was playing for the first time since Feb. 19, with 14 points with Cayden Black adding 10.

Lasko led the Dutch, who have won three straight against teams – Coudersport and Cameron County – with a combined win total of 25, with 14 points with Housler adding 12.

Hayden Brown had a game-high 16 points for Cameron County, who got a basket just as the horn sounded to make the final score three points, while Caden Beldin added 10 points.

AUSTIN, Pa. – Still playing without an injured Hayden Keck, who missed his second straight game, Coudersport received a career-high 24 points from Derek Easton in a 62-43 road win over Austin.

DUBOIS, Pa. – Lennon Lindholm hit four 3-pointers on his way to a game-high 18 points in DuBois’ 47-37 home win over Hollidaysburg.

Chooch Husted added 10 points for the Beavers who also got eight tallies from Jordin Sommers.

Hollidaysburg received 10 points each from Jack McGinnis and Rocco Grassi.

Ethan Kness had 14 points for DCC.

SENECA, Pa. – Beau Verdill scored 20 points, hauled down 13 rebounds, and came away with seven steals to help Clarion to a 70-38 win at Cranberry.

Hunter Craddock had a double-double for the Bobcats with 13 points and 15 rebounds, Cal German added 17 points, six assists, and four steals, and Christian Simko scored 10 points.

MARIENVILLE, Pa. – Up 69-23 going to the fourth quarter, Redbank Valley exploded for 30 points despite a running Mercy Rule clock in the final eight minutes on its way to a 99-35 win over Forest Area at East Forest.

Owen Clouse and Mason Clouse each chipped in with eight points for Redbank Valley.