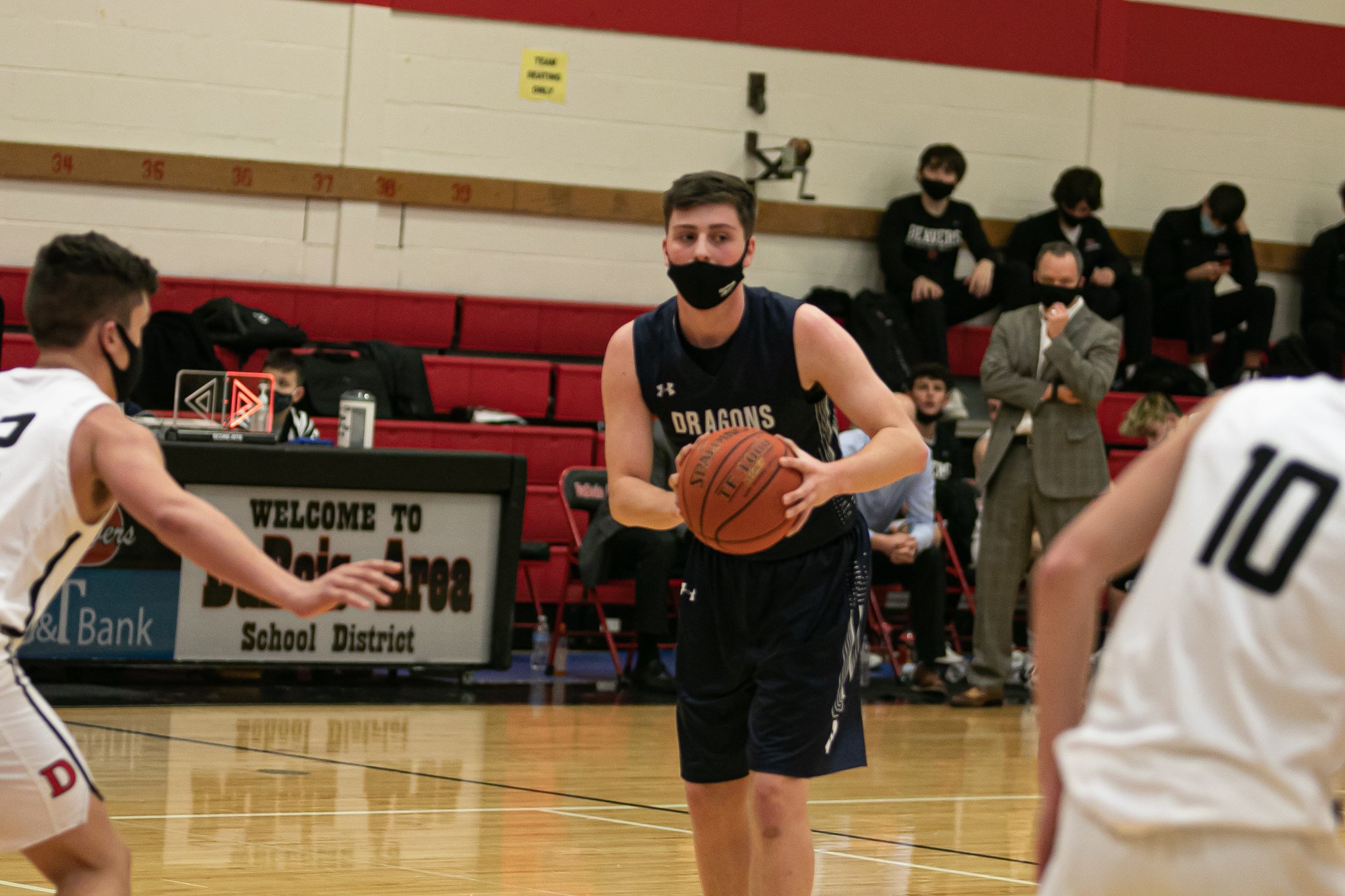 Berdine and Parks Ordiway each knocked down six 3s, with Berdine knocking down four in the third quarter alone.

That third quarter saw the Dragons extend an eight-point halftime lead into a 67-46 advantage.

Berdine (10 rebounds), was one of two Warren players with a double-double, as freshman point guard Tommy Nyquist scored 11 points and dished out 11 assists.

Ordiway scored 12 of his 18 points in the first half, while Payton Barnes added eight points and 10 rebounds.

Nick Brundage scored 22 points for Corry, including 10-of-10 from the free-throw line, while Logan Joncas hit six tripled on his way to a 20-point effort.

LAWRENCE PARK, Pa. – Union City outscored Iroquois 15-7 in the fourth quarter to rally for a 47-42 victory.

Matthew Bennett scored seven of his game-high 20 points over the final eight minutes for the Bears, while Cole DeSimone knocked down a pair of 3’s in the fourth, part of a 13-point performance.

Ben Burkhardt scored 17 points to lead Iroquois, eight of which came in the first quarter.

The Blue Devils outscored the Trojans by 10 in the second quarter on their way to the win.

North East jumped out to a 9-point first-quarter lead en route to the win.

The ‘Pickers knocked down 10 three’s in the contest.

Jayden Shinsky and Nathan Held had 12 points each for Cambridge Springs, while Trent Wheeler chipped in with 11.

Plesakov netted 21 and Sabo 20, as the Rockets outscored the Orioles 42-28 in the second half.

Cameron Keyser netted 11 points for the winners, while Dan Parks and Josh Hill added 10 each.

FARRELL, Pa. – Farrell outscored Lakeview by nine in the second half on its way to a 49-46 victory.

Marcell Banks added 12 points and Marquell Darnell 10 for the Royals, who outscored the Bulldogs by 13 in the first quarter.

Charlie Waid had a game-high 15 points for Meadville, while Matt Panchura added 10.

In the win over Reynolds, Emily Anthony led the way with 19 points, while Carlie Beatty netted 16.

Anthony had 16 points in the win over Mercer and Taylor Tomko 12.

COCHRANTON 45, YOUNGSVILLE 22
YOUNGSVILLE, Pa. – Cochranton used a balanced scoring attack and stifling first-half defense to come away with a 45-22 win. The Cardinals built a 25-6 halftime lead with more than half of those points coming from 3-pointers.

Chelsey Freyermuth hit a pair, while Carley Richter, Shelby McBryar and Lexie Moore added one each. Moore connected on two more in the second half on her way to a team-high 11 points. Freyermuth and Jaylin McGill each finished with 10 points and McGill added seven rebounds.

Kenzie Olewine scored nine of her team-high 11 points in the second half for the Eagles.

COCHRANTON 61, EISENHOWER 40
RUSSELL, Pa. – Playing in its second game of the evening didn’t slow Cochranton’s offense as the Lady Cardinals buried 14 3-pointers in a 61-40 win at Eisenhower Tuesday.

Cochranton, fresh off a 45-22 win at Youngsville, started the 3-point barrage early against the Lady Knights. Lexie Moore hit three from behind the arc and Carley Richter and Ella Gallo added one each.

Moore finished with a game-high 20 points, including 15 from 3-pointers. Richter added 12 points, all from the long ball, while McGill chipped in eight points and Gallo, McBryar and Abby Knapka with six each.

Marino had a team-high 18 points and Chase 14 for the Knights.

The Yellow Jackets went on a 23-1 run in the second quarter en route to the win.

ERIE, Pa.- Villa Maria wrapped up an unbeaten regular season with a 61-18 win over General McLane.

A total of 10 different Villa players made their way into the scoring column.

SAEGERTOWN 48, YOUNGSVILLE 21
YOUNGSVILLE, Pa. – Mollie Przybowski hit five 3-pointers, including four in the second half, on her way to a game-high 17 points to lead Saegertown to a 48-21 win over Youngsville.

The Eagles had four first-half 3-pointers, three from Olewine and a fourth from Kamryn Weissinger, to keep the game within single digits at the half, 22-14. But Przybowski took over in the second half where she scored 14 of her 17 points.

Ava Jones had nine points and Averie Braymer eight in the victory.

March 2, 2021 District 9 and District 10 Basketball Scores
March 2, 2021 D9 Girls’ Hoops: Benson’s OT 3’s Lift Bradford to Win; Raught Helps O-E Beat Kane
We use cookies on our website to give you the most relevant experience by remembering your preferences and repeat visits. By clicking “Accept All”, you consent to the use of ALL the cookies. However, you may visit "Cookie Settings" to provide a controlled consent.
Cookie SettingsAccept All
Manage consent