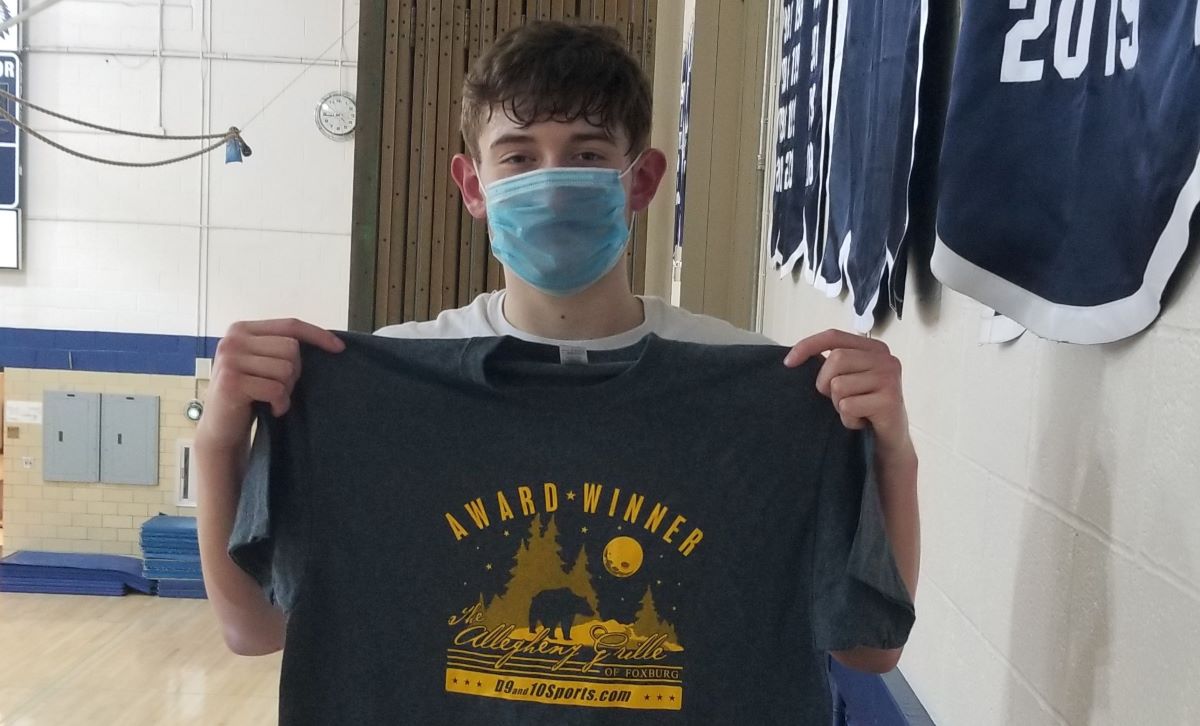 WEST SUNBURY, Pa. – Levi Orton hit a 53-foot at the third-quarter horn to give A-C Valley a 10-point lead going to the fourth quarter, and the Falcons went on to beat homestanding Moniteau, 62-42.

Orton received the inbounds pass just shy of the volleyball attack and took a shot that went “swish” to give A-C Valley a 44-34 lead.

It was a monster night from Orton, he scored a season-high 37 points while adding 10 rebounds and five steals. Twenty-three of those tallies came in the second half, including 14 in the fourth quarter, to help the Falcons take a six-point, 25-19, halftime lead and turn it into the 20-point victory.

BROCKWAY, Pa. – Using a 10-0 run that spanned the final minute of the third quarter into the first four minutes of the fourth quarter, visiting Punxsutawney picked up a 50-46 win over Brockway.

The Chucks trailed 41-37 following a six-foot jumper by Brockway’s Alex Carlson with 2:26 left in the third quarter.

But Punxsutawney didn’t allow another point to the Rovers for nearly seven minutes and held Brockway without a basket for over 10 minutes in getting the comeback win.

Andrew Young was the offensive catalyst in the run for the Chucks scoring six of the 10 points during the run.

Gabe Kengersky’s basket off an offensive rebound by Graham Lott with 25.8 seconds left in the third quarter put Punxsutawney ahead, 43-41, going to the final eight minutes with the 6-0 quarter-ending spurt starting within a Young basket off a Noah Weaver assist with 1:09 left in the quarter.

After Weaver scored on a fastbreak 18 seconds into the fourth quarter, neither team managed to score until Young’s layup nearly halfway through the frame.

Brockway finally broke its scoring drought when Lewis Painter hit one of two free throws with 3:45 left, and then the team each exchanged a free throw with Ethan Presloid hitting one for the Chucks and Jared Marchiori for the Rovers to make it 48-43 with 2:34 to play.

It remained that way until Carlson got an offensive rebound and hit an eight-foot shot with 25.4 seconds left to cut the Punxsutawney lead to 48-45.

Kengersky then hit one of two free throws with 20.9 left to push it back to a two-possession game before Painter hit one of two with 9.3 to go to get Brockway back within three.

Young then put the game away when he hit a charity shot with 8.7 seconds left.

Young had a game-high 15 points for Punxsutawney with Nick Humble adding 10, Weaver nine, and Presloid, who was 6 of 8 from the line, eight.

The Crusaders were up by just two, 40-38, going to the fourth quarter but outscored the Falcons, who were without leading scorer Hayden Keck (shoulder injury) 11-5 to get the eight-point win.

BROOKVILLE, Pa. – In an up and down affair between two fast-paced teams, it was the Brookville Raiders who ran away with a 72-62 win over visiting Clarion Monday night.

Both teams were in the midst or ending a busy stretch of games — the Raiders their fourth in five days and the Bobcats continuing a five-game run in six days ending Tuesday at Cranberry — but the pace was quick and physical.

The Raiders led from start to finish with the exception of an 11-11 tie in the first quarter. However, the Bobcats seemed to be never far away with Cal German lighting it up for his 26 points.

But Brookville finished its busy run 3-1, bouncing back from its 56-42 loss at DuBois Saturday with another big performance from Jace Miner, who went for 26 points as well with 12 rebounds.

Ruhlman, who was named the Allegheny Grille of Foxburg Player of the Game talked about the victory.

Bain had 14 points, 15 rebounds, and 11 assists for the Bulldogs who were led by 24 points from Marquese Gardlock, who netted all 24 in the first half. Chris Marshall chipped in with 23 points for Redbank Valley, including 19 in the second half. Owen Magagnotti chipped in with 13 points.

Redbank Valley led 58-10 at halftime, as Venango Catholic once again played without leading scorer Andrew Burda because of an injury.

Jake Liederbach led the Vikings with 15 points with Colin Liederbach chipping in nine points.
after the Bulldogs went ahead 58-10 at halftime

Redbank Valley joins Clarion, which scored 100 against Venango Catholic Jan. 27, in the 100-point club this year. The Bulldogs are the 12th District 9 team since the start of the 2000-01 season to score 100.

Ten of Walter’s points came in the fourth quarter, while Daum scored six fourth-quarter points and 13 in the second half.

Cole Byers chipped in 12 points and Aiden Hartle nine for the Wolves.

Dom Allegretto and Jack Benninger each added 11 points for the Elkers.

BRADFORD, Pa. – Cam Stelene knocked down 12 shots, including a 3-pointer, on his way to a career-high 26 points to lead visiting Johnsonburg to a 56-40 win over Bradford.

Gabe Watts added 14 points in the win with John Douglass chipping in eight.

Alec Srock added 11 points and Ethan Kness 10 for the Cardinals.

March 1, 2021 D10 Hoops: Maplewood Girls Win a Pair; Franklin Boys Use Big Fourth Quarter to Edge Warren
March 1, 2021 D9 Girls’ Hoops: Selfridge Leads Clarion Comeback Win; Lauer Paces Keystone in Win Over Redbank Valley
We use cookies on our website to give you the most relevant experience by remembering your preferences and repeat visits. By clicking “Accept All”, you consent to the use of ALL the cookies. However, you may visit "Cookie Settings" to provide a controlled consent.
Cookie SettingsAccept All
Manage consent