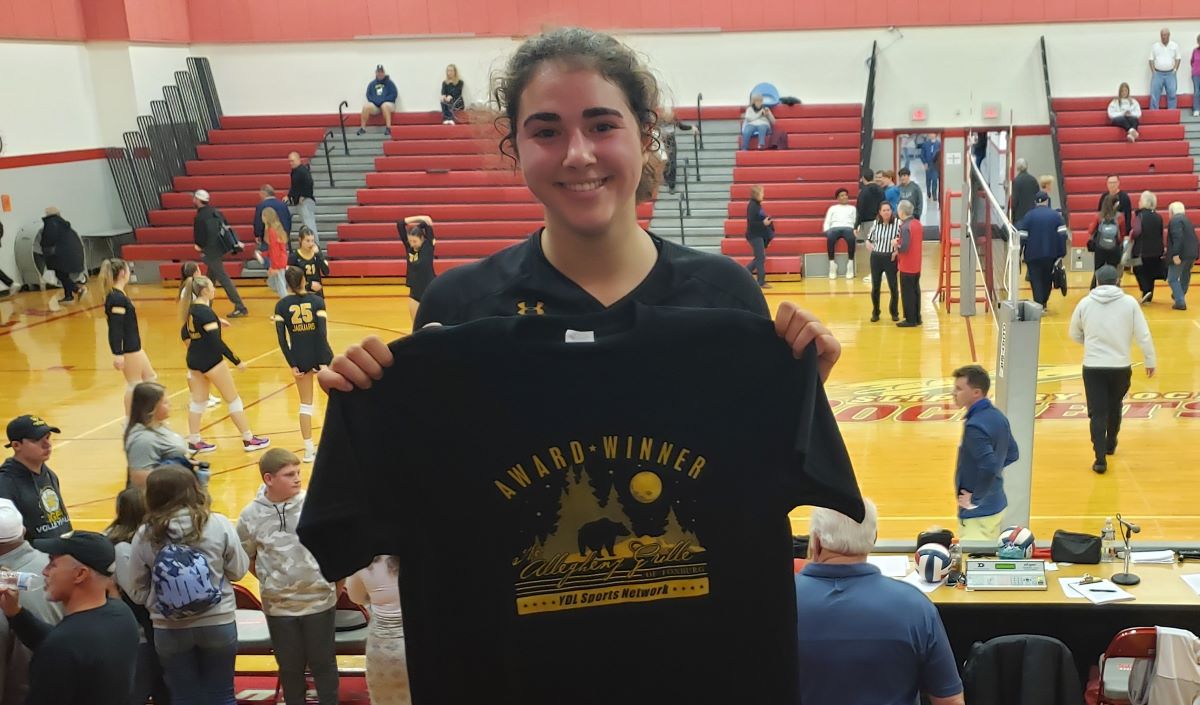 SLIPPERY ROCK, Pa. – Who knows what might have happened to Maplewood’s season if it wasn’t for McKenna Crawford’s serving in the first set of a 3-0 (25-15, 25-16, 25-20) win over Homer-Center in the PIAA Class 1A quarterfinals Saturday afternoon at Slippery Rock High School.

District 6 runner-up Homer-Center had controlled the better part of the first half of that opening set and led 13-10 following a tip by Ali Schmidt.

But a push kill by Bailey Varndell got the serve back to Crawford and the D10 champion Tigers, and senior Libero turned the match on a time.

Not only did she serve three aces during a set-changing 11-0 run, her other serves helped keep Homer-Center out of system and out of sorts.

“Coming into today, we knew we had to win points at the service line,” Maplewood head coach Sheila Bancroft said. “That was a very good team, one of the most solid offensive teams we’ve played this year. So, we had to get points back there. (McKenna’s) serve was on. She was very consistent. We backed it up with some defense. When you can get points in strings, it usually leads to good things.”

“It really is a booster for us, especially in our attitude, when we can get a serving run,” Thomas said. “It helps us kind of pick up our momentum and having more oompf on the floor, I guess.”

“I came out a little slow,” Thomas said. “But after I got an initial kill, it boosted my confidence a little bit. I kept going, and things were just going my way, I guess.”

Bancroft was pleased with how her senior star played.

“She was on,” Bancroft said. “And she needs to be on. It’s no secret. She comes in, and she is focused. She hit smart. She put some thunder behind it, too. At the same time, she moved the ball around and hit smart.”

Everyone involved with the Tigers’ program was happy for O’Hara, who had lost playing time in the playoffs not even seeing the court in Maplewood’s last two matches before earning her way back onto the court and making a difference in the quarterfinal victory.

“Savannah O’Hara has not played in the last few matches,” Bancroft said. “She got beat out. I pout a freshman in against Cochranton (in the D10 championship match) and went with a gut feeling. The last practices, Savannah has been working very hard and earned a position back. She is a team player. She never quits, and she knows she can better the team and she is going to help the team. She was determined to get her spot back.”

Bancroft was also pleased with Hunter’s play in the middle.

“We have to have a one-two punch,” Bancroft said. “We just can’t have Sadie. Elizabeth has come a long way. She keeps getting better and better. When she is one, it does back Sadie’s job a little bit easier.”

With the victory, Maplewood is back in the semifinals for the first time since winning the 1A PIAA title in 2017.

“I think it is pretty awesome that we got past the quarterfinals this year,” Thomas, who was named the Allegheny Grille of Foxburg Player of the Match, said.

Bancroft said getting past the quarterfinals in every tournament has been a team motto this season.

“It’s exciting,” Bancroft said. “It’s another day of volleyball. You never want your season to end. We are very excited.”

Maplewood will take on District 9 champion Oswayo Valley in the semifinals Tuesday at a site and time to be determined.

NOTES: In addition to her great serving, Crawford added 18 digs in the victory. Varndell ran the offense with 31 set assists … Meegan Williams paced Homer-Center with eight kills with Ashlyn Kerr adding seven and Alaina Fabin five kills and an ace … Homer-Center’s assistant coach is Clarion High School graduate Dorothy Kalinowski, who is a senior at IUP. Kalinowski is in her first year as an assistant coach and said she enjoyed coaching this year.

ST. MARYS, Pa. – To go where no Green Wave has gone before.

Oswayo Valley advanced to the PIAA semifinals for the first time in school history with a 3-0 (25-17, 25-20, 25-22) win over District 5 champion Conemaugh Township at St. Marys High School.

“It’s been a great ride,” Oswayo Valley head coach Ken Kellert said. “I am so proud of the hard work these girls put in during practice. They want to go all the way. The semifinals is just another step closer.”

The Green Wave, as they have done so much in this already historic season that has included the squad’s first-ever D9 title, relied on the big three of Avaree Kellert, Olivia Cook, and Praylan Perkins to lead the way.

Those three combined for 40 kills and 36 digs in the victory led by Cook with 15 kills, nine digs, two blocks, and a set assist.

“Our three big hitters, Avaree, Lou, and Praylan, did outstanding with putting the ball away and also dug some hard kills from the opposing team.”

In the opening set, the Green Wave build a 19-9 lead then held off a Conemaugh Township comeback that saw the Indians get within four, 19-15.

The second set saw Oswayo Valley use a 4-0 spurt early in the set to build an 11-6 lead and then kept the lead in that range the rest of the way.

Conemaugh Township had its best chance at victory in set three when the Indians took a 16-14 lead only to see the Green Wave answer with a 6-2 run to go up 20-18 on the way to the 25-22 victory.

“These girls all get along so well,” Kellert said. “They are like a close-knit family. They truly love one another.”

“We were just inconsistent tonight,” Conneaut head coach Christine Krankota said. “At this stage of the game, when there are only eight left in the state, you can’t play inconsistently.”

The biggest issue for the Eagles was passing, and that led to an uncharacteristic 26 errors against Conneaut.

“We didn’t have our best performance passing either in serve receive or defensively,” Krankota said. “Because of that, we weren’t able to run our offense, and we didn’t put a whole lot of pressure on them defensively. You have to do that. Thomas Jefferson is a great team. They played very well. They are very balanced. They played great defense, and they have a good offense. It wasn’t in the cards for us tonight, unfortunately.”

Krankota said the Jaguars weren’t doing anything special to keep Conneaut out of system.

“They were consistent,” Krankota said. “They didn’t make a whole lot of mistakes. They made us earn our points. They capitalized when we made mistakes.”

Things actually started out very well for Conneaut, as the Eagles took an 11-3 lead in the first set following a kill by Sylvia Prebor.

But that was the high-water mark in the set for Conneaut, as a 16-3 run by Thomas Jefferson that included a pair of kills by Eliah Lippincott and two aces from Alexa Albin turned the set around in a hurry.

“We had a great start in the first set,” Karnkota said. “We fell off, and we went through a bad stretch of passing and we weren’t able to overcome that.”

Conneaut did overcome the first set to take the second set, 25-22 behind four kills from Kaylee Mattera and three from Prebor.

“We put together a consistent performance in the second set,” Krankota said.

But the passing issues returned in the final two sets for the Eagles, who weren’t really close in either with only a late 6-0 run after falling behind 22-12 in the fourth set making the set seem closer.

“It’s volleyball,” Krankota said. “It’s a sport. They are high school athletes. You see professional athletes who are paid millions of dollars who are inconsistent at times as well. It is part of the game.”

Mattera, who announced earlier in the week that she would play volleyball at D2 Seton Hill, finished with 19 kills and nine digs in her final high school match, while Prebor added 11 kills and four blocks. Paris Karastury had 19 digs, Mackenzie Wensel chipped in seven digs, three kills, and three aces, and Ashley Crabb and Kenady Oates each had seven digs. Payten Karastury ran the offense with 32 set assists and seven digs.

TJ will play WPIAL champion North Catholic in the semifinals Tuesday at a site and time to be announced.

Walker, GM Blank Clearfield to Advance to PIAA Girls’ Soccer Semifinals
PIAA Releases Semifinal Sites for Volleyball, Soccer Tuesday
This website or its third-party tools process personal data.In case of sale of your personal information, you may opt out by using the link Do not sell my personal information.
×
Manage consent