Maplewood, Cochranton to Meet for D10 1A Volleyball Title After Semifinal Wins Tuesday 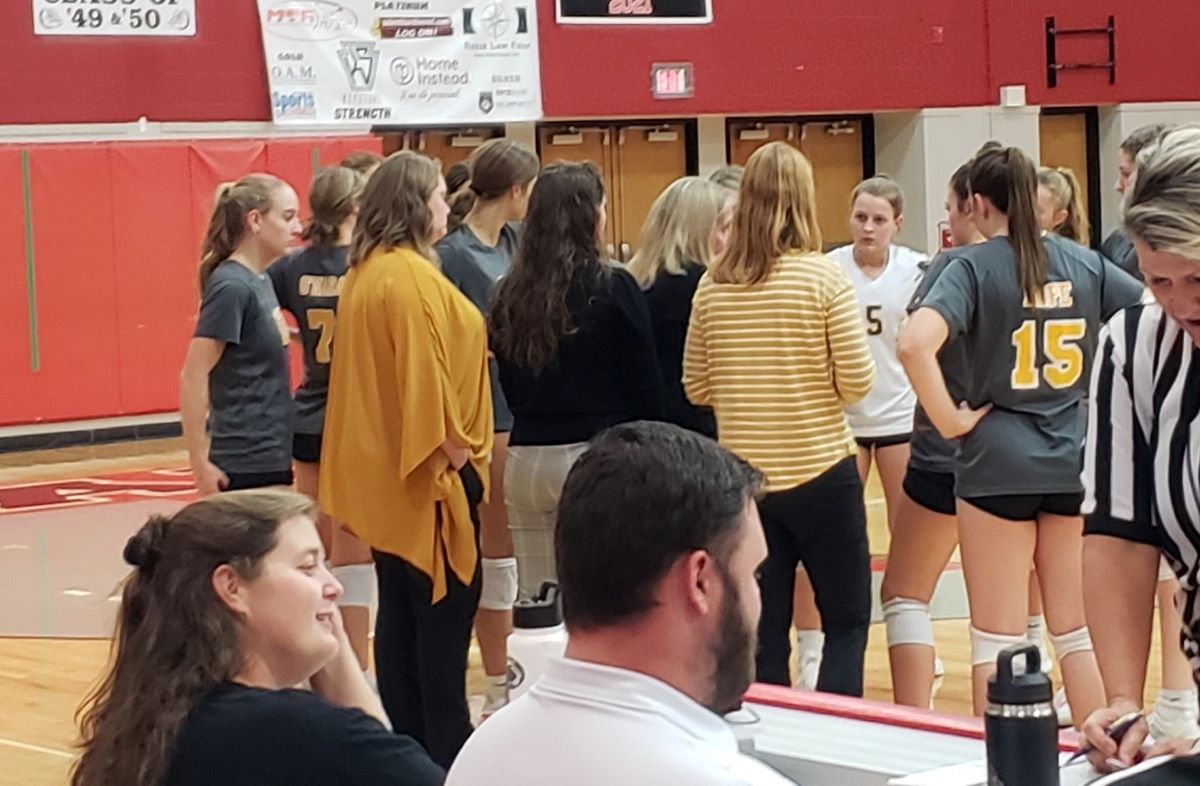 Maplewood huddles during its win over Lakeview Tuesday

MEADVILLE, Pa. – It will be Maplewood and Cochranton for all the marbles in District 10 Class 1A volleyball after both teams swept their way to victory in the D10 semifinals Tuesday night at Meadville High School.

Those wins set up a rubber match Saturday at a site and time to be announced between the two perennial District 10 powerhouse programs located 15 miles apart.

“It makes (Saturday) so much more exciting and so much more nerve-racking knowing one of our biggest opponents of the year we will be facing on Saturday,” Cochranton star Devyn Sokol said. “It is a do or die.”

Sadie Thomas was a major reason Maplewood won its match.

The Tiger senior had a monster night with 25 kills while hitting a .435 hitting percentage. She made just five hitting errors on the night and also added two aces and five digs.

“I thought I started off a little slow,” Thomas said. “I think throughout the match I progressively got more comfortable and just got the feeling of what worked and struck with it. I think through the game, I started getting better swings.”

“It’s a good thing Sadie showed up to play tonight,” Bancroft said. “She had a phenomenal game. She passed pretty well, handled the ball. She had a solid game. We live and die on her. She did well.”

In two of the three sets, Lakeview was able to hang around for a bit before Maplewood’s superior skill took over.

In the first set, the Sailors led 9-8 following an ace from Emma Marstellar only to see the Tigers go on an 8-2 run to take a 16-11 lead thanks in part to a pair of kills and an ace from Madison O’Hara.

Lakeview got back within one, 16-15 thanks to two Maplewood hitting errors, the Tigers had nine in the set, and two aces from Priscilla Cole.

But three Lakeview errors and an ace from McKenna Crawford pushed the advantage back to five and it never fell below four the rest of the way.

In the third set, Lakeview led 10-6 early and was tied at 15 before a quick 4-0 spurt by Maplewood which included a kill from Megan Woge helped push the Tigers to victory.

“We are moving on,” Bancroft said. “We are playing for another day, and that’s important. But we need to play better ball on Saturday. I thought we came out really rough. We had like 11 hitting errors in the first set. We can’t afford to do that. Hopefully, we get that out of our system. But we recovered and then started playing better ball in sets two and three.”

“I think this set just wasn’t our time for serving,” Thomas said. “Luckily we pulled it out. We have good servers. We just have to have that ability to keep them back there to get the serves.”

Bancroft said some of the mistakes came about because Maplewood is an aggressive serving team.

“We take chances sometimes,” Bancroft said. “Sometimes, that comes back to get us.”

In between those two sets, Maplewood looked like a championship-caliber team in the second set racing to a 13-4 lead and then using a 12-3 run to put the set away after Lakeview had closed the gap to 13-8.

The Tigers were able to keep the Sailors out of system most of the night helping lead the three-set victory.

“I think that is a key part of the game for any team no matter who you are playing not just this specific match,” Thomas said. “I think we did well with that.”

“They had a couple of weak spots on the serve receive,” Bancroft said. “We thought if we could keep them out of system that was going to help.”

Elizabeth Hunter added eight kills for Maplewood, including five in the third set.

“She plays well as the match goes on,” Bancroft said. “But we need to find that in set one. She can’t afford to have a slow start when we play on Saturday. We need to get her started quicker.”

Also for the Tigers, O’Hara had six kills and four aces with Woge adding four kills and three aces. Crawford had 15 digs, and Maggie Mans chipped in seven digs.

Bailey Varndell ran the offense with 42 set assists and completed a double-double with 10 digs.

Cole paced Lakeview with two kills, two aces, and a block with Riley Sample adding two aces and two kills. Marstellar had three aces and Zoe Proper and Madison Doyle each chipped in two kills. Elsa Cole had seven digs and an ace.

Sokol was a big reason Cochranton finds itself back in a position to win a second straight D10 1A crown and its fourth in five years.

“It means so much (getting back to the title game),” Sokol said. “When we make it to districts, it is such a big thing for us. Being able to continue to win and win and keep striving to make it further is probably the best feeling that our team could have.”

The 5-foot-11-inch senior was all over the front row with nine kills and five blocks. That included six kills and a block in the first set.

“It gives everybody a lot of confidence that she is going to be on her game,” Cochranton head coach Marci Malliard said.

“(We didn’t) want to let anyone take our win from us,” Sokol said. “Basically, I wanted it as bad as my team did. We worked our butts off, and we got it.”

Malliard was also happy with how the other players played when Sokol was not part of the rotation.

“It gives them a lot of confidence when she is out sitting on the bench that they can get the job done too,” Malliard said. “Those are important rotations. She can be the team on her own. It’s important that everybody else steps up and has kills around (Devyn).”

Runs in the middle of each set helped Cochranton breeze to the victory.

In the first set, the Cardinals were tied at eight before going on a 9-2 run that featured three kills and a block from Sokol.

But the Cardinals went on a 7-0 run that included strong serving from Ella Gallo, who had four aces, to push the lead to 23-15.

In the third set, Cochranton held an 11-9 lead following a kill by West Middlesex’s Kennedy Beatty before a 10-4 run all but put the set away.

A pair of blocks by Sokol, kills from Hoffman and Needler, and an ace from Taytum Jackson were key to the run.

Malliard thought the Cardinals’ passing was a key to the victory.