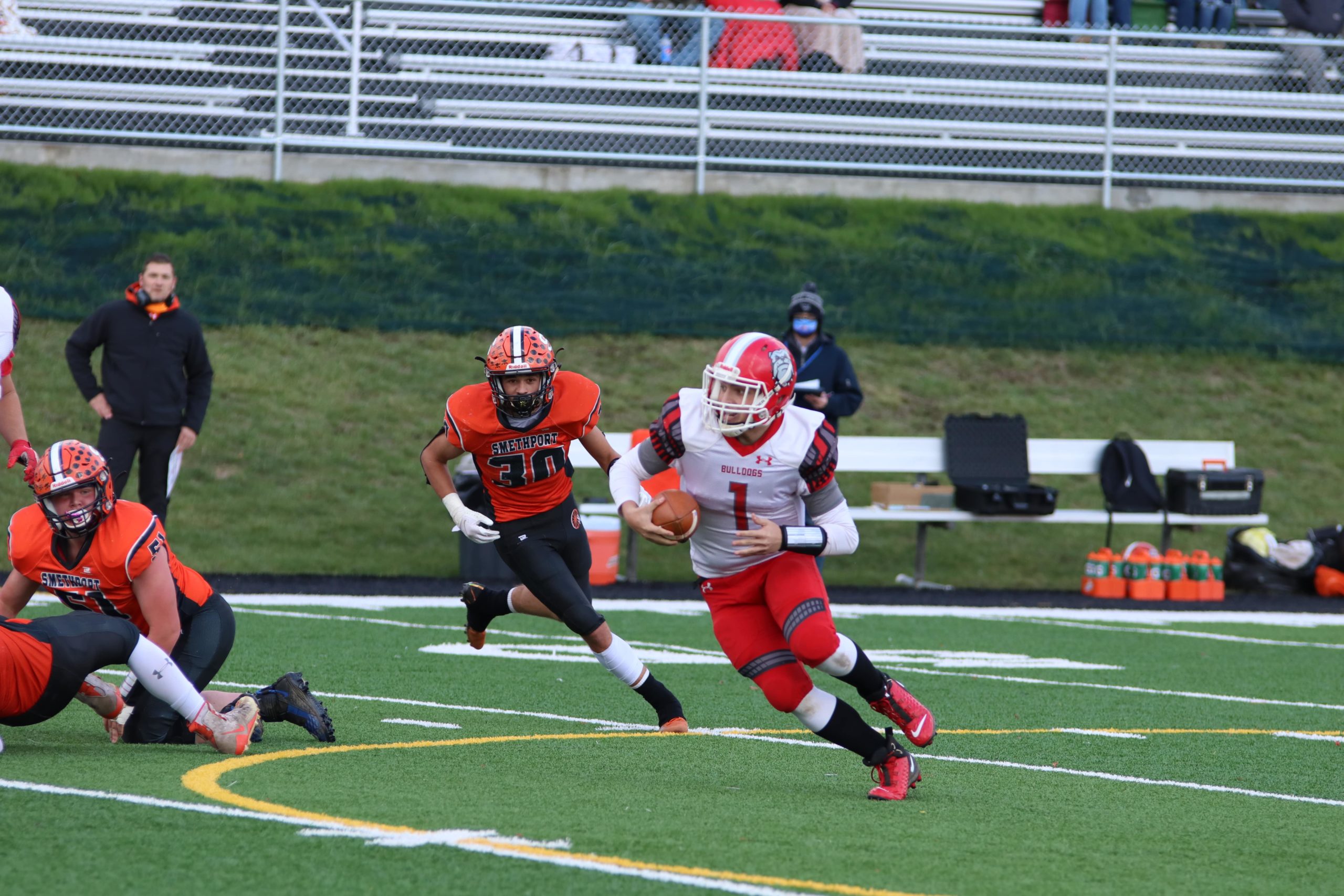 (Photo by Jared Bakaysa, see more of Jared's work here. Redbank Valley quarterback Gunner Mangiantini runs for a gain during the District 9 Class 1A championship game against Smethport at Varischetti Field in Brockway Saturday, Oct. 31, 2020. Mangiantini accounted for all three Bulldogs touchdowns in a 20-6 win over the Hubbers.)

The Bulldogs led the 2019 District 9 Class 1A title game with 11 minutes to go in the fourth quarter, but let the lead slip away. Determined not to let it happen again, the Bulldogs forced a turnover on downs with Smethport inside the 10 to preserve a 20-6 advantage and were able to run the clock out late Saturday at Varischetti Field in Brockway to claim their first District 9 title since 1996.

“Last year, these guys came short,” RV coach Blane Gold said. “This year they finished. We felt that if we could get three scores, we were going to win the game.”

Smethport had all the momentum early. After forcing a three-and-out, the Hubbers marched 52 yards in eight plays. Noah Lent capped the drive with a 10-yard pass to Brandon Higley to put Smethport up 6-0 with just under six minutes to go in the first quarter.

The Hubbers picked off Cam Wagner’s pass on the third play of the ensuing possession to take over at their own 40.

Two plays later, Aiden Ortz intercepted Lent to give the ball back to the Bulldogs and Gunner Mangiantini took control.

“We’ve prided ourselves on defense all year,” Gold said.

He picked up eight yards on a first down run, then connected with Marquese Gardlock for a short gain. Facing a third-and-eight, Mangiantini found Chris Marshall on a post. Marshall escaped a tackle and dove across the goal line for a 25-yard touchdown. Landon Pence hit the extra point to give RV a 7-6 lead late in the first.

“The last two games he’s played in, we’ve sat him, we gone with our backup quarterback to win games,” Gold said. “For him to show up and play the best game he’s had all season. I can’t say enough about that kid.”

After a punt, the Bulldogs got the ground game going. First, with Ray Shreckengost. Shreckengost picked up 21 yards on the first three plays of the drive, then another five after a short pass play.

“They were hurting us with that trap play early in the game,” Smethport coach Adam Jack said. “We couldn’t seem to get that stopped.”

Mangiantini found Gardlock for a 39-yard completion to put Redbank in the red zone. Mangiantini finished the drive with a 4-yard touchdown run to stretch the lead to 14-6 midway through the second quarter.

“We challenged the offensive line,” Gold said. “We felt that if we could run the ball we were going to be pretty successful.”

Redbank closed out the scoring late in the first half. A pair of long Shreckengost runs put the Bulldogs at the Smethport 22. A defensive pass interference penalty moved them to the 11 and Mangiantini hit Marshall from eight yards out to finish the drive. Wagner’s pass to Marshall on the 2-point conversion attempt fell incomplete, but the Bulldogs had a 20-6 lead at the half.

“Things didn’t go our way there in the second quarter really at all, and we weren’t able to overcome that,” Jack said.

Smethport looked as though it would start the second half the same way it started the first. The Hubbers took the ball at their own 37 and methodically moved to the Bulldogs’ 37, but Lent’s pass to Ryli Burrit on fourth-and-eight fell incomplete and Smethport turned it over on downs.

The Hubbers got the ball back on a fumble recovery early in the fourth quarter and quickly moved into the red zone. On first down from the Redbank 41, Lent sprinted 24 yards down the sideline to put Smethport in scoring position. A 10-yard pass to Lucas Fowler gave the Hubbers a first-and-goal from the 3.

The Bulldogs’ defense dug its heels in as they had two tackles for loss and forced a pair of incompletions to give the ball back to their offense with 6:53 to go. The offense did its job as Smethport never got the ball back.

Mangiantini was 9-15 passing for 102 yards with two touchdowns and an interception, and he added 51 yards and a score on eight carries. Shreckengost picked up 88 yards on 14 carries. Marshall and Gardlock each had three receptions. Gardlock went for 47 yards, while Marshall had 34 yards and two touchdowns.

After a brilliant passing performance in the semifinals last week, Lent was held to just five completions on 14 attempts against the Bulldogs. He had 52 yards and a touchdown through the air, and added 58 yards on the ground.

Rewatch the Instant Classic Between Eisenhower and West Middlesex Won by Eisenhower in Double OT
High Five: Wilmington Holds Off Farrell in 2A Title Game For Fifth Straight D-10 Championship
This website or its third-party tools process personal data.In case of sale of your personal information, you may opt out by using the link Do not sell my personal information.
×
Manage consent