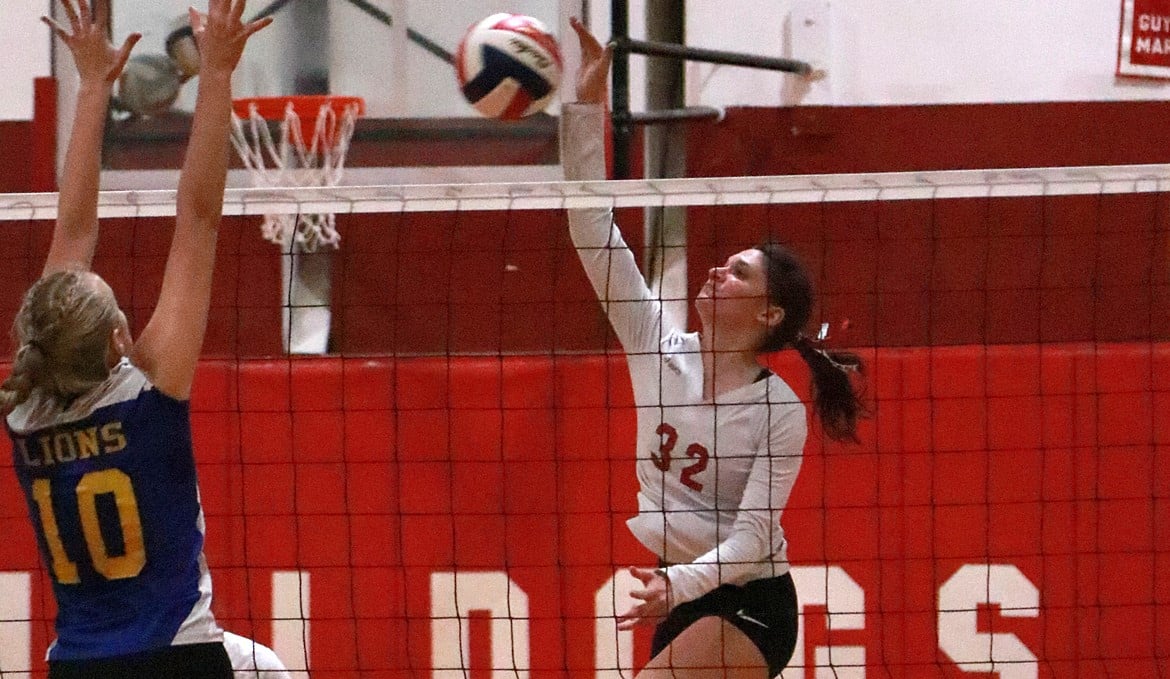 Montana Hetrick of Redbank Valley hits over Belle Bosch of Chestnut Ridge for one of her 28 kills Tuesday night. Photo by Mike Maslar

That is how long it had been since a District 9 Class 2A school had reached the PIAA quarterfinals – 1998 when Kane did so in a pool-play system.

But that all changed Tuesday night in New Bethlehem, as Montana Hetrick and Alivia Huffman put Redbank Valley on their backs and carried the District 9 champion Lady Bulldogs to a 3-1 (28-26, 22-25, 25-20, 25-21) win over District 5 champion Chestnut Ridge.

“Wow, I didn’t know that,” Redbank Valley head coach Matt Darr said. “I know we’ve been in the states five times (including this season) and this is our first win. But, I didn’t know it’s been that long for 2A. There are a lot of really good teams in not only District 9 but the KSAC. That really proved it tonight. I think we can play with some of the better districts in the state.”

Not only had District 9 not had a 2A team advance to the quarterfinals since 1998 – when there were only two classifications – District 9 hadn’t even been competitive in recent memory having lost 19 straight SETS in PIAA first-round play since Bradford won the fourth set in a 3-1 loss to Fort LeBoeuf in 2013. And since 2008 – with the exception of 2010 when the first round was pool play and 2012 when D9 didn’t even have a representative, District 9 teams had gone just 2-30 in set play in PIAA 2A first-round action.

“I am so excited,” Hetrick said. “I am very proud to be part of such a family.”

Hetrick played a huge role in the victory with 28 kills and two aces including seven kills in the first set, a come-from-behind Lady Bulldogs victory, eight in the crucial third set, and nine in the fourth set, including five in a row at midset that helped Redbank Valley open up what turned out to be an insurmountable lead.

“Our middle struggled tonight,” Darr said. “Now, a lot of that is because No. 10 (Belle Bosh), their sophomore, is the real deal. She gave us fits, so we had to go outside, outside mostly. But for someone to have 28 kills in a four-set match, that’s pretty impressive.”

Hetrick was front-and-center during Redbank Valley’s rally from a 21-19 deficit in the first set – a set that saw the Lady Bulldogs face three set points (24-23, 25-24, 26-25) before winning the final three points on a kill by Brianna Minich and then two kills from Hetrick.

Watch Hetrick’s kill to close out the first set

Four of Hetrick’s kills and one of her aces came from points 18 on for Redbank Valley.

“I was kind of getting frustrated at myself because I couldn’t get good hits from the sets, so I just kind of lobbed them over,” Hetrick said. “I just tried to pound them and get them in the holes.”

Hetrick’s second set was ok – with four kills – but the Lady Bulldogs committed too many errors – 13 – and lost a 15-11 lead in taking the loss.

“Even in the first set, I thought we gave them too many points,” Darr said. “We had too many missed serves, too many hitting errors. That carried into the second set. But we knew if we cleaned it up, we should be ok. And Montana and Alivia really brought us down the stretch.”

Hetrick got the Lady Bulldogs going quickly in that third set with four of her eight kills in the set coming in the first seven points helping Redbank Valley to an early 7-4 lead.

But the set got close, and the Bulldogs were down, 19-17, following a Bosch block – one of six solo and one tandem blocks she had in the match – and then again at 2-19 when Huffman stepped up.

The sophomore had been limited to six kills through the first 2 ⅔ sets but recorded five kills down the stretch in Set Three to score five of Redbank Valley’s last six points, as the Lady Bulldogs used a 7-0 finishing kick to take the crucial set and the 2-1 set lead.

Huffman finished the night with 16 kills, including 10 over the final two sets.

In the fourth set, Redbank Valley found itself trailing 6-5 following a Bosch kill – Bosch had 18 kills, including seven in the fourth set alone, to go with her seven total blocks.

But kills by Ryley Pago and Huffman followed by an ace Hetrick put Redbank Valley ahead, 8-6.

Chestnut Ridge, the District 5 champion, rallied and got within one a couple of times including at 10-9 on a kill by Laura Albright.

But then Hetrick took over with five straight kills to give the Lady Bulldogs a 16-9 advantage.

“Yes,” Hetrick said when asked if she thought she found a rhythm.

Chestnut Ridge had a run left in it and closed with two, 18-16, thanks in large part to Bosch, who had two kills and two blocks – one the tandem block with Alaina Lafferty.

But Pago delivered a huge kill in the middle followed by a hitting error on Chandra Sell that pushed the Redbank Valley lead back to four, 20-16.

The Lions had one final push getting within three, 23-20, on an ace by Riley Frankenberry before kills by Minich and Hetrick sent the Lady Bulldogs into celebration.

Redbank Valley will take on WPIAL champion North Catholic at noon Saturday, Nov. 14, at North Catholic. The Trojans are the No. 1 ranked team in the state in Class 2A by the Pennsylvania Volleyball Coaches Association.

Nov. 10, 2020 PIAA Volleyball and Soccer Playoff Scores
Gritty Gremlins: King’s Late Goal Sends Karns City Past Bedford, Into PIAA Quarterfinals
This website or its third-party tools process personal data.In case of sale of your personal information, you may opt out by using the link Do not sell my personal information.
×
Manage consent