Looking for a Bite of Chocolate, Redbank Valley Faces Bishop Canevin in PIAA 1A Semifinals Powered by Subway in New Bethlehem 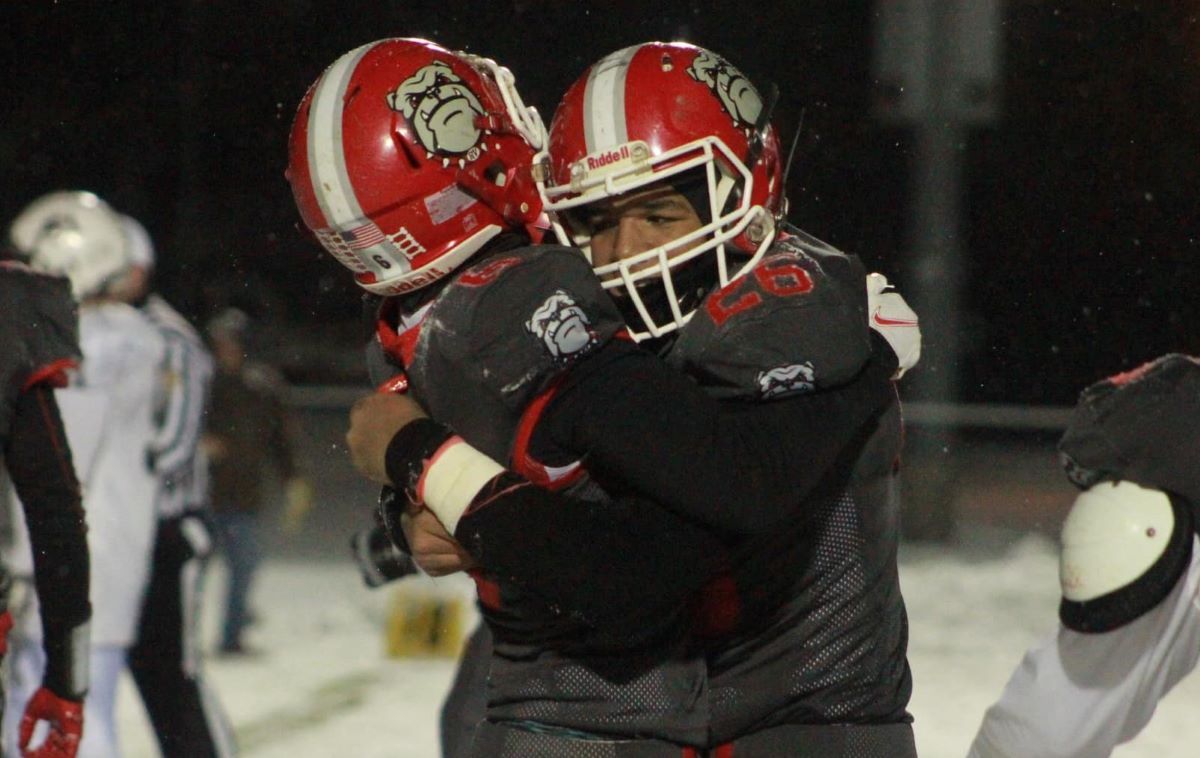 It’s rare, but here are the Redbank Valley Bulldogs in the PIAA Class 1A semifinals in a matchup against WPIAL champion Bishop Canevin Friday night at North Hills High School’s Martorelli Stadium at 7 p.m.

The last time a D9 team got this far in the bracket was 2013 when the Clarion Bobcats lost to WPIAL champion North Catholic, 39-12.

The last time the 12-1 Bulldogs got this far? Never. Canevin (13-1) hasn’t been here in a long time. The Crusaders won their first WPIAL title since 1990 when they reached the Class 2A state final and lost to Hanover.

And to get past this point for any D9 team, it’s a rare accomplishment. Only two D9 teams — Smethport in 1992 and Keystone in 1989 — won semifinal games before losing in the state finals.

Canevin’s emergence as a state power is a good story, considering it was 1-9 two years ago. Head coach Rich Johnson has rebuilt the program was 5-3 last year in his first season on the Crusaders sideline.

The Crusaders are young, featuring just five seniors on the roster. In the WPIAL playoffs when No. 9 seed Our Lady of Sacred Heart upset top-seeded Clairton in the quarterfinals, the bracket broke open and it was the No. 3-seeded Crusaders who took advantage with wins over Burgettstown (49-6), Shenango (42-14), and No. 2 seed Cornell (24-7) before routing and ending OLSH’s Cinderella run in the final, 42-7, last Friday at Heinz Field.

Redbank Valley hasn’t lost since its season-opener at Keystone, so head coach Blane Gold’s squad has won 12 straight games. The Bulldogs have met some postseason challenges the past few weeks — trailing 14-0 out of the gate against Port Allegany in the D9 semifinals before responding with a 35-14 win and breaking a fourth-quarter tie with Union/A-C Valley and winning 28-21.

Last week, the Bulldogs trailed for the first time this year at halftime against Northern Bedford before taking the lead again in the fourth quarter and holding off the D5 Panthers with a defensive stand in the closing minutes.

Brenden “Boo” Shreckengost came up big when he was definitely needed, rushing for a career-high 137 yards on 20 carries. His 47-yard touchdown run nine seconds into the fourth put the Bulldogs up for good while his 79-yard kick return for a score answered Northern Bedford’s game-opening touchdown drive.

While a starter at linebacker on defense, Shreckengost went into the game with 55 yards rushing on 22 carries.

Shreckengost became the feature back due to the loss of team’s leading rusher and two-way starter Ray Shreckengost, who was out for disciplinary reasons. He’s no longer with the team.

“In accordance with school district policy, Ray has been dismissed from the team,” Gold said in a statement earlier this week. “While we’re disappointed in the actions of Ray that led to his dismissal, we are committed to helping him learn and grow from the experience.”

So it’ll be the 5-foot-3, 135-pound Brenden Shreckengost who’ll likely be a key to the Bulldogs’ offense Friday night.

In last week’s win, senior Gunner Mangiantini (11-for-21, 196 yards, 3 TDs) entered the game for an injured Bain — he returned later — and tossed a game-tying 31-yard TD pass to Chris Marshall in the third quarter.

Marshall (36-569, 11 TDs) had a stellar game for the Bulldogs against Northern Bedford, catching the perfectly placed pass from Mangiantini while finishing with 11 tackles on defense which included a 6-yard tackle for a loss on a deep Panthers drive into Bulldogs territory late in the third quarter.

Marquese Gardlock (25-445, 4 TDs), Tate Minich (38-514, 7 TDs) and Aiden Ortz (21-267, 4 TDs) are the other top receiving targets for the Bulldogs. Gardlock had two big plays on defense, intercepting two passes against Northern Bedford, both in Bulldogs’ territory.

Defensively, the Bulldogs have the chore of facing a nearly perfectly statistically balanced Crusaders offense that averages 313 yards — 157 passing, 156 rushing — per game.

Linebacker Zeldon Fisher, who had 14 tackles and the big tackle for a loss on fourth down inside the 10 in the closing seconds against Northern Bedford, leads the Bulldogs with 91 tackles, or 7 stops per game.

Brenden Shreckengost (5.2), Joe Mansfield (5.1) and Brandon Ross (4.5) are the other top tacklers per game. Mansfield has 9 1/2 sacks while Ross is second with 5 1/5. Gardlock and Ashton Kahle share the team lead with four interceptions.

Cross is a dual-threat QB as his 471 yards on 59 carries ranks second on the team behind sophomore Marquis Carter (101-568) in rushing yardage and 12 TDs.

Juniors Lasae Lacks (43-841) and Xavier Nelson (37-817) are the big threats at receiver. Those teams each have scored 14 TDs. Last week, Nelson, at 5-foot-7 and 169 pounds, caught two TD passes and ran back an interception for another score. Freshman Jayden Lindsey (16-219) is another receiving option.

2021 District 9 and District 10 Week 15 Football Predictions
Family Affair: Motivated Farrell Football Team Built on Community, Togetherness
This website or its third-party tools process personal data.In case of sale of your personal information, you may opt out by using the link Do not sell my personal information.
×
Manage consent