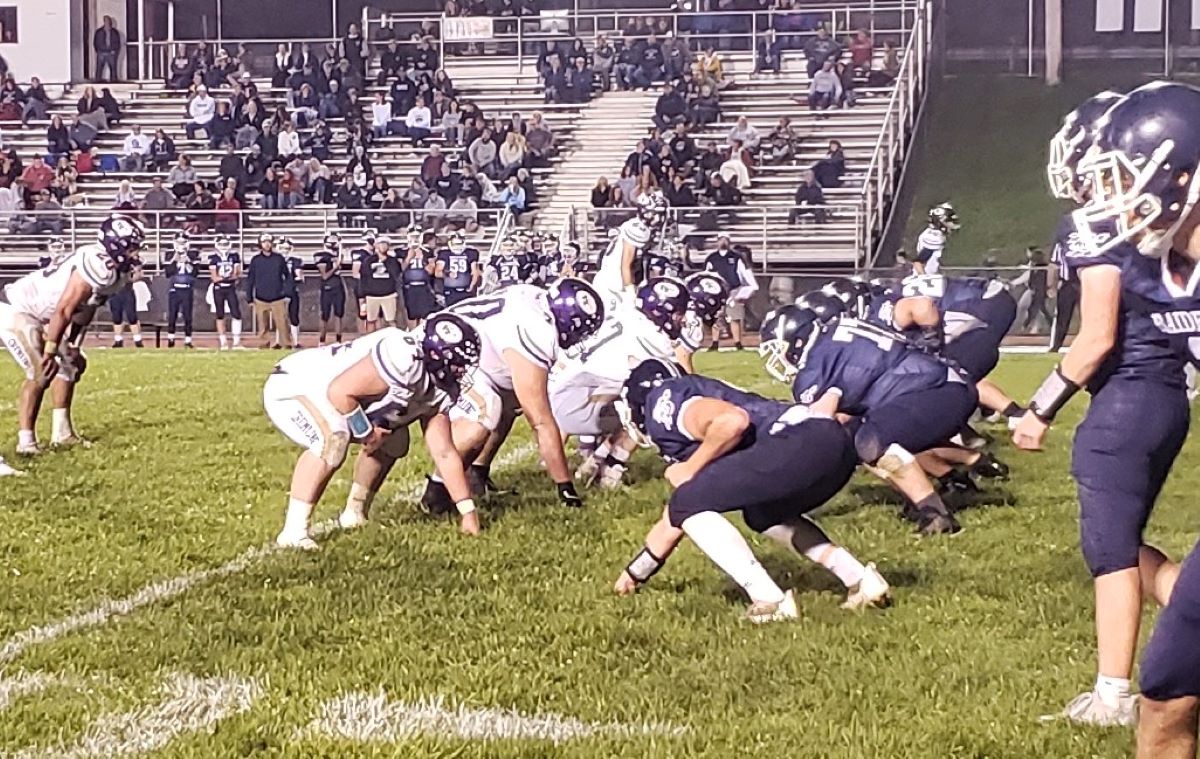 BROOKVILLE, Pa. – They aren’t names you hear every day – Aaron Taylor, TJ Vlassich, Josh Griffiths, Lucas Wright, and Austin Brown – but they should be.

Those were the starting offensive lineman for Karns City Friday night when the Gremlins traveled to Brookville to face the Raiders in a battle of a pair of 4-0 teams.

And they were the reason Karns City mauled its way to a 41-7 win that included 306 yards on the ground and 398 total yards of offense.

“Our offensive line stepped up big tonight,” Karns City head coach Joe Sherwin said. “These last few weeks we have shuffled guys in and out. Like Austin Brown. A guy like Austin Brown has played tight end or he has played tackle. We shuffle the guys around, but they still do an awesome job in there. Hats off to them.”

The line paved the way for Luke Garing to rush for 106 yards and three touchdowns on 16 carries and Jayce Anderson to add 91 yards on 12 carries. Eric Booher and Cooper Croyle each added 46 yards and a rushing touchdown as well for the Gremlins, who once again used six different guys to carry the ball 46 times.

“That’s our thing,” Sherwin said. “We want to keep them guessing as to who is getting the ball. Eric had some nice runs and our flankers had some big runs in key moments as well. We want to spread the ball around and make it difficult for the defense.”

With the running game working, Karns City was able to do two things in the second half to keep Brookville at bay.

First and most importantly, the Gremlins added to the lead outscoring the Raiders 27-7 after halftime including the first 20 points of the half.

And secondly, Karns City kept the ball away from Brookville out possessing the Raiders 15:13 to 8:47.

“We want to control the ball,” Sherwin said. “That is one of our things. We want to have a greater time of possession than the other team. If that happens, it’s not all the time you are going to win, but a large majority of the time you’re going to be successful. That is what we are trying to do.”

Brookville actually controlled the ball longer in the first half than Karns City thanks to a pair of five-plus-minute drive, but the Raiders weren’t able to finish either of them stalling at the Karns City 39 on the game’s first drive and at the Gremlins’ 19-yard line on their final drive of the first half.

Karns City had a couple of long drives end without points as well, as the Gremlins missed a field goal on their opening drive and then watched a nearly six-minute drive to start the second half end in a turnover on downs at the Brookville 31-yard line after they had reached the Raiders’ 24.

But by the time the second half’s opening drive stalled, Karns City led 14-0 thanks to second-quarter scoring runs from Garing (5 yards) and Booher (13 yards).

Croyle then made it 21-0 late in the third quarter with an 8-yard scoring run before a Garing interception of a Charlie Krug pass set up a bulldozing 14-yard scoring run by Garing 2:16 seconds into the fourth quarter that put the game away at 28-0.

Garing then added a second 5-yard scoring run to make it 34-0 before Brookville put together a 61-yard scoring drive – a full 27% of the Raiders’ offense on the night – that ended in a 4-yard touchdown run by Braiden Davis, who ran for 30 of his 32 yards on the scoring drive while also catching an 11-yard pass on the drive.

Zach Kelly, though, returned the ensuing kickoff 76 yards for a score to put the finishing touches on the win.

Charlie Krug led Brookville’s rushing attack with 14 carries for 52 yards with many of those carries coming off scrambles. Krug was also 9 of 24 passing for 102 yards and an interception.

Brookville will try to get back on the winning patch next week when it hosts Moniteau, which is coming off its first win of the year, 44-38, over Bradford.

Karns City returns to action next week when it hosts St. Marys.

The win coupled with Ridgway’s 21-6 loss to DuBois puts the Gremlins in sole possession of first place in the D9 League Large School Division halfway through the season.

“Sure, this is where we want to be,” Sherwin said. “But as I told the guys, it is one step, it is one game. You know what happened to us last year when we played this game (Brookville won 44-0) and what happened later on in the playoffs (Karns City beat the Raiders, 16-14, for the D9 2A title). You never know what is going to happen in high school football. We are just going to continue to take it one game at a time. We can’t get too full of ourselves. It is still a long season. There is a lot of season left.”

Sept. 24 D10 Football: Meadville Takes Control of Region 5; Prep, Farrell Remain Unbeaten
Sept. 24, 2021 D9 FB: DuBois Stuns Ridgway; St. Marys Outlasts Clarion; Moniteau Gains 1st Win; Keystone Rallies
We use cookies on our website to give you the most relevant experience by remembering your preferences and repeat visits. By clicking “Accept All”, you consent to the use of ALL the cookies. However, you may visit "Cookie Settings" to provide a controlled consent.
Cookie SettingsAccept All
Manage consent