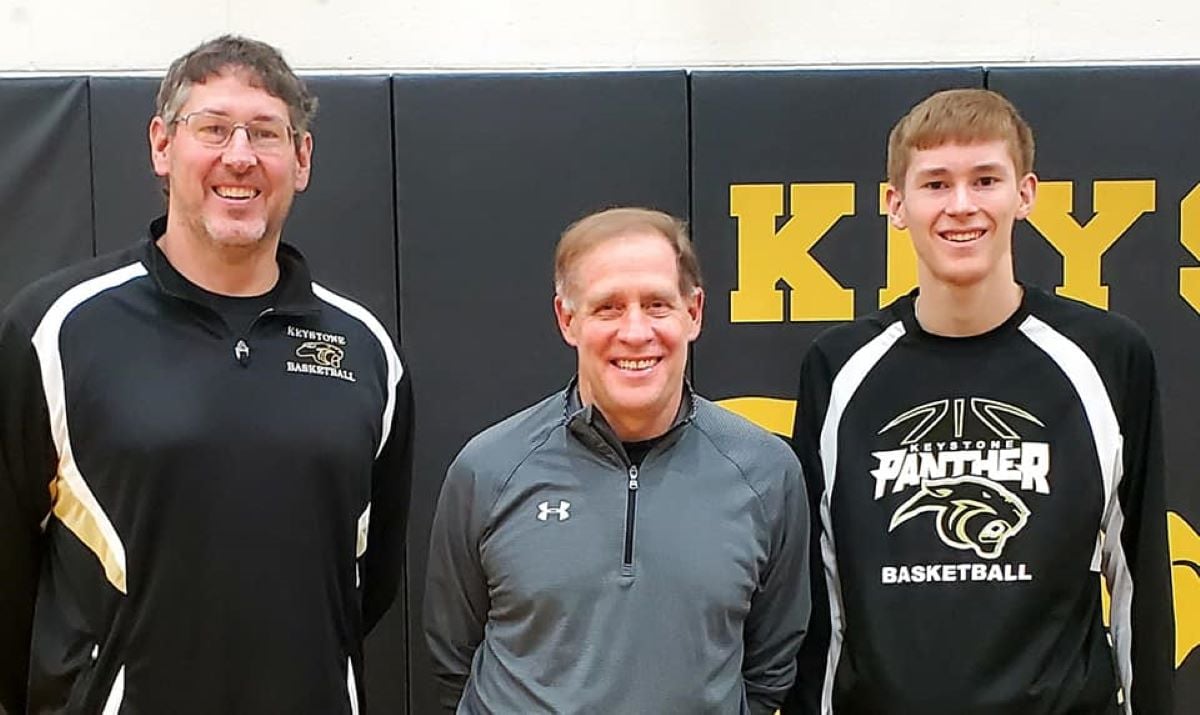 KNOX, Pa. – A lot of things have changed when it comes to the Keystone boys’ basketball program since 1985.

The 3-point line was added.

Heck, even the gym has changed with the Panthers moving down the hall to their current gym in the mid-1990s.

But one thing has stayed consistent throughout.

Heath is in his 37th year at the helm of the boys’ basketball program in Knox, and he has garnered 635 wins to go against 289 losses during that time.

There have been many special moments over the nearly four decades Heath has called the shots, and in this year like no other one of those moments takes place every time the Panthers hit the court.

Those moments involve Heath getting to sit on the bench next to former Keystone star Jason Say – who helped the Panthers win Heath’s first two District 9 titles in 1989 and 1990. But it isn’t just that Heath gets to coach with Say, who is a volunteer assistant, it’s that Heath gets to also coach Say’s son, Colin, a senior on this year’s team.

“It’s really neat,” Heath said. “Jason brings a lot to the table. He has been extremely helpful in our offseason program and has run an AAU team for us. From his own experience – Jason was a major player on a D3 National Title team where he played for a great coach who went on and had success at Bucknell in the NCAA Tournament – he brings a depth of knowledge with him. He adds to our mix and is not afraid to step in and make observations on his own. He has developed a good rapport with our players.”

Jason Say said any opportunity to coach with Heath would have been a great one, but it is made extra special getting to coach when Colin is playing.

“It means a lot to me,” Jason Say said. “COVID has been tough for everybody. We all knew there was a serious question as to whether or not we would be allowed to even have a season. I fought hard to see my kid get his senior year, not for me but for him.”

As the season approached, neither Heath nor Jason Say knew if Jason would even be able to coach this year.

“At first, the school board said just two coaches,” Jason Say said. “That was going to be Coach Heath and Coach Clark – longtime assistant coach Matt Clark. Then coach (Heath) called me back and said he could have one volunteer assistant coach. I knew that Ben Wolbert and Tyler Beichner had been there (as volunteers) longer than me. Coach Heath said he would let the three of us figure out who would be the volunteer assistant. But before I could even talk to them, they said there was no way they wouldn’t let me be there this year. That was awesome.”

Heath said while he let the three volunteers hash it out among themselves, he knew how it was going to turn out.

“All three of them are very capable,” Heath said. “I left it up to them because I knew how it was going to turn out. It was almost instantaneously they told Jason he would be the one. That speaks a lot to their character too. That was pretty special. I know Jason was concerned that with various COVID restrictions he wouldn’t be able to see Colin play at our away games. It gives him an opportunity to see him play, and he is a good coach. He does a lot with our big guys developing footwork. It has been a really good thing for the program.”

It probably shouldn’t come as a surprise that both Wolbert and Beichner stepped aside to allow Say to coach considering that is the kind of person Heath looks for in former player – and all three volunteers were former players of his – unselfish players who care about their teammates.

“(Heath) made it happen,” Jason Say said. “I am truly grateful to him and the other coaches who stepped aside so I could be there this year. I looked at Coach when we played Venango Catholic and told him I wanted to say thank you for letting me be a part of this crazy year. I can’t imagine not being here. He said it was a no brainer. That’s the type of guy he is.”

Colin Say wasn’t quite as enthusiastic at first about his dad joining Heath on the bench – in fact, even Jason Say said that he had once told Colin he wouldn’t coach him after sixth grade.

Perhaps one of the greatest traits for Heath is his ability to look at every player as their own player and no compare them to anyone else. That has made coaching Colin Say – and other kids of former players – easier, as Heath said he has no expectations that they will be like their fathers.

“Every kid is unique and brings their own talents to the table,” Heath said. “When I look at the kid, I don’t expect the same player as the father was. Most often, they are not (the same player). They are their own unique kind of player.”

Heath said when he looks at the older Say and the younger Say he sees players with different styles.

“Jason was so much more vocal of a player,” Heath said. “He was a little more out outgoing where Colin isn’t nearly as outgoing but is a quiet leader in his own way. Jason always had a remarkable touch around the basket, and Colin may even have a better touch around the basket. He has a knack for putting the ball in the hoop from different angles. He is a different kind of player than Jason. Jason was comfortable in the low post. Colin is more comfortable stepping away and operating in the mid-range area.”

Colin said he heard a lot about Coach Heath growing up.

“I heard he was a really good coach and that my dad was a part of his first two District 9 titles,” Colin Say said. “I guess I heard he was really good, and I hoped I would get to play for Coach Heath.”

Colin Say said the thing that separates Heath from most coaches is his ability to get the most out of his players.

“I feel like he has gotten the most out of me,” Colin Say said.

Jason Say said it amazes him how Heath has changed with the times.

“One of the things I realized that is amazing to me is that when I was a player an eraser or a piece of chalk could come flying at you and you wouldn’t take offense to it,” Jason Say said. “It’s different now. I want to coach in an old-school manner, but kids are different now. What is amazing to me is Coach Heath has been able to grow and get the most out of his kid. He knows when to push a kid and when not to push a kid. It amazes me how he has been able to evolve over the years. Every once in a while, he will raise his voice. But my junior year, we won a game by 30 points and weren’t allowed to talk on the way home. Coach Heath has been able to coach them no matter the generation and at the same time create great human beings and great men.”

Jason Say said when he played for Heath people didn’t look at him as this larger-than-life coach that some see today – although Heath would be embarrassed by that statement alone.

“Back then, he was so new (as a coach),” Jason Say said. “These kids today, they see over 600 wins, etc. But when we won those first two District 9 titles when I was in 10th and 11th grade, he didn’t have that reputation. And, you also didn’t have a lot of experience with other coaches like kids do today. But, man, you knew the guy was an amazing coach. You just knew he was. But I didn’t see him winning 600 games and all those District 9 titles. But there was no ands or buts about it. You knew he was a good coach and you loved him as a coach back then. But you couldn’t know something like how his career would go.”

Jason Say kept this clipping from the March 18, 1991, edition of the Oil City Derrick where Greg Heath presented him with the Clarion County League MVP Trophy. Submitted photo

If you asked Heath, he wouldn’t be able to tell you how many wins he has. To him, it’s about teaching the game he loves. And that is why he loves it when former players want to be involved with his program.

“It’s very gratifying,” Heath said. “I am happy that we were able to instill a love for the game of basketball within them. As a volunteer assistant, you are doing purely out of the love of the game. Basketball is a game I have always loved, and I am happy to be able to instill that in my players as well. Even if they are not coaching, they are active playing basketball in leagues. That makes me happy that they love the game as much as I do.”

Jason Say believes he is a lucky man that he not only got to play for Heath but now his son gets to play for him as well.

“I know a lot of coaches,” Say said. “And I know my kid is in the best hands of any coach he could be in high school basketball in Pennsylvania.

“The people in the Knox community love him. They know how fortunate we have been to have him for all these years. The community is so thankful to have a guy like that in their kids’ lives.”

D9and10Sports TV Interviews Slippery Rock’s Anna Kadlubek, the Rockets IUP-Bound 1,000-Point Scorer
District 9 and District 10 Basketball Schedule for Feb. 15, 2021
We use cookies on our website to give you the most relevant experience by remembering your preferences and repeat visits. By clicking “Accept All”, you consent to the use of ALL the cookies. However, you may visit "Cookie Settings" to provide a controlled consent.
Cookie SettingsAccept All
Manage consent