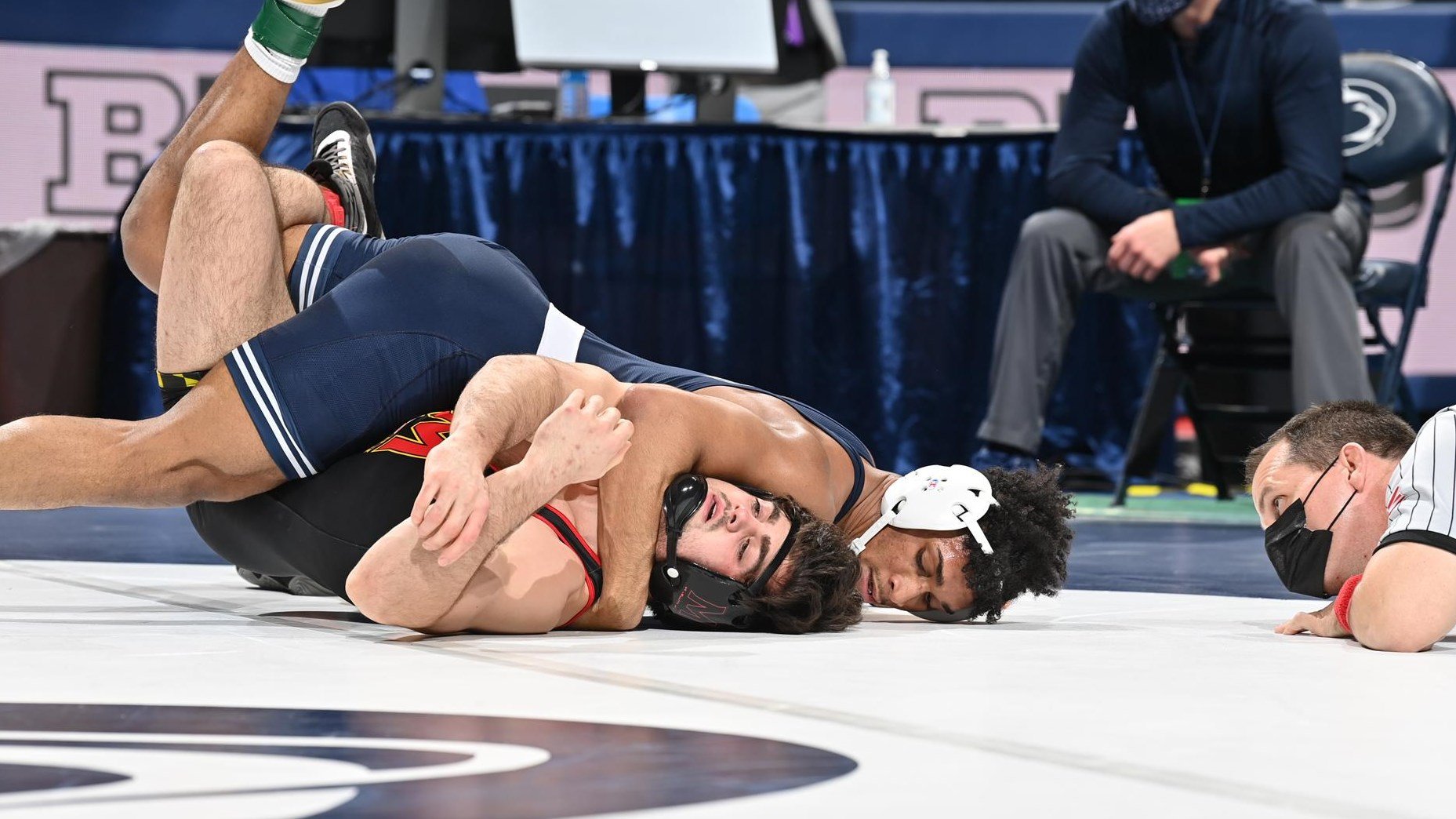 Joining Young as a three-time All-American was Oklahoma State’s Dakota Geer, a redshirt senior who wrestled at Franklin. Geer, fifth at 184 pounds, was one of six Cowboy All-Americans, including 197-pound national champion AJ Ferrrari, on Oklahoma State’s third-place team.

Also competing at the national championships was redshirt sophomore Cole Matthews, who competed scholastically at Reynolds. Matthews was a member of the Pitt squad that finished 11th in St. Louis, the highest placing for the Panthers since 1970.

Starrocci, the third seed at 174 pounds, began his run to the national championship with a 10-2 major decision against Virginia’s Victor Marcelli. He followed this up with an 8-2 victory over Hayden Hasting’s of Wyoming. In the quarterfinals, Starroci downed Kent State’s Andrew McNally, 6-3, before taking out second-seeded Demetrious Romero of Utah Valley, 2-0.

In the finals Starroci found himself facing top-seeded Kemerer, who beat the NIttany Lion grappler, 7-2, two weeks prior for the Big Ten conference championships. Starroci got his revenge on the sports’ biggest stage, besting the top-seeded Kemerer to finish off an 18-2 campaign.

At Cathedral Prep (2015-2019), Starocci went undefeated as a junior (46-0) and senior (42-0), winning state titles at 160 pounds and 182 pounds, respectively. The four-time district and regional champion was state runner-up at 152 pounds to conclude his sophomore campaign and took eighth at 138 pounds at the end of his freshman season. Starroci had a 160-10 career record as a high schooler.

Young, the Big Ten runner-up, entered the national championship as the fifth seed at 157 pounds. He scored an opening-round 10-2 major decision against Caleb Licking of Nebraska before falling, 3-2, to Penn State’s Brady Berge.

Once in the wrestlebacks, Young reeled off three straight victories, earning, in order, an 8-2 win over Benjamin Barton of Campbell, a 5-2 decision against Oregon State’s Hunter Willis, and a 10-2 major in a match-up with Jacob Wright of Wyoming. Young’s run came to an end in the consolation quarterfinals, where he suffered a 3-2 loss to Minnesota’s Brayton Lee. Rebounding from his loss to the eventual sixth-place finisher, Young took out Wyatt Sheets of Oklahoma State, 3-2, for seventh. He finished the 2021 season with a 15-5 record.

Young compiled a 116-9 record at Punxsutawney High School (2012-2016). He advanced to the state tournament each of his four years. After not placing as a freshman, he took fifth as a sophomore (138 pounds), fourth as a junior (152 pounds), and won it all as a senior (160 pounds). Young was a four-time district champion and three-time regional titlist, his only blemish a runner-up finish as a sophomore.

Geer, who took third-place at the Big 12 tournament, was the 11th seeded 184-pounder at the national championship. He earned a 10-0 major decision against North Carolina’s Devin Kane in the first round, but then fell, 7-3, to sixth-seeded John Poznanski of Rutgers.

On the other side of the bracket Geer won four in a row, advancing to the consolation semifinals. He began with an 18-0 technical fall against Dominic Ducharme of Cal State-Bakersfield; beat Iowa State’s Samuel Colbray, 9-4; decisioned eighth-seeded Taylor Venz of Nebraska, 8-2; and scored a 7-5 victory over Virginia Tech’s Hunter Bolen, the fifth seed who placed seventh.

In the consolation semifinals, Geer once again fell to Poznanski, losing 10-6 to the subsequent fourth-place finisher. Geer came back with a 6-0 decision against seventh-seeded Brit Wilson of Northern Illinois for fifth, running his season mark to 27-7.

While at Franklin High School (2012-2016), Geer posted a 145-13 mark, losing just once each of his last two seasons. A three-time state qualifier, Geer took first at 180 pounds as a junior. He placed third his sophomore (170 pounds) and senior (182 pounds) seasons. Geer was a three-time district champion and two-time regional titlist (he was second as a sophomore).

Matthews was third at the ACC championships for the second consecutive year. The national championship’s 16th seed at 141 pounds, Matthews took an opening-round victory over 17th seeded McKenzie Bell of Rider. This victory earned him a bout against top-seeded Jaydin Eierman, which he lost 5-3. Iowa’s Eierman fell to Penn State’s Nick Lee in the finals, one of the Hawkeyes’ two runner-ups.

The former Reynolds grappler’s championship tournament ended in his next bout, a 6-3 loss to Perdue’s Parker Filius.

Matthews was 177-15 as a Raider (2014-2018), winning states his freshman (120 pounds) and senior (138 pounds) seasons. He placed third at 126 pounds as a sophomore and second at 138 pounds as a junior. Additionally, he was a four-time district champion and three-time regional winner (taking second his sophomore year).