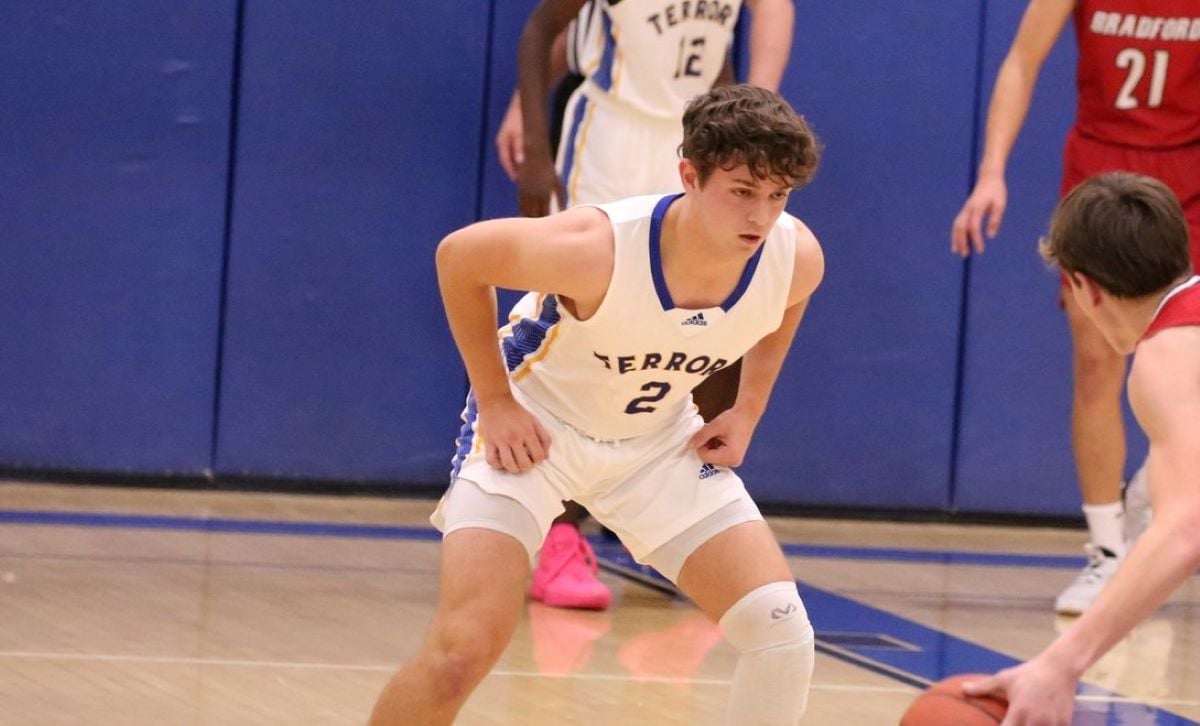 Austin Cousins led the way for the Terrors draining seven of the triples while scoring a career-high 25 points.

Five of Cousins’ 3-pointers came in the first quarter when Otto-Eldred hit 10 3-pointers to outscore Smethport 30-16.

Landon Francis knocked down five 3-pointers, including three in the opening eight minutes, and collected a double-double with 17 points and 12 assists.

Manning Spain, who hit both of long-range shots in the opening frame, added 13 points, four steals, and three assists, and Brax Caldwell chipped in 10 points.

COUDERSPORT, Pa. – Behind strong free-throw shooting from Reilly Streich, Coudersport pulled away from visiting Austin in the fourth quarter to get a 54-39 NTL victory.

Streich hit 9 of 10 free throws in the fourth quarter as the Falcons took a 35-30 advantage after three and turned it into a 15-point win.

Drew VanWhy had a team-high 15 points to go with four assists for Coudersport.

Streich had a double-double with 14 points and 11 rebounds with Micah Batson adding 11 points, four assists, and three steals.

Ryan Shaffer and Maddox Baughman each added 11 points for the Red Raiders.

The teams were tied at 17 at the end of the first quarter before the Gators outscored the Tigers 21-10 in the second quarter to take a 38-27 halftime lead.

That was part of a three 3-pointer first half for Troupe, who had his second-highest output of the season with nine points.

In all, 11 different Gators etched their names in the scorebook led by 11 points from Drew Evens who also had three steals and three assists.

Blaine Moses grabbed a team-high eight rebounds for Port Allegany while adding seven points, while Noah Archer dished out six assists to go with six points. Braylon Button chipped in eight points, and Funk also had seven in the victory.

Braiden Cimino helped Galeton to the strong start by hitting three of his six 3-pointers in the opening quarter on his way to a game-high 22 points.

The teams were tied at 39 after 24 minutes before Jordan Hesdon went off for 11 of his game-tying high 17 points in the fourth quarter to lead the Lions to victory.

Rylie Klingensmith scored 16 of his 17 points in the first three quarters for C-L while hitting three 3-pointers.

Jack Callen had a team-high 11 rebounds to go with two assists and seven points for C-L.

The Gremlins trailed 26-23 at halftime before Braden Grossman scored nine of his 11 points in the third quarter to turn the game around. Grossman also finished with eight rebounds.

Micah Rupp netted nine of his game-high 18 points in the second quarter for Karns City and also had seven rebounds, seven steals, and three blocked shots.

Alex Preston scored all 17 of his team-high points from the second quarter on for A-C Valley who also got 15 points from Jay Glover and nine from Ryan Cooper, who hit three 3-pointers.

Swisher had 23 points and 13 rebounds and was joined in double-digit points by Andrew Green, who scored 17, and Marek Hoyt, who tickled the twine for 15 points.

Brendan Paisley added 11 rebounds and four points in the win

Jake Lobaugh and Isaiah Jackson each added seven points in the win for the Rams.

ST. MARYS, Pa. – Elk County made the short trek across town and came away with a 55-45 win over St. Marys in a game that counted in both the AML and D9 League standings.

The Crusaders had to overcome a slow start to get the win, as they trailed 12-8 at the end of one quarter of play before outscoring the Dutch 13-3 in the second quarter to take a 21-15 halftime lead.

Jordan Wasko then scored 14 pf his team-high 18 points in the third quarter to help expand the lead to 41-26 going the final eight minutes.

Adam Straub added 143 points for ECC in the win.

BROOKVILLE, Pa. – Clayton Cook scored 17 points and pulled down 12 rebounds as Brookville clamped down on visiting Bradford in a 49-28 D9 League win.

The Raiders led 20-10 at halftime, then outscored the Owls 26-9 in the third quarter and Cook made all five of his shots from the field and scored 10 points in the quarter despite leaving the game with an ankle injury for the final 3:12.

Cook returned for a couple of minutes in the fourth and exited right after the Raiders switched on the PIAA Mercy Rule’s running clock with a 49-19 lead at the 6:41 mark. He nearly outrebounded the Owls himself as the Raiders owned a 39-13 rebound advantage overall.

Connor Marshall and Jack Pete each scored eight points for the Raiders while Chase Wineberg led the Owls with nine points and four rebounds.

McGarry scored a season-high 14 points for the Golden Tide with Fleming adding 12.

Andrew Wassil and Chandler English each chipped in with eight points in the victory.

Redbank Valley led 29-21 at the break before expanding the lead to 49-29 by the end of the third quarter.

The quarter ended on a strange play, as Redbank Valley missed a layup with 2.4 seconds left only to have North Clarion’s Andy Castner accidentally tip the ball into the hoop as he tried for the rebound.

Freshman Braylon Wagner had a season-high 14 points for the Bulldogs while Owen Clouse added 10 points and Aiden Ortz eight.

Devine Picks Up 100th Career Win as GJR Tops Commodore Perry; Hornbeck Has Triple-Double in Oil City Boys’ Win Jan. 13, 2023
YDL Sports Network to Broadcast DCC vs. Redbank Valley Girls Basketball Saturday
This website or its third-party tools process personal data.In case of sale of your personal information, you may opt out by using the link Do not sell my personal information.
×
Manage consent