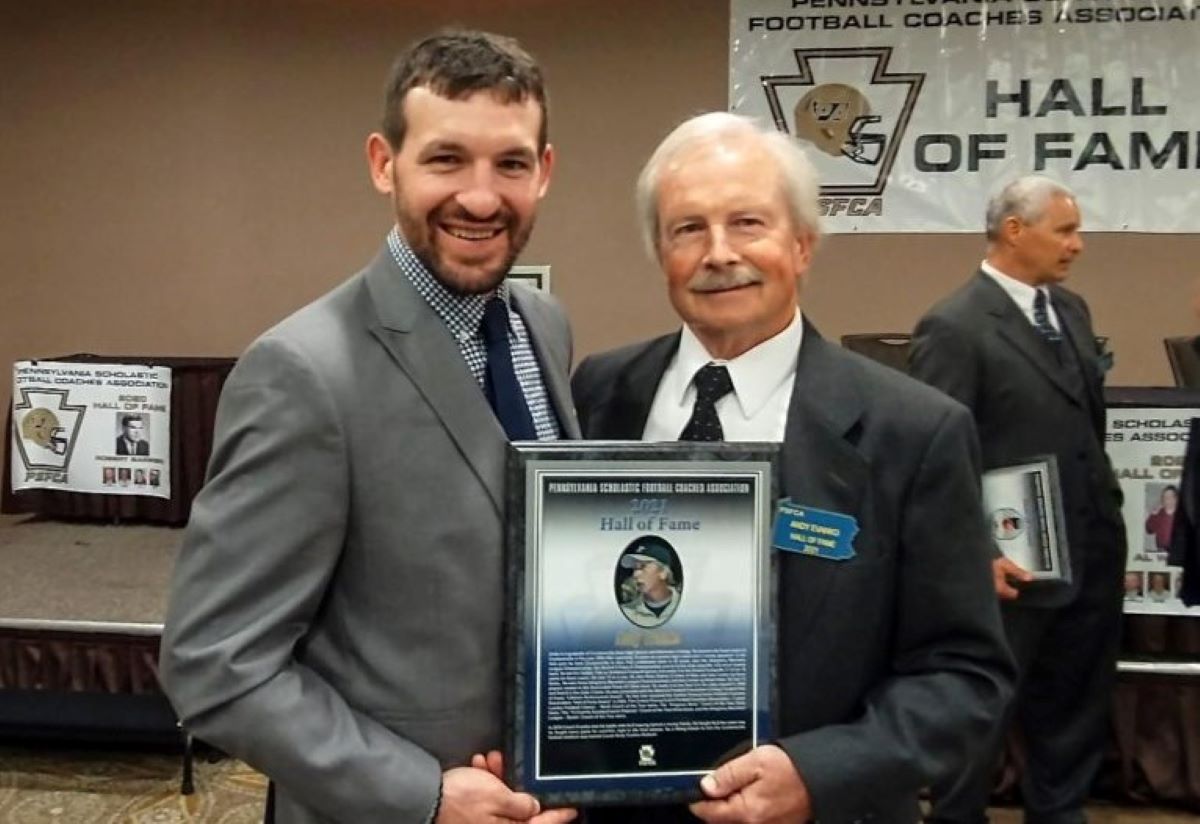 Editor’s note: This story originally appeared on ClarionSportsZone.com and is being republished with permission

“He was Curwensville.” That is how John Evanko described his brother Andy Evanko, the legendary Curwensville Football Coach, in a tribute segment, on WTAJ-TV, that aired several days before Coach Evanko was inducted into the Pennsylvania Scholastic Football Coaches (PSFCA) Hall of Fame 2021 Class.

Coach Evanko, who lost his hard-fought battle with ALS (Lou Gehrig’s Disease) in 2019, was inducted to the Hall on Sunday, May 30, at the Best Western Premier-The Central Hotel and Conference Center, in Harrisburg. The event was held in conjunction with Big 33 and East-West All-Star Games. The inductees were also introduced at halftime of the Big 33 Game, on Memorial Day, Monday, May 31.

There were ten coaches inducted this year, which combined the 2020 and 2021 Classes, as no ceremony was held last year due to Covid-19 restrictions. Coach Evanko was a unanimous selection, in this his first year of consideration. One of the requirements for induction to the PSFCA Hall of Fame is that the coach is out of the profession for a minimum of five years. With a groundswell of support from the Curwensville community, some D9 coaches, and others, which included petitioning the organization; the PSFCA gladly waived the five-year requirement.

In a bit of sad irony, the requirement was also waved for another member of the Class, well-known Berwick coach, George Curry, who also succumbed to ALS.

A Curwensville and Dickinson College graduate, Coach Evanko, spent 16 years as a junior high coach and a varsity assistant. His head coaching record was 150-63.

In his first year, as head coach, in 2000, he took Curwensville to its first undefeated season in 42 years, winning the Allegheny Mountain League Championship, the District 9 Class A Championship, and a berth in the PIAA State playoffs.

His Golden Tide teams made it to the District 9 playoffs 17 of his 19 years (34 district playoff games) as head coach, including the last 15 in a row. Under his mentorship, Curwensville won three District 9 Class A titles and was runner up three times, while also winning three Allegheny Mountain League (AML) Championships, with three second-place finishes.

He had 15 players named to the Associated Press All-State Team.

His 2004 team made it to the PIAA Final Four in the state playoffs and his teams reached the Final 8 in the state three times.

But it was never about “me” with Coach Evanko. As John Evanko, who accepted the honor for his brother said, “He was Curwensville,” caring as much for his players’ personal lives and their future success than their accomplishments on the gridiron.

Nick Sipes, a four-year letter winner at Curwensville and the second all-time leading rusher in District 9 and Coach Evanko’s presenter at the induction ceremony, shared some things from his speech with Clarion Sports Zone (CSZ), including, “He emphasized that we were Student-Athletes, with the emphasis on students first. He always wanted to know what former players were doing, where they were and what career path they had chosen. He would even tell players, ‘if you need anything, and I mean anything, here is my phone number. It doesn’t matter how late, you call me.’ This is something that he truly meant. I had talked to coach many times after graduation. and he was very willing to be a listening ear.”

Sipes with John Evanko who accepted the award for his brother. Nick said, “It is a pleasure, and truly an honor to have been selected by his family to present this award to his brother John Evanko.”

“Coach Evanko loved the game of football. I think he even dreamt about football,” Simko said. “Not only was he my coach, but I had the opportunity to be his neighbor. Even before I was at the varsity level, I was introduced to Coach Evanko through assistant coach Micky Morgillo. I quickly learned that he had a ‘football’ room in his house. This room was on the 2nd story, and I could always tell if he was studying film, even if it was in the summer. I would walk out on my front porch, and see the light on in that room, and I knew he was in football mode. It did not matter the time of the year, that light was always on. He soon realized he was going to be seeing a lot of me, and he welcomed me with open arms to study with him. Not only did he do this to me, but to anyone that ever wanted to watch more films.”

“We were in a playoff game at Clarion University and were going into halftime, our opponent punted the ball to us and we got it around the 45-yard line.,” John Evanko said. “The referee came running up to Andy and asked, ‘Coach, are you going to take a knee?’ and Andy asked, ‘Is there any time left on the clock?,’ knowing full well there was. The ref said, ‘There are 8 seconds on the clock coach.’ And Andy said, ‘Then we are running a play.’

“And that’s the way Andy coached, as hard as he could, right up to the final second. I asked him many years ago after he became head coach, ‘Well how do you like being head coach,’ and he said, ‘I love it.’ And he did. He never took a day off after he became head coach, never took a vacation, always at the school, the weight room, the gym, the practice field or the stadium, trying as hard as he could to find a way to be better.

“The final week he was with us he asked me ‘Did we get the hydration pack ordered?’ and I assured him we did. The next day, ‘Did the booster club get the bus upgrade?’; once again I assured him we did. And in another day he left us. But that was Andy, always thinking of the ‘fellas,’ doing everything he could for the boys and coaching until the last couple of seconds on the clock.

That same drive was seen in the way he battled ALS. John said, “He fought ALS the same way, never giving up, always hoping somehow, someway there would be something to come along that would help.”

Nick mentioned, “Coach Evanko is the epitome of overcoming adversity. The diagnosis of ALS did not hinder his ability or love for coaching. Not only was he instrumental in my career, but he also has had a lasting impact on the community… Even when diagnosed with ALS, that did not slow down or discourage his love for the game. Even though the terrible disease took his ability to talk, it did not take his ability to coach. If he was not pleased with a practice, or attitudes it was still very clear to everyone around him.

“He did not let the disease slow him down, not even for one second. He was still in charge of calling the ‘shots’ on offense and ran practice like he had the previous years. He may have had to use a tablet to call in plays, or to communicate with coaches, but he still got it done. He did not put in any less time when he did when it was his first year as a coach. He truly loved the game, the community, and those who he coached.”

And just as Coach Evanko was Curwensville, it can be said that Curwensville is Coach Evanko. This was and continues to be a two-way love affair between a coach and his team and his hometown.

The Golden Tide published a book entitled Coach – Lessons I’ve learned, both on and off the field, from “Coach.” The full color, 60-plus page commemorative book, is basically a testimonial to Coach Evanko filled with reminiscences from players, assistant coaches, and others, of his impact on their lives and well wishes to Coach Evanko. Proceeds go to the ALS Association of Philadelphia and inside the back cover is information on how you can contribute. There are copies of the book still available.

Nick mentioned, “The community made it known how well the coach was truly loved. After his passing, it was unanimously voted to rename the football field to “Coach Andy Evanko Stadium.” That speaks volumes of what he meant to the town of Curwensville. While his wins and losses, and individual player achievement accolades speak for his ability to coach, it is all of the “silent” life coaching moments that many who played for him, have fond memories, including myself. It was an honor to have known him not only as a coach, but also as a true friend. He is dearly missed within the community, but his legacy of coaching will long live on through the impact he made on ALL of his players.”

The stadium, formerly Riverside Stadium, was renamed and christened “Coach Andy Evanko Stadium,” the evening of the Tide’s home opener, against Cameron County in 2019. There have been and continue to be improvements made to the facility including: a new entrance that will have pillars and an archway with the words “Coach Andy Evanko Stadium” across it, to be installed this summer and dedicated at the first home game, a field house upgrade and a new restroom facility.

A coach loving his community and a community loving their coach, a legacy that will live on for future generations.

There is no better way to conclude this article on Coach Evanko’s induction to the PSFCA Hall of Fame than to quote Coach Evanko’s wife Tina, I will always be Andy’s biggest fan. A message for Coach Evanko in heaven… thanks to all the young men that worked so hard to make this possible.”

A Labor of Love: Bill Howard Honored by District 9 for 50 Years of Service as an Official
St. Marys Graduate Joe Beimel Signs Minor League Deal with Padres
This website or its third-party tools process personal data.In case of sale of your personal information, you may opt out by using the link Do not sell my personal information.
×
Manage consent