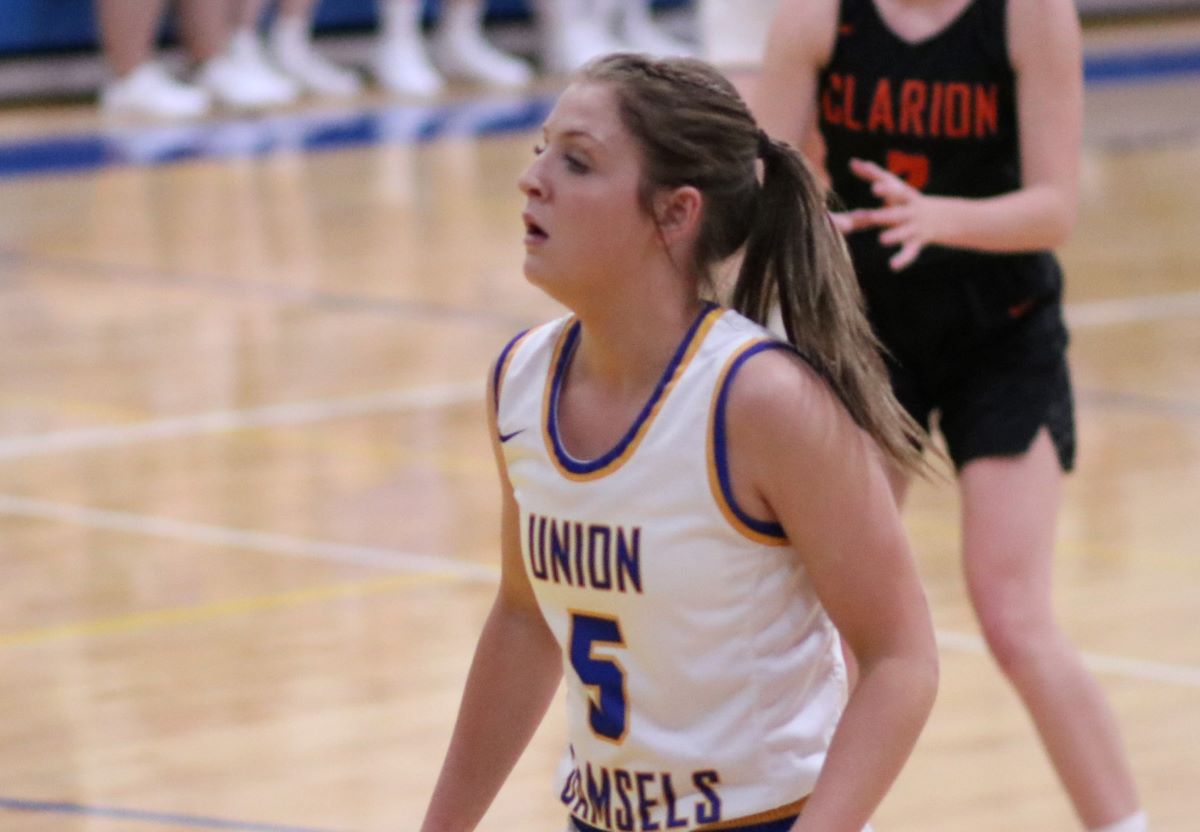 FRILLS CORNERS, Pa. – There is a new queen – at least for now – on top of the KSAC Small School/North Division after Union overcame a seven-point deficit heading to the fourth quarter to end North Clarion’s 49-game conference win streak with a 48-44 road victory.

Croyle and Dominika Logue played key roles in the Golden Damsels comeback, as the duo combined to score the first seven points of the fourth quarter to erase a 37-30 deficit heading to the frame then teamed up again late with the game on the line.

“I just know to go whenever Dominika get the ball and try to get open underneath,” Croyle said of her go-ahead layup. “I know she will give it to me, and we will get it in.”

Union (6-1 overall, 4-0 KSAC Small School) became the first team to beat North Clarion in a game that counted in the KSAC standings in exactly six years. The She-Wolves’ last conference loss was Jan. 6, 2016, at Karns City. 63-55.

“Wow, I did not realize that,” Union head coach Ally Kepple said. “That is awesome. These girls have been working hard, especially the seniors. This is their fourth year, and they wanted it. I thought they did a great job tonight.”

It looked like North Clarion (7-1 overall, 3-1 KSAC Small School) was in good position to get to 50 straight conference victories when it used an 8-0 third-quarter to take a 35-27 lead with just over 11 minutes left in the game.

But shortly after that run, leading scorer Gwen Siegel picked up her fourth foul and joined fellow starter Amya Green on the bench with four infractions.

Neither player started the fourth quarter, but North Clarion head coach Terry Dreihaup was forced to put them both back in with 6:18 to play in the game after the 7-0 Union run to start the fourth quarter tied the game at 37. Siegel ended up fouling out just a little over two minutes later with her team up 42-40 (the game ended up tied at 42 after the player she fouled, Hailey Kriebel, hit both free throws).

“We just have to learn how to play clean basketball and stop getting stupid fouls,” Dreihaup said. “When you take one of your fastest guards out of the game and you take your post player out of the game, it kind of changes your game plan.”

Just before Siegel fouled out with 4:04 left, the She-Wolves had taken a 42-37 lead on a 3-pointer by Emma McFarland with 4:47 left only to have Logue answer back with a triple of her own 26 seconds later.

After Kriebel tied the game at 42, North Clarion did take one final lead on a Maria Bauer basket off a Lauren Lutz pass with 3:09 left.

Kriebel, though, tied the game at 44 with 2:53 to go setting up Croyle’s go-ahead basket.

“We just told the girls (going into the fourth quarter), hey it’s go-time,” Kepple said. “We have to take it to them. We have to look to score, to get the ball to the hoop because that was a big gap for us there.”

Kennedy Vogle then sealed the win with a pair of free throws with 16.4 seconds to play, and the Golden Damsels celebrated like they had won a District title when the horn sounded.

Kepple didn’t mind the celebration, but also reminded her team there is a long way to go.

“We just told them, hey it’s every other day from here on out,” Kepple said. “We have to be ready to go at all times.”

Dreihaup wasn’t worried about the loss or the long conference-win streak ending – heck he didn’t even know about the win streak until informed of it just prior to the game.

“I think the only one who knows of the streak might be you,” Dreihaup said. “I had no idea. The girls work hard all the time. They come to play. Unfortunately, we just came up a little bit short tonight.

“I think back a few years ago, I think we lost two games in a row, and I think we went on to make the final eight (in the PIAA). Losing a game doesn’t really matter. We just have to get better and learn from our mistakes.”

Kriebel led Union with 15 points while tying for the team lead with seven rebounds and adding six steals.

Siegel had a double-double for North Clarion with 11 points and 10 rebounds to go with two blocked shots, while Emma McFarland added nine points, six steals, and four rebounds.

The teams will meet again Feb. 15 in Rimersburg in the regular-season finale for both squads.

Union returns to action Monday at Karns City, while North Clarion is at Keystone Wednesday.

Jan. 6, 2022 D10 Boys/Girls Hoops: Slippery Rock Girls Outlast Grove City; Greenville Gets Overtime Win over Lakeview
Jan. 7, 2022 District 9 and District 10 Basketball Schedules Powered by Hunter’s Station Golf Club
We use cookies on our website to give you the most relevant experience by remembering your preferences and repeat visits. By clicking “Accept All”, you consent to the use of ALL the cookies. However, you may visit "Cookie Settings" to provide a controlled consent.
Cookie SettingsAccept All
Manage consent