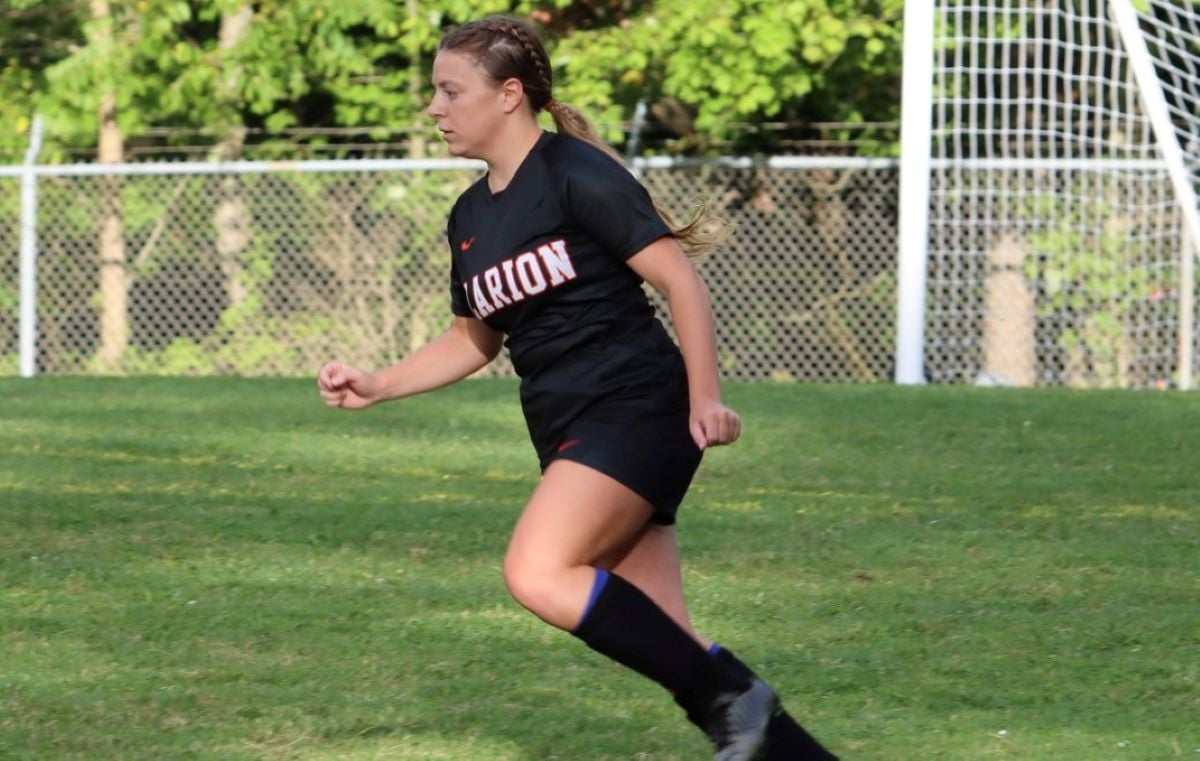 Lexi Coull scored the game-winning goal for Clarion with just under 11 minutes to play. Photo courtesy of Clarion girls soccer

Coull was sitting on the Clarion bench after a dangerous high kick on an aggressive play at the Redbank Valley net when she and Redbank Valley keeper Emma Kemmer went for a loose soccer ball resulting in a yellow card on Coull.

Clarion head coach Chris Schonbachler removed her from the contest per rule for a few minutes before putting her back in the game with just under 13 minutes left.

That decision paid big dividends when Coull beat Kemmer from the right side with 10:43 to play to give Clarion a 3-2 win over the rival Lady Bulldogs.

“It was the longest five minutes of my life,” Coull, named the Co-Allegheny Grille of Foxburg Player of the Game along with Clarion keeper Chesney Boggess, said. “I was excited to go back in. I was hoping we could score one more before the end.”

Coull made sure the goal happened intercepting a clearing pass by Redbank Valley along the far sideline and then using great body position to keep the ball from going out of bounds. She then went around a pair of Lady Bulldog defenders before using a third as a potential screen. Her shot then found the upper corner of the far post for the go-ahead tally.

“When I hit it, I thought (Kemmer) was definitely going to save it because it was at the top back corner. It was just insane.”

Redbank Valley, which led 1-0 at halftime and 2-1 eight minutes into the second half, tried to rally, and the Lady Bulldogs’ best chance to tie the game may have come in the closing seconds when Ember Hetrick put a strong shot on net from the left side from just outside the top of the box that Boggess had to come out and punch down before corralling the ball with 20 seconds to play.

“It was just a high shot,” Boggess said. “It was just right at me. I just caught it. It was right there.”

The Lady Cats trailed 1-0 at halftime, as Redbank Valley’s Elena Root scored on a penalty kick with 8:47 to play in the opening half.

Root chipped the ball just past Boggess inside the right post.

Down one at the break, Schonbachler’s message was a simple one, Boggess said.

It took Clarion all of 28 seconds into the second half to tie the game with JJ Wilson beating Kemmer off a rebound of a shot by Coull.

Alex Leadbetter had feed cool in the middle who took a couple of dribbles and then put a shot that forced Kemmer to dive to her left to make the save. But the ball came right to Wilson, who buried in the back of the net to tie the game at one.

Redbank Valley went back ahead seven minutes later on a goal from Hetrick.

Shoemaker chipped a ball past a Clarion defender to Hetrick, whose shot somehow trickled through Boggess’ legs and into the net to give the Lady Bulldogs a 2-1 lead with 32:04 to play.

Clarion tied the game when it was awarded a penalty kick with 29:05 left, and Anna Gribik beat Kemmer, who was staring into a bright sun, to the far left post.

The win avenged an earlier 4-3 loss to Redbank Valley for Clarion.

“It feels so food, finally,” an elated Coull said.

Watch Coull and Boggess in their postgame interview

Oct. 17, ’22 VB Recaps: Coudy’s Ruter Records 500th Dig This Season; Jenna Dunn Has Huge Night in C-L Victory; Reynolds Wins
Oct. 18, 2022 Volleyball and Soccer Schedule
This website or its third-party tools process personal data.In case of sale of your personal information, you may opt out by using the link Do not sell my personal information.
×
Manage consent