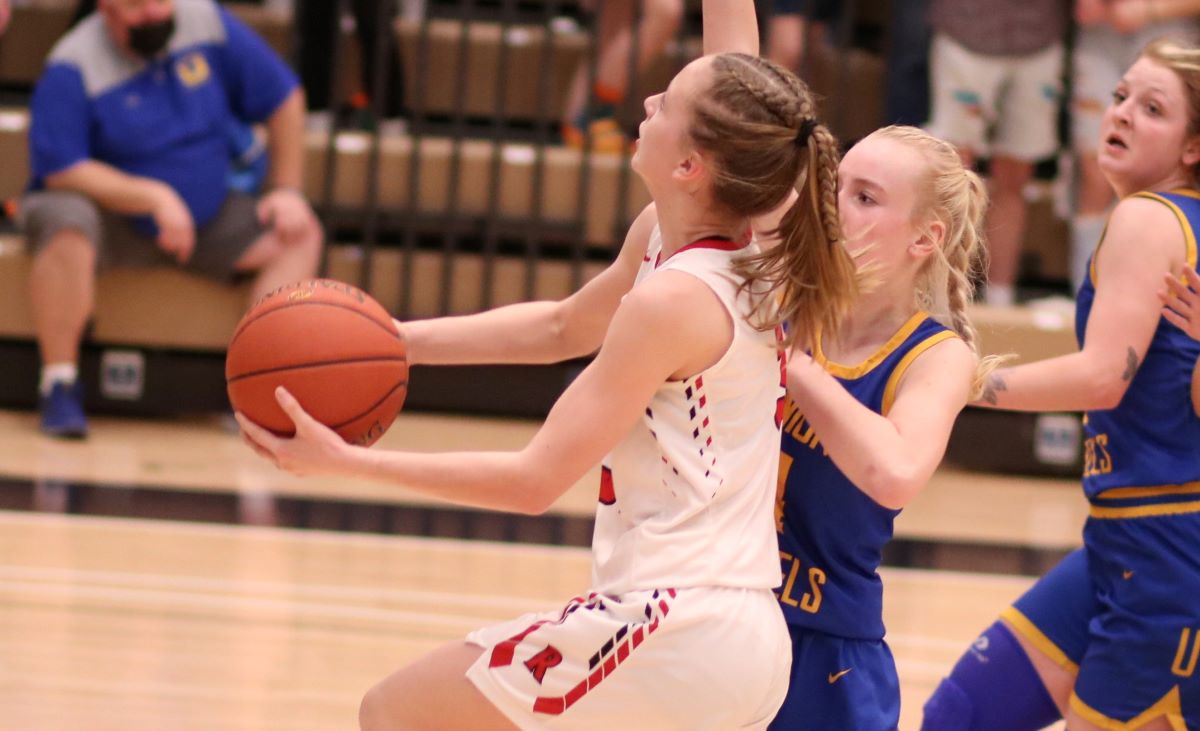 Mylee Harmon of Redbank Valley goes in for a shot while being defended by Union's Hailey Theuret during Thursday's KSAC Semifinal game won by RV. Harmon had 24 in the gamePhoto by Shelly Atzeni. Check out more of Atzeni's work here

Here are recaps from all six games.

The old saying is defense travels – meaning even when you don’t have a great offensive night if you play great defense you still have a chance to win.

That was exactly what happened for the North Clarion girls’ basketball team in its 33-22 KSAC Semifinal victory over Karns City at Clarion University Tippin Gym.

Those numbers usually lead to a loss.

But North Clarion’s defense made sure that wasn’t the case.

The She-Wolves shut out Karns City in the fourth quarter allowing them to take a one-point lead, 23-22, and turn it into the 11-point victory. This after North Clarion allowed just two second-quarter points to turn an 11-9 deficit after eight minutes into a 15-13 halftime lead.

“Defense won us the game,” North Clarion head coach Terry Dreihaup said. “We couldn’t get the ball in the hoop, and we were struggling to get the ball inside. We were making some pretty awful passes. But, defensively, when you hold a team under 30, I am pretty happy about it. When you hold them to 22 I am even happier about it. I am just real proud of the way they played tonight.”

Gwen Siegel played a huge role in the victory with 10 points, 16 rebounds, and four blocked shots.

She was at her best in the fourth quarter when she collected 10 rebounds and blocked a pair of shots while scoring twice in a span of just under a minute late in the quarter to expand North Clarion’s lead from five. 27-22, to nine, 31-22, thanks to baskets at the 1:24 mark on a give-and-go and with 30.4 seconds to play.

Siegel talked about her performance, the win, and getting back to the finals for the sixth straight time (2016-20, 22 – there wasn’t a championship game in 2021 because of COVID-19).

“The girls worked hard all year,” Dreihaup said. “This is one of their goals. This is our second season. The first season ended the other night with Union. Yeah, it’s only two games but it’s another season. That’s what we focus on, trying to finish the season strong and then move on to the next one. I think they have come a long way since we had a little bit of a hiccup in January. I think they have rebounded and played great, great defense.”

North Clarion is now 19-3 on the season with Karns City falling to 13-9. The Lady Gremlins season isn’t over, as they will enter the District 9 Class 3A playoffs.

Freshman Mylee Harmon scored 22 of Redbank Valley’s 36 points during a game-deciding 36-8 run for Redbank Valley, as the Bulldogs advanced to the KSAC Title game with a 65-35 win over Union in the KSAC Semifinals at Clarion University’s Tippin Gym.

The Lady Bulldogs led 20-14 halfway through the second quarter before going on the run that lasted into the early moments of the fourth quarter and pushed the lead to 54-25.

“This is our stretch run,” Redbank Valley head coach Chris Edmonds said. “Mylee has really embraced it and stepped up and become one of the leaders on the team.”

She was helped in the scoring department by Alivia Huffman, who scored 15 points, including eight in the third quarter, after sitting out most of the first half in foul trouble, while Madison Foringer had 10 points and 11 rebounds.

Huffman and Caylen Rearick, who had three points, talked about getting back to the KSAC Title game for the second straight time (2020 and 2022 – no title game in 2021 because of COVID-19).

“One of our goals was to make it to the KSAC finals,” Edmonds said. “They are very excited about it. The girls are extremely ready for the KSAC championship.”

Redbank Valley is 19-4 and Union is 13-7. The Golden Damsels season isn’t over as they will advance to the District 9 Class 1A playoffs.

DUBOIS, Pa. – Kayley Risser scored nine of her game-high 20 points in the fourth quarter to help DuBois Central Catholic hold off an upset attempt by visiting Kane, 51-47, in the AML girls’ semifinals at DCC.

Lexi Berta hit four first-half 3-pointers for the Lady Cardinals to keep them in the game early, as DCC trailed 132-10 at the end of the first quarter before taking a 25-23 halftime lead.

Kane fought back and went back ahead, 37-36, going to the fourth quarter before Risser hit a pair of baskets and made 5 of 9 free throws to lead DCC to the win.

The Lady Crusaders trailed 10-2 at the end of the first quarter before outscoring the Lady Rovers 15-4 in the second quarter to take a 17-14 halftime lead.

Lucy Klawuhn hit a pair of 3-pointers in the second quarter to help jump-start the ECC offense, while Sami Straub added five points.

Klawuhn hit three triples on the night and finished with 11 points and five steals.

The Lady Crusaders are now 20-3 on the season, while Brockway fell to 15-7. The Lady Rovers will face Clarion-Limestone in the District 9 Class 2A title game.

RIDGWAY, Pa. – Just three days after losing in overtime to Johnsonburg, Ridgway turned to Dan Park to lead them past the visiting Rams, 49-36, in the AML boys’ semifinals.

Park scored a game-high 26 points for the Elkers, including 16 in the middle two quarters when Ridgway outscored Johnsonburg 25-14.

Aaron Sorg added eight points, all in the first quarter when he hit a pair of 3-pointers, for the Elkiers, while Dom Allegretto had six tallies.

Ridgway will take on Elk County Catholic in the championship game at 8 p.m. Saturday, Feb. 19, at St. Marys High School.

The Elkers are now 16-5 on the season with Johnsonburg dropping to 11-12. The Rams will participate in the District 9 Class 1A playoffs.

ST. MARYS, Pa. – A little over a month ago, DuBois Central Catholic beat Elk County Catholic for the first time in nearly 12 years.

The Crusaders weren’t about to let it happen twice in a row.

Wasko scored seven of his points in the second quarter to help the Crusaders outscore the Cardinals 18-9 in the frame to take a 30-18 halftime lead.

The Crusaders are now 19-4 on the season, while DCC fell to 16-7. DCC will participate in the District 9 Class 1A playoffs.

One for the Books: Fairview Girls Hold off Mercyhurst Prep to Complete Undefeated Regular Season
Feb. 18, 2022 District 9 and District 10 Basketball Schedules Powered by Hunter’s Station Golf Club
This website or its third-party tools process personal data.In case of sale of your personal information, you may opt out by using the link Do not sell my personal information.
×
Manage consent