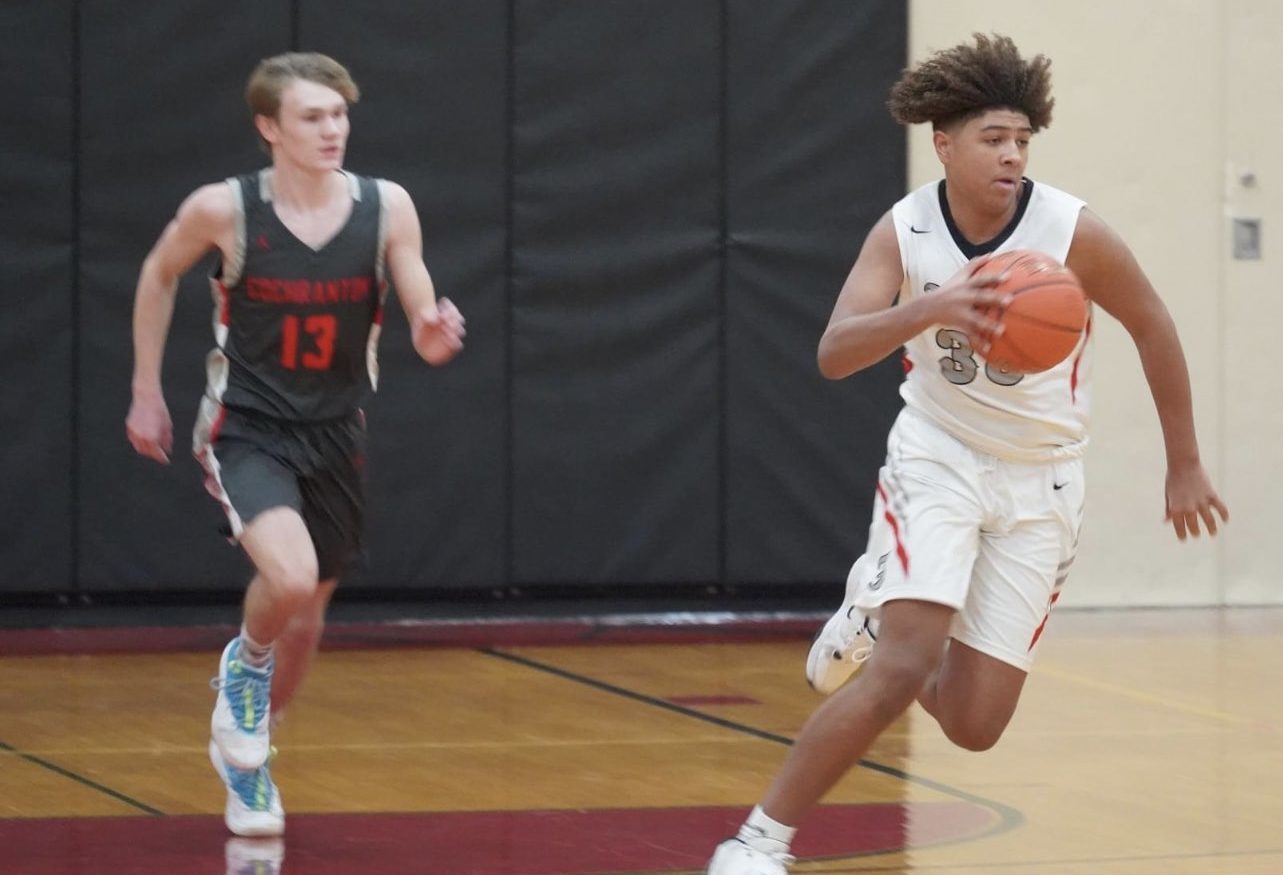 Damon Curry came up huge during the second quarter run for the Knights, scoring nine of his game-high 17 points during the surge, while Jalen Wood, who finished with 14 points, drained a pair of 3’s during the run.

Colon, meanwhile, drained six 3’s and finished with 27 points in the win, as Titusville rallied from a six-point halftime deficit.

Wyatt Lookenhouse added 15 points for the Knights, while Kyler Black added 14 points, and Johnny Palmieri and Kael Hunt 10 points each.

Brady Greco scored 11 of his 18 points in the second half, one of three Saegertown players in double figures.

Bryce Drayer scored 13 of his 14 points in the second half for Union City, while Josh James added 11 points.

Cochranton outscored Maplewood 30-11 in the second quarter en route to the win.

Dominic Matt was also in double figures for Cochranton with 11 points, while Walker Carroll added nine.

Gavin Lutz poured in 22 points for Grove City, eight of which came in the fourth quarter.

Nathan Greer and Brett Loughry were both in double figures for Grove City with 15 points each.

Parker Schmidt and Tristin Mazzadra were also in double figures for the Blue Devils, scoring 16 and 15 points, respectively.

Prep’s Jake Sambuchino scored 13 points and had a game-winning shot attempt at the buzzer, which was off the mark, as Prep suffered its first loss of the season.

Amaree Pickens added 10 points for Cathedral Prep, which will meet Canisius (N.Y.), who was defeated by Lincoln Park 86-78, in the consolation game on Saturday.

Jeremy Frazao added 13 points for the Tigers and John Seyboldt 10.

Jesse Jong had 12 points for EFC.

It was another balanced effort for McDowell, as Kamden Kramer led the way with 13 points, while Tyler Grove and Brody Paris added 11 points each.

Blayze Myers chipped in with nine points for the Trojans.

HARBORCREEK, Pa. – Nick Krahe had a monster game with 31 points and 15 rebounds as Harbor Creek earned a 67-45 Region 7 win over Fort LeBoeuf.

Braylen Wilson also had a double-double for the Huskies with 14 points and 17 rebounds, while JT DelSandro had eight assists.

GROVE CITY, Pa. – Farrell put up 58 points in the first half on its way to an 87-38 win over George Junior Republic.

It was a balanced effort for Farrell, as five players were in double figures and 11 found their way into the scoring column.

Lamont Samuels Jr. led the way with 13 points for the Steelers, while Khanye Matthews and Kylon Wilson had 12 points each, Nasir O’Kane 11, and Malachi Owens 10.

Bahir Green and Elijah Gist had 17 points each for GJR.

Luke Mild had 14 points for the Big Reds, while Gio Rococi added 11.

GREENVILLE, Pa. – Oil City jumped out to a 12-point lead in the first quarter and never looked back in a 57-24 non-region win over Greenville.

Jake Hornbeck led a balanced effort with 16 points for the Oilers, while Sayyid Donald added nine and Cam VanWormer and Ethen Knox seven points each.

Bubba Palmer was also in double figures for Mercer, which outscored Rocky Grove 35-13 in the second and third quarters.

Thorsten Hart and Simeir Wade were also in double figures for Kennedy Catholic with 14 and 12 points, respectively, while Remington Hart added eight points.

GUYS MILLS, Pa. – Sadie Thomas scored 16 of her 21 points in the first half as Maplewood earned a 46-24 non-region win over Franklin.

Savannah O’Hara was also in double figures for Maplewood with 12 points, while Madison Eimer added eight.

Jan. 6, 2023 Luton’s Plumbing, Heating, AC Wrestling: Meadville in Second After Day 1 at Tool City; Brookville Edges GM; Hickory Falls to GM
Klawuhn, Strong Second Half Help ECC Girls Down DCC on the Road
This website or its third-party tools process personal data.In case of sale of your personal information, you may opt out by using the link Do not sell my personal information.
×
Manage consent